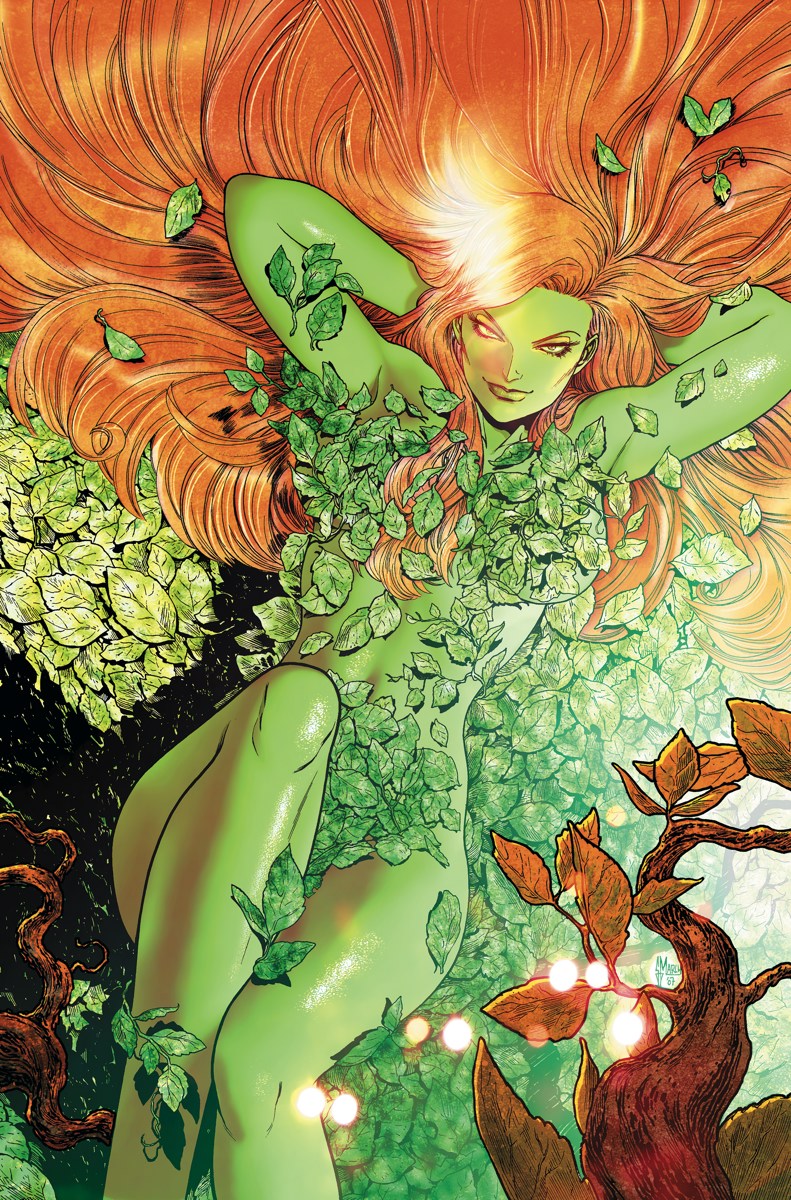 DC Comics has released some advanced solicitations for Batman-related graphic novels and trade releases that will be available throughout the months of September and October of 2016. Several of these are for collected editions of current and former ongoing titles (Batman Beyond Vol. 2 TP, Batman Vol 8 TP, Harley Quinn Vol. 4 TP, Justice League Vol 7 TP, Robin Son of Batman Vol 1 TP, Suicide Squad Most Wanted Katana TP, Titans Hunt TP) as well as other collected editions that predate or are outside the current main DC line (Batman: Arkham Knight – Genesis TP, Justice League 3001 Vol 2 TP, Poison Ivy: Cycle of Life and Death TP).

Other noteworthy titles for TBU fans include Batman: Arkham Poison Ivy TP collecting various classic Poison Ivy stories, The Art of DC Comics Bombshells which is a collection of cover art created especially for the Bombshells line of comics and collectibles for $39.99, The DC Universe by Neil Gaiman Deluxe Edition HC for $29.99 which collects various Gaiman stories from across his career featuring Batman and many other characters, a new collector’s edition boxed set of The Dark Knight Returns for $49.99, Harley Quinn’s Greatest Hits TP collecting various classic Harley stories,  Superman/Batman: The Saga of the Super Sons TP starring the sons of Batman and Superman from the pages of a variety of World’s Finest issues for $16.99, and a new omnibus of Silver Age Teen Titans comics for $75.00.

BATMAN BEYOND VOL. 2: CITY OF YESTERYDAY TP
Written by DAN JURGENS
Art by BERNARD CHANG
Cover by PHILIP TAN
The war with Brother Eye is over and Neo-Gotham is the only remaining civilized city with thousands of refugees at its gate. Venturing beyond Neo-Gotham’s walls to figure out what remains of Metropolis, Batman runs into The Splicers, a fan-favorite gang from the original Batman Beyond animated series. Collects Batman Beyond #7-11.
On sale SEPTEMBER 28 • 128 pg, FC, $14.99 US

BATMAN VOL. 8: SUPERHEAVY TP
Written by SCOTT SNYDER
Art by GREG CAPULLO, DANNY MIKI and JOCK
Cover by GREG CAPULLO and DANNY MIKI
After his deadliest battle to date, Batman is bruised, battered and scarred. And forever changed. Now, a figure in an 8-foot mechanized suit of armor roams the streets of Gotham City. More powerful than ever before, Batman’s pursuit of justice has never been more swift or efficient. But who is the new Dark Knight? And why is he…or she here? Plus, learn the secret origin of the strange new villain known as Mr. Bloom! Collects BATMAN #41-45 and a story from DC COMICS DIVERGENCE #1.
On sale SEPTEMBER 7 • 160 pg, FC, $16.99 US

BATMAN: ARKHAM KNIGHT – GENESIS TP
Written by PETER J. TOMASI
Art by ALISSON BORGES and DEXTER SOY
Video game art cover
In this prequel to the smash-hit video game phenomenon Batman: Arkham Knight, learn more about the game’s main villain—or is he really a hero?—with this definitive origin tale. Collected from the 6-issue miniseries, this is a must-have for any fan of the Rocksteady games!
On sale SEPTEMBER 7 • 144 pg, FC, $14.99

THE DARK KNIGHT RETURNS COLLECTOR’S EDITION BOX SET
Written by FRANK MILLLER
Art by FRANK MILLER and KLAUS JANSON
Cover by FRANK MILLER
The anniversary celebration of Frank Miller’s epic interpretation of the Dark Knight’s future continues with this new slipcase edition at DC’s Deluxe Edition trim size that reprints each issue of the original DARK KNIGHT RETURNS miniseries in its own hardcover volume, all in a beautifully designed slipcase. It is ten years after an aging Batman has retired, and Gotham City has sunk into decadence and lawlessness. Now, as his city needs him most, the Dark Knight returns in a blaze of glory. Joined by Carrie Kelly, a teenaged Robin, Batman takes to the streets to end the threat of the mutant gangs that have overrun the city. And after facing off against The Joker and Two-Face for the final time, Batman finds himself in mortal combat with his former ally, Superman, in a battle that only one will survive.
On sale NOVEMBER 2 • Four 48-page books, FC, 7.0625″ x 10.875″, $49.99 US

HARLEY QUINN VOL. 4: A CALL TO ARMS TP
Written by AMANDA CONNER and JIMMY PALMIOTTI
Art by CHAD HARDIN, JOHN TIMMS, BRET BLEVINS, MORITAT, MIKE MANLEY and others
Cover by AMANDA CONNER
Harley Quinn and her Gang of Harleys are hitting the road! As if Hollywood wasn’t weird enough already, now Harley’s made her way to Tinseltown, and she’s about to have the most destructive fifteen minutes of fame ever. Will the industry survive Harley’s Hollywood hijinks, or will the City of Angels fall from grace? And will Coney Island be able to contain Harley’s newfound celebrity status? Find out in these tales from issues #17-21 and the HARLEY QUINN ROAD TRIP SPECIAL #1.
On sale SEPTEMBER 14 • 176 pg, FC, $16.99 US

JUSTICE LEAGUE 3001 VOL. 2: THINGS FALL APART TP
Written by KEITH GIFFEN and J.M. DeMATTEIS
Art by HOWARD PORTER
Cover by SCOTT KOLINS
As the evil Lady Styx and her legion reign over the Commonwealth, an all-new Justice League rises from the ashes of the old. But can they topple a tyrant who’s embraced by the very people she’s conquered, even with the help of Supergirl from the past? In order to do so, they’ll have to defeat Lady Styx’s most lethal agent: Eclipso!Collects JUSTICE LEAGUE 3001 #7-12.
On sale SEPTEMBER 28 • 144 pg, FC, $14.99 US

JUSTICE LEAGUE VOL. 7: DARKSEID WAR PART ONE TP
Written by GEOFF JOHNS
Art by JASON FABOK, JIM LEE, PHIL JIMENEZ, JERRY ORDWAY, KEVIN MAGUIRE, SCOTT KOLINS and SCOTT WILLIAMS
Cover by JASON FABOK
The Justice League came together to stop the forces of Darkseid from destroying Earth five years ago. Now the ruler of Apokolips returns, but this time he’s set his sights on the world-shattering Anti-Monitor. Will the combined might of the Justice League be enough to protect Earth from becoming collateral damage as gods fight? This new title collects JUSTICE LEAGUE #40-44 and a story from DC COMICS DIVERGENCE #1.
On sale SEPTEMBER 21 • 176 pg, FC, $16.99 US

POISON IVY: CYCLE OF LIFE AND DEATH TP
Written by AMY CHU
Art by CLAY MANN, SETH MANN, ROBSON ROCHA, ETHAN VAN SCIVER and others
Cover by CLAY MANN
Life. Death. Poison Ivy has power over both. But can she keep her friends and hold down a regular job at the same time? As Dr. Pamela Isley, she joins the prestigious plant sciences department at Gotham Botanical Gardens, but things quickly get complicated when a fellow scientist is murdered and it looks like the work of Ivy.
Collects the acclaimed six-issue miniseries.
On sale SEPTEMBER 7 • 144 pg, FC, $16.99 US

ROBIN, SON OF BATMAN VOL. 1: YEAR OF BLOOD TP
Written by PATRICK GLEASON
Art and cover by PATRICK GLEASON and MICK GRAY
Before he was Robin, Batman’s son Damian Wayne was raised by his mother, Talia al Ghul, to lead the vicious League of Assassins. In these stories from issues #1-6 of his new solo series, plus the sneak peek story from CONVERGENCE: WORLD’S FINEST COMICS #2, the son of Batman has freed himself from that destiny and is about to embark on a globe-spanning quest to atone for the horrible acts he committed during the most brutal portion of his old life, The Year of Blood!
On sale SEPTEMBER 7 • 176 pg, FC, $16.99 US

SUICIDE SQUAD MOST WANTED: KATANA TP
Written by MIKE W. BARR • Art by DIOGENES NEVES • Cover by CARY NORD
In these stories from SUICIDE SQUAD MOST WANTED: DEADSHOT/KATANA #1-6, Katana needs to know more about Soultaker’s origin if she’s going to have any hope of controlling the sword instead of falling under its influence. Dr. Helga Jace, a Markovian astrophysicist, may be able to shed some light—but before Katana can get the info, Kobra’s forces attack!
On sale SEPTEMBER 14 • 136 pg, FC, $16.99 US

TEEN TITANS: THE SILVER AGE OMNIBUS VOL. 1 HC
Written by BOB HANEY, LEN WEIN, MARV WOLFMAN, MIKE FRIEDRICH and NEAL ADAMS
Art by NICK CARDY, BRUNO PREMIANI, IRV NOVICK, GIL KANE, WALLACE WOOD, NEAL ADAMS and others • Cover by DARWYN COOKE
In these fast-paced tales from the start of the 1960s, the sidekicks to DC’s greatest heroes—Robin, Aqualad, Kid Flash, Speedy and Wonder Girl—form their own team to take on evil! Collected for the first time in a single hardcover, these stories pit our teen team against the Demon Dragster, the Mad Mod, Captain Rumble and many other far-out foes. Collects THE BRAVE AND THE BOLD #54, #60 and #83, SHOWCASE #59 and TEEN TITANS #1-19.
On sale NOVEMBER 2 • 584 pg, FC, $75.00 US

TITANS HUNT TP
Written by DAN ABNETT
Art by PAULO SIQUEIRA, GERALDO BORGES, STEPHEN SEGOVIA, JACK HERBERT and others
Cover by PAULO SIQUEIRA
After having visions of a Teen Titans team the world has never known, in the aftermath of Convergence, the Titan called Lilith is compelled to set out to warn Dick Grayson, Roy Harper, Donna Troy and an Atlantean named Garth of something dark and sinister that she believes is coming after them. Is tragedy in store for the Titans, and where is this mysterious Lilith getting her visions from? Find out in these stories from TITANS HUNT #1-8.
On sale SEPTEMBER 14 • 208 pg, FC, $17.99 US