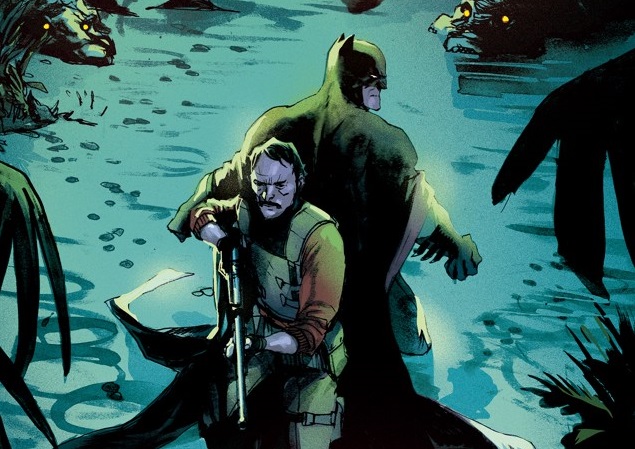 July will be pulling some dollars more from our pockets as Dark Days: The Casting – the second installment of the prelude to Dark Nights: Metal – will be released, at the cost of $4,99, and Nightwing #25 and Justice League #25 will be oversized issues at the cost of $3,99. Those two titles have also suffered changes to their arcs and creative team. Last month, the solicitation for Nightwing read “Blockbuster” parts three and four but those got pushed to July, and Marcus To will no longer be the artist for them, with Miguel Mendonça and Minkyu Jung stepping into his place. While Nightwing had a schedule change, Justice League took a full turn. The “Only Human” arc seems to have been dropped, and now in its place is an arc titled “Afterlives”, with plot lines similar to that of the Justice League: Dark animation. Also, it will no longer be illustrated by Fernando Pasarin and Oclair Albert, but by Andy MacDonald.

In Batman, “The War of Jokes and Riddles” continues, with issue #27 probably being the Kite-Man special that Tom King mentioned when announcing the arc at Fan Expo Dallas. The art for this issue will be done by Davide Gianfelice. As for Detective Comics, we will see Zatanna joining the team in issue #960, but it is uncertain whether it is for good or for just the one issue.

Another female character to be making appearances will be Catwoman. She will be showing up both in Batgirl and the Birds of Prey #11 and Batgirl #12. Still on the female side of Gotham, “The Many Arms of Death” will be getting an epilogue with art by Stephanie Hans in Batwoman #5.

As for the team titles, Trinity’s arc changed its name from “All Along the Watchtower” to “Dead Space”, but the description reads the same. Titans will be getting another one-shot with art by V Ken Marion and Norm Rapmund, while Super Sons, Red Hood and the Outlaws and Suicide Squad will be starting new arcs.

All-Star Batman #12 [07/12] Story by Scott Snyder; art by Rafael Albuquerque and Sebastian Fiumara. “The First Ally” part three. The revelation of the identity of Nemesis might change the relationship between Batman and Alfred.

Batman #26-27 [07/05-19] Story by Tom King; art by Mikel Janin and Davide Gianfelice. “The War of Jokes and Riddles” parts two and three. The villains of Gotham start to align themselves either with Joker or the Riddler. Issue #27 is very much likely to be the special issue focusing on Kite Man.

Detective Comics #960-961 [07/12-26] Story by James Tynion IV; art by Alvaro Martinez and Raul Fernandez. “Intelligence” part three. Zatanna joins the team as they have to face Ascalon, the A.I. built by the Order of St. Dumas.

Batman Beyond #10 [07/28] Story by Dan Jurgens; art by Bernard Chang. “Rise of the Demon” part five. The experimental suit has altered Terry’s mind, as he and Bruce are still trapped in the League of Assassins lair.

Batgirl #12 [07/26] Story by Hope Larson; art by Chris Wildgoose.”Bats and Cats”. Batgirl and Catwoman work together on a case.

Batgirl and the Birds of Prey #11 [07/12] Story by Julie Benson and Shawna Benson; art by Roge Antonio. “Source Code” part two. Oracle has crossed paths with Catwoman in the past, and now she returns to settle some unfinished business.

Batwoman #5 [07/21] Story by Marguerite Bennett and James Tynion IV; art by Stephanie Hans. “The Many Arms of Death” epilogue. This one-off issue will dwell on Kate and Safiyah’s past in Coryana.

Nightwing #24-25 [07/05-19] Story by Tim Seeley; art by Miguel Mendonça and Minkyu Jung. “Blockbuster” parts three and four. Blockbuster has Nightwing locked up in a submarine with Tiger Shark as captain, and to escape he will have to face a multitude of villains. Back in Blüdhaven, Blockbuster and Tiger Shark fight to become the crime boss of the city.

Red Hood and the Outlaws #12 [07/12] Story by Scott Lobdell; art by Dexter Soy. “The Life of Bizarro” part one. Bizarro’s life is in danger, and the Outlaws take him to Gotham to try to save him but come face to face with Solomon Grundy.

Batman/The Shadow #4 [07/28] Story by Scott Snyder and Steve Orlando; art by Riley Rossmo.  The Shadow faces Batman’s rogues gallery in order to save him from the Stag and the Joker.

Batman ’66/Legion of Superheroes #1 [07/19] Story by Lee Allred; art by Michael Allred. A one-shot featuring the 30th-century team of superheroes from the silver age. The Legion goes back in time to enlist the help of Robin, while Batman goes forward to the Legion’s time while chasing after Egghead, who has stolen a time bubble.

Dark Days: The Casting #1 [07/12] Story by Scott Snyder and James Tynion IV; art by Jim Lee, Andy Kubert, John Romita Jr and others. Batman has lost the trust of his allies, and the Joker puts a surprise attack into works.

Justice League #24-25 [07/05-19] Story by Bryan Hitch; art by Fernando Pasarin and Oclair Albert. “Afterlife” parts three and four. The League faces the Demon Three, a supernatural foe, and gets locked out of reality, and Felix Faust helps them getting out of limbo.

Justice League of America #10-11 [07/12-26] Story by Steve Orlando; art by Andy MacDonald. “Curse of the Kingbutcher” parts one and two. The citizens of Vanity, the Ray’s hometown, are getting their wishes granted by a force known as the Might Beyond The Mirror, but a Lord of Order, Kingbutcher, comes to see it undone. The JLA must decide whether to restore reality to its original state or to allow Vanity’s citizens to keep their wishes.

Suicide Squad #21-22 [07/12-26] Story by Rob Williams; art by Gus Vazquez. “Kill your darlings” parts one and two. This arc will be focusing on Amanda Waller. An international conspiracy group known as the People seek her for help, and she finds the woman she had been tracking since the Rebirth issue, Direktor Karla.

Teen Titans #10 [07/26] Story by Benjamin Percy; art by Khoi Pham and Wade von Grawbadger. “Blood of the Manta” part two. Aqualad is forced to join his father, Black Manta, on a journey to find a weapon in the deep ocean. Starfire, questioning Damian’s leadership, recruits Tempest to help track Aqualad down.

Titans #13 [07/12] Story by Dan Abnett; art by V Ken Marion and Norm Rapmund. “Judas Amons Us”. Omen continues investigating who might be the traitor among them. Tension rises inside the team when Roy discovers a blossoming romance between Wally and Donna.

Trinity #11 [07/19] Story and art by Francis Manapul. “Dead Space” part three. The Justice League and the Watchtower are being controlled by an alien force, and the trinity has to find a way to stop it.

Supergirl and Batgirl are still teamed up in SUPERGIRL #11, “Escape from the Phantom Zone” part three [07/12].