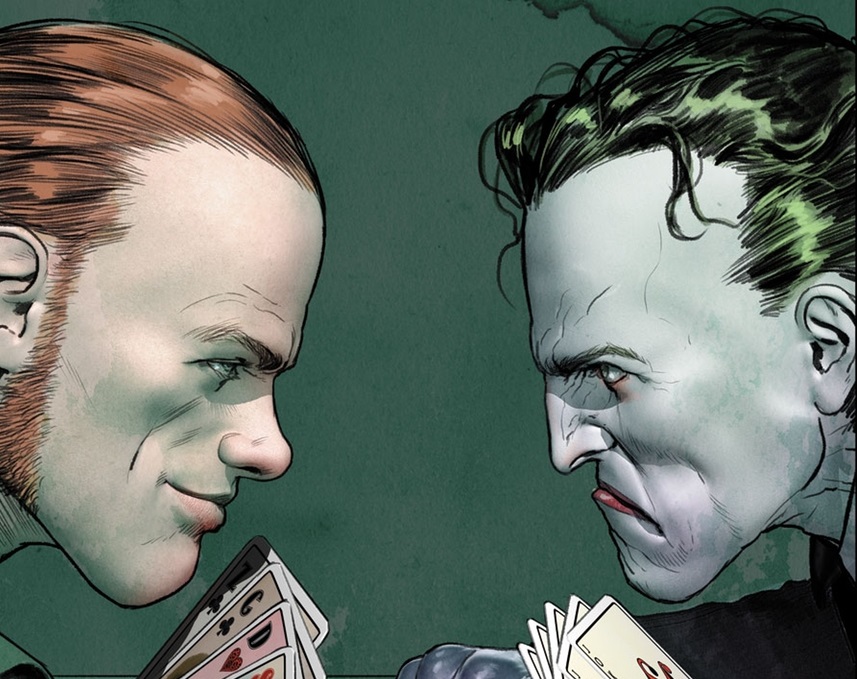 August will see the beginning of two special events. Dark Nights: Metal, the return of the Snyder-Capullo duo, will be hitting shelves together with Nightwing: The New Order, the Elseworlds series set in a dystopic future written by Kyle Higgins with art by Trevor McCarthy. Other special issues coming out August will be the Annual of Red Hood and the Outlaws, featuring Nightwing as a special guest, and Harley Quinn’s special anniversary oversize issue.

For the main Batman titles, “The War of Jokes and Riddles” continues in Batman and “First Ally” in All Star. In Detective Comics, “Intelligence” will be wrapping up and a new arc begins with “Longer Chains”, focused on Spoiler and Anarky.

Catwoman continues to make appearances everywhere, being on the background of the narration in Batman, showing up in Bane: Conquest #4 and being featured together with Poison Ivy in the finale of “Source Code” in Batgirl and the Birds of Prey #11. Other titles whose arcs are wrapping up in Greater Gotham are Batman Beyond and Gotham Academy. The later will not only be the end of an arc but also the end of the series, a fate also met by DC Comics Bombshells.

Starting new arcs are Batgirl with yet another story featuring Nightwing; Nightwing himself, with the return of Spyral and Huntress as a special guest, and Batwoman, which will be James Tynion’s last issue on the title.

As for Greater DC, a new arc will be starting in Justice League, Justice League of America and in Trinity. Trinity, which was in the hands of Francis Manapul before, has a change in the creative team as Rob Williams and Clay Mann take the wheel. Also changing the creative team is Suicide Squad, whose artist will change mid-arc from Gus Vazquez to Agustin Padilla.

All-Star Batman #13 [08/09] Story by Scott Snyder; art by Rafael Albuquerque and Sebastian Fiumara. “The First Ally” part four. Some secrets from the past come out as Batman has to prevent that the Genesis Engine falls into the wrong hands. 40 pg, $4.99 US.

Batman #28-29 [08/02 – 16] Story by Tom King; art by Mikel Janin. “The War of Jokes and Riddles” parts four and five. In the middle of the civil war caused by the rift between The Riddler and The Joker, Batman finds himself in a position where he will have to choose between the lesser of two evils. 32 pg, $2.99 US

Detective Comics #962-963 [08/09 – 23] Story by James Tynion IV; art by Alvaro Martinez, Raul Fernandez and Carmen Carnero. “Intelligence” finale and “Longer Chains” part one. “Intelligence” ends with the final confrontation with Ascalon, the artificial intelligence designed by the Order of St. Dumas to replace Azrael. “Longer Chains” will be focused on Spoiler as she aligns herself with Anarky in hopes of exposing Gotham’s corruption. 32 pg, $2.99 US

Bane: Conquest #4 [08/02] Story by Chuck Dixon; art by Graham Nolan. Bane sets his sights on a network of Eastern European thieves, coming across Catwoman in the process. 32 pg, $3.99 US

Batgirl #14 [08/23] Story by Hope Larson; art by Chris Wildgoose.”Summer of Lies” part one. Dick and Babs’ relationship is once again working as background as Batgirl faces a villain from the past. 32 pg, $3.99 US

Batgirl and the Birds of Prey #11 [08/09] Story by Julie Benson and Shawna Benson; art by Roge Antonio. “Source Code” finale. Oracle’s past comes back as the Calculator, Poison Ivy and Catwoman come after him, putting the Birds of Prey in the middle of the crossfire. 32 pg, $3.99 US

Batman Beyond #11 [08/23] Story by Dan Jurgens; art by Bernard Chang. “Rise of the Demon” finale. As past and present collide, Bruce Wayne witnesses the culmination of his legacy, and the Demon is revealed not to be Ra’s al Ghul. 32 pg, $3.99 US

Batwoman #6 [07/21] Story by Marguerite Bennett and James Tynion IV; art by Eddy Barrows. “Open Fire” part one. Taking place in the future hinted in the Rebirth issue, this arc will follow Kate as Commander Kane, the leader of the Colony, as she declares war against Gotham City. 32 pg, $3.99 US

Harley Quinn #25-26 [08/02-16] Story by Amanda Conner and Jimmy Palmiotti; art by Chad Hardin and John Timms. “Birthday” and “Mean Streets!”. Issue #25 will be an oversize anniversary issue as Harley’s entire cast of crazy characters comes together to celebrate the birthday of cyborg senior citizen Sy Borgman. In issue #26, Harley will be hammering some sente into New York’s mayor as he tips the city into corruption. Backup stories by Paul Dini and Jimmy Palmiotti; art by Bret Blevins and J. Bone. “Harley loves Joker” parts nine and ten. The Jokers Gang finds themselves in debt after building their new hideout, and in part ten The Joker sets himself into a personal vendetta against a thief who’s been stealing all of his prime jobs. #25 40 pg, $3,99 US; #26 32 pg, $2.99 US.

Mother Panic #10 [08/23] Story by Jody Houser; art by Shawn Crystal. Backup story by Jim Krueger; art by Phil Hester. Violet Paige hits the Gotham City party scene to dig up more clues for the people behind Gather House. What she finds is a figure from her past who she thought was long dead. Meanwhile, Violet’s allies discover something disturbing about her mother. 32 pg, $3.99 US

Nightwing #26-27 [08/02-16] Story by Tim Seeley; art by Javier Fernandez. “Spyral” parts one and two. Spyral comes back into Nightwing’s life as Huntress (Helena Bertinelli) encounters him right after one of his closest allies gets killed. On issue #27, Tiger, the current leader of Spyral and previous partner of Dick Grayson, ambushes both Nightwing and Huntress. 32 pg, $2.99 US

Nightwing: The New Order #1 [08/23] Story by Kyle Higgins; art by Trevor McCarthy. Set in an alternate future, Dick Grayson, Nightwing, is the leader of a government task force called the Crusaders who are charged with hunting the remaining Supers as superpowers are outlawed. As the government sets sight on his own family, the former Boy Wonder must turn against the very system he helped create, with help from the very people he’s been hunting for years—the last metahumans of the DC Universe. 32 pg, $3.99 US.

Red Hood and the Outlaws Annual #1 [08/09] Story by Scott Lobdell; art by Tyler Kirkham. “Bothers in Arms”. Nightwing is invited to help the Outlaws infiltrate a traveling circus tied to criminal activity. 48 pg, $4.99 US

Justice League #26-27 [08/02-16] Story by Bryan Hitch; art by Fernando Pasarin and Oclair Albert. “Legacy” parts one and two. The sons and daughters of the Justice League come back in time to avert their future from happening. Their reality is taken by a despot known as Sovereign and they believe that the solution to change their future is to kill one of the members of the League.  32 pg, $2.99 US

Justice League of America #10-11 [08/09-23] Story by Steve Orlando; art by Ivan Reis. “Crisis in the Microverse” parts one and two. One of the mysteries from DC: Rebirth is brought back as the JLA goes into the Microverse to rescue Ray Palmer, The Atom. 32 pg, $2.99 US

Suicide Squad #23-24 [08/09-23] Story by Rob Williams; art by Agustin Padilla. “Kill your darlings” parts three and four. Amanda orders Task Force X to take down the Justice League of America as she wages war against metahumans all around the world. 32 pg, $2.99 US

Titans #14 [08/09] Story by Dan Abnett; art by Brett Booth and Norm Rapmund. “Things Fall Apart”. Nightwing reveals his suspicions on who is the traitor amongst them. Meanwhile, Manhattan gets attacked by the Trident. 32 pg, $3.99 US

Trinity #12 [08/16] Story by Rob Williams, art by Clay Mann. “Dark Destiny” part one. Superman, Batman and Wonder Woman must turn to the mystic trinity of Dead Man, Zatanna and John Constantine when Red Hood, Artemis and Bizarro are sacrificed into the depths of the Pandora Pits by Circe and Ra’s al Ghul. 32 pg, $3.99 US

Injustice 2 #7-8 [08/02 – 16] Story by Tom Taylor; art by Bruno Redondo and Juan Albarran. The heroes come together to mourn a fallen comrade. Later, Batman is confronted by Blue Beetle, and Black Canary is visited by someone from her past. Ra’s al Ghul presents his ultimatum and Batman reveals the location of al Ghul’s secret lair. The Dark Knight is reeling from the return of an old friend. And then he’s off to recruit perhaps the most powerful man on the planet who isn’t Superman. 32 pg, $2.99 US

Batman will be showing up in both Blue Beetle #12 [08/23] as he drops by El Paso to lecture Jayme Reyes and Green Arrow #29 [08/16], in which Oliver will be dropping by Gotham while investigating a human trafficking case.