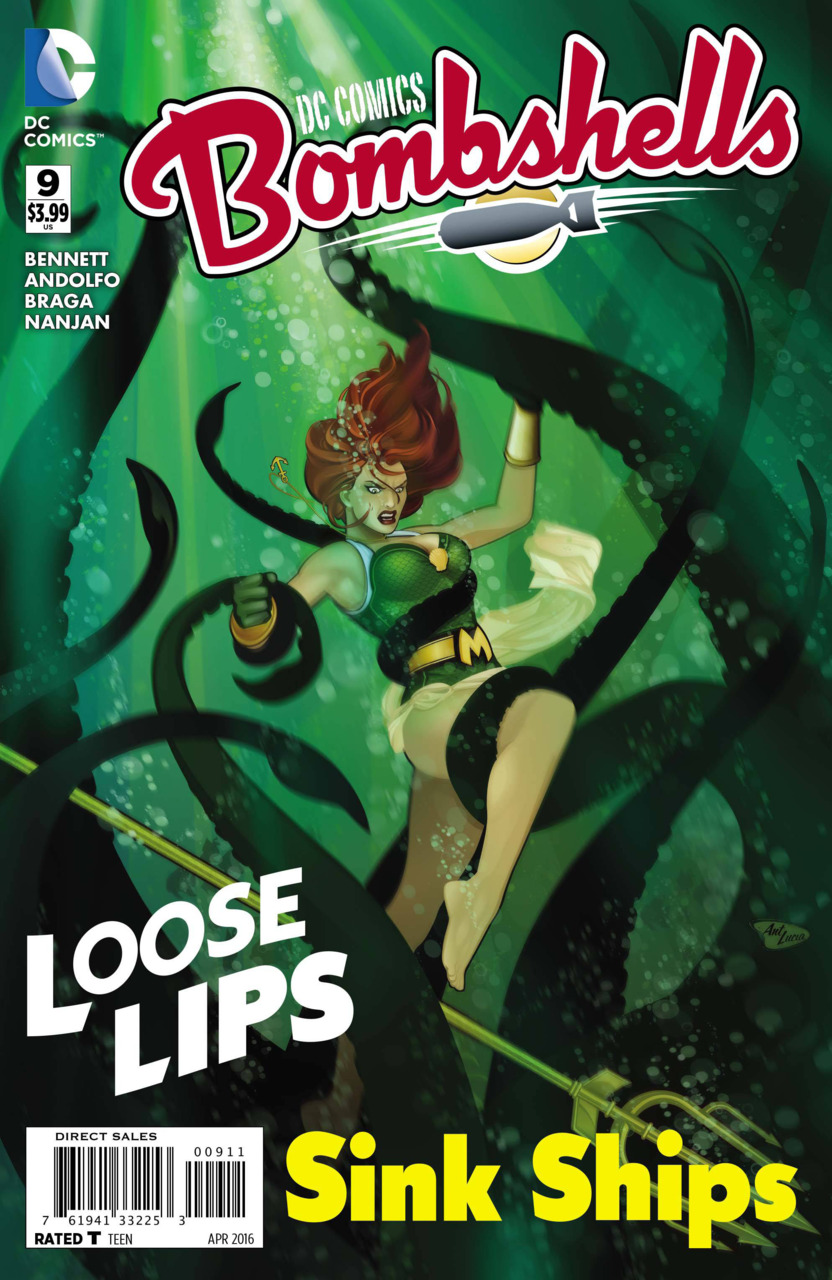 DC Comics Bombshells #9 collects the chapters #25-27 of the digital-first series based on the popular DC Collectibles Bombshells statues. The ninth issue continues the ‘Allies and Enemies’ storyline. The story is written by Marguerite Bennett, and all three parts vary in artists.

Part 1: Artist: Mirka Andolfo; Colorist: J. Nanjan; Bottom of the Thames, London, 1940-Aquaman and Supergirl quickly realize that the sea monster is actually a giant octopus, and it is being controlled by the King of Atlantis, Nereus. Mera’s brother in law and once betrothed, Nereus tries to convince Mera to join his crusade to rid the world of those that do not dwell in the sea. Nereus has also joined forces with the Tenebrae. Mera and Kara fight the creatures that Nereus has control of and have a difficult time of it. Mera wants to protect the sailors from the sea mines that surround the ship, and in the midst of the fight we discover that she was kicked out of Atlantis, rather than leaving on her own accord in order to go adventuring. Elsewhere, Kortni knows that her sister is in trouble and attempts to go help her until her birth father (Charles Whitmore) and Edward Nygma chloroform her and lock her in her room; for her protection, of course. While locked away, Kortni thinks about the differences between her and Kara, but quickly realizes that everything that Kara has done has been for Kortni, because of her devotion to her. Even though she is a girl, she will show what a girl can do.

Part 2: Artist: Lara Braga; Colorist: J. Nanjan; London, Peloponnese, Greece, 1940-Paula von Gunther, The Baroness, offers safety to Diana and her people if she will join the Baroness. She explains that she is under the control of no man, least of all Tenebrus, and she also believes in peace through submission, like the Amazons. As several fights rage throughout the story, we also learn the history of the Tenebrae, children of the King Beneath the Black, spirits that need a false life. The Baroness touts that the Reich will control the worlds above and below. Wonder Woman continues to fight, but now she is stuck between two armies and Baroness is the only path to salvation. Part 3: Artist: Mirka Andolfo; Colorist: J. Nanjan; London, Various Locations, 1940-The monster at the bottom of the Thames is defeated but Mera is knocked out. When she comes to she realizes that she has lost a part of herself since she killed a titan of the Tenebrae, Nereus’ squid.

Elsewhere, Courtney escapes her father to another building but is confronted by Edward Nygma holding her staff. He explains that her father hired him to disassemble inventions from around the world, understand how they work, put them back together and then Whitmore patents them. It was Nygma who built the mines in the sea, and now he wants to take Supergirl apart and see what makes her tick. When he tries to use Courtney’s staff, it backfires and Courtney grabs it and becomes Stargirl once more. She leaves Nygma with her father and flies back to the HMS Winston, where she meets up with Mera and Kara, and reverts back to Kortni.

Well, who didn’t see that coming? It was clear from the start that there was something strange going on with Charles Whitmore and his minion Edward Nygma. I will confess that I thought Charles probably had something to do with the Axis, but it turns out he was just over-protective. While I can certainly see the argument that Charles is making about protecting his daughter, I thought it did come along a little too quickly, especially since he had been out of his daughter’s life since she was born and there is no moment for them to get to know each other before he basically kidnaps her. This seems a little extreme, unless we are supposed to see him as sinister, though I do not believe that is the case. The characterization of Nygma seems to hit upon the major points that all Riddler fans would recognize, but I do wonder why he was working for someone rather than working for himself. There were moments of ‘If you’re so smart, why aren’t you rich’ playing through my mind as he monologues about his relationship with Whitmore. His desire to pull machines (and possibly people) apart and study them is reminiscent of Sylar from ‘Heroes.’ So which Riddler is this? His characterization continues to make me believe that current writers don’t know how to properly handle Riddler, and they misunderstand him.

The Kara/Kortni stories and history continue to be a highlight. The history with Kara and Kortni in Kortni’s perspective was perhaps the best part of the story, again showcasing the relationship as well as showing fears and differences between the two sisters. The art that goes along with it continues to be a treat, and the father’s speech about defining oneself showcased some strong writing and showed us how the girls became who they are.

Finding out about Mera’s history, albeit only a little bit, adds depth to her character and makes her a more sympathetic character than when she was just running around without a care in the world. The fact that she has ‘lost a part of herself’ after killing the giant squid makes me intrigued and interested to see where her story will go next. Can she go home again?

Finally, we see a story that fits Wonder Woman and gives her a fight that she deserves. She is challenged by the Baroness and it is a fight that really showcases the character we know and love. After this part, it is clear that the Baroness was a wonderful choice for a villain here. I especially enjoyed the shared narration between Diana and Baroness regarding the Tenebrae, illustrating that they have shared experiences. And how glad I am that Steve Trevor is pulling his weight and actually doing something instead of just playing the victim. It’s about time!