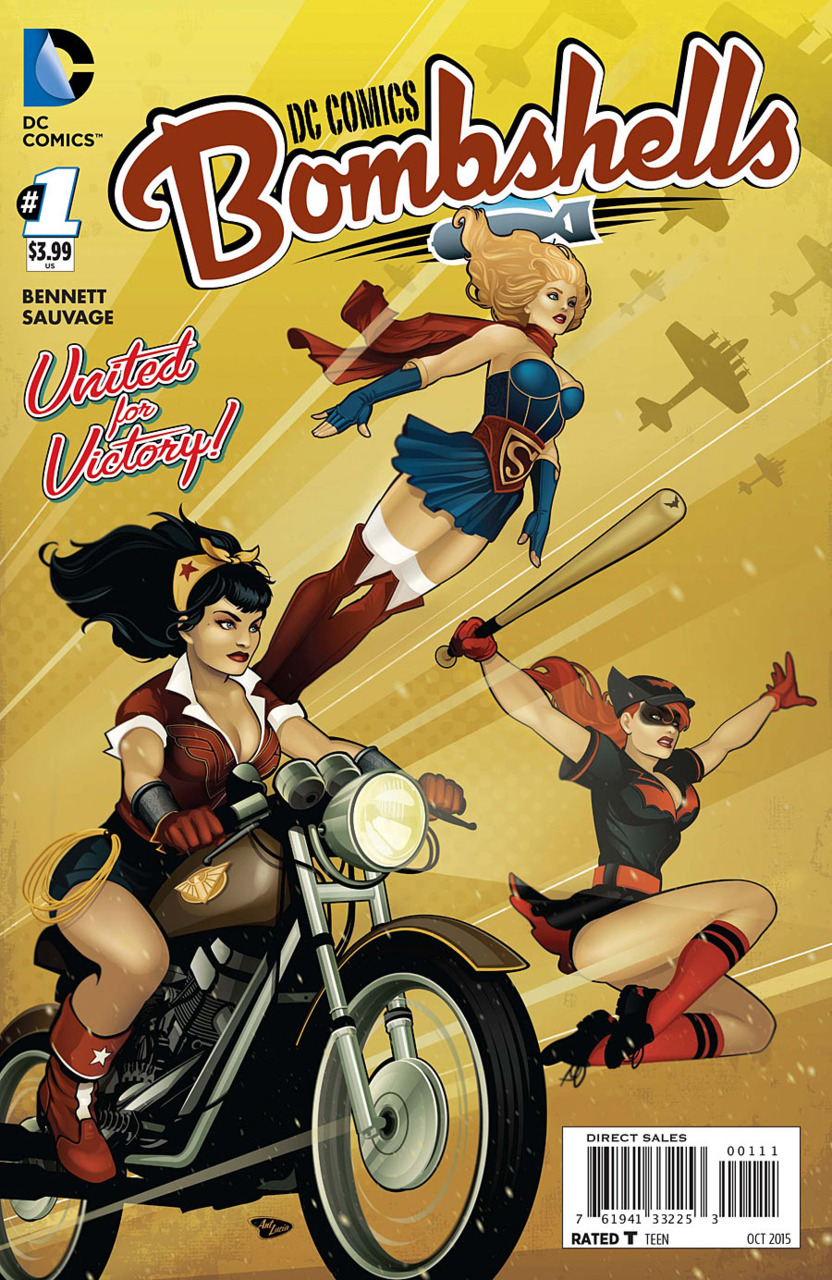 DC Comics Bombshells #1 collects the first three parts of the digital-first series based on the popular DC Collectibles Bombshells statues.

The first story is entitled ‘Enlisted,’ and if you notice, it was originally a three-parter but turned into a NEIN-parter (haha, get it? I mean ‘nine’ but we’re talking WWII here, so ‘nein?’ heh!) The story is written by Marguerite Bennet and drawn, inked, and colored by Marguerite Sauvage.

Part 1: Gotham City, 1940-We see the fateful last night of the Waynes, but it turns out differently when Batwoman saves the Wayne family from the mugger. We then see Batwoman during the day, as a player on the Gotham Knights all-female baseball team. The announcer is obnoxious, but more distracting is the group of robbers attempting to hold up some of the spectators. Batwoman makes short work of them with a baseball, a base, and a bat, while her teammates and even her opponent Bette help out. Batwoman leaves before Maggie Sawyer and the GCPD arrive with questions.

Later, in an apartment in Burnside, Kate and Maggie discuss their future in Gotham, and Kate, while adventuring is in her blood, wants more meaning in her life. They are rudely awakened in the morning by a plane landing on the roof and the pilot happens to be Commander Amanda Waller asking Kate and Maggie if they would like to help end the war.

Part 2: Miles off of the coast of Greece, 1940-Steve Trevor is flying a plane with a payload when his squadron is suddenly attacked. The Amazons are defending Themyscira, and all of the pilots eject but drown, wrapped up in their parachutes. All but Steve Trevor. The Amazons want to kill him, but Diana stays their hands. Steve questions why they would do this since he never fought them, and Diana explains that he never thought about the bullets and bombs that fall and miss their targets and end up killing people on Themyscira. This quiets Steve Trevor, and Diana explains that he will have to stand for the actions of his realm, but she wants to know about the ‘evil tyrant’ Steve spoke of first. Steve passes out and seems to hallucinate, hearing music which comes from the bottom of the sea. Part 3: Moscow, 1940-Kortni thinks back to the stories that her mother told her and her sister, and especially recalls looking for witches in the forest. At the dormitory for the daughters of the workers’ revolution, Kortni wakes Kara up in excitement because they get to fly today with the Night Witches, an all-female air squadron. On the streets, the girls are harassed by a soldier and Kara flicks him away…literally. At the airfield, Kara and Kortni discuss the differing merits of their parents and what they learned from them.

After months of training, Kara and Kortni finally get to fly with the rest of the new recruits, but something goes wrong with Kortni’s plane and Kara is forced to leap out of her own plane, fly over to Kortni, and set Kortni and her own plane down on the ground. Unfortunately, upon landing, they are branded ‘traitors’ by the Night Witches’ squadron leader.

While the story may take some historical liberties (the United States did not enter the war until after Pearl Harbor was bombed in 1941), overall the look and feel of the comic reflects what was going on around the world during World War II. The entire story may be based on female characters, but the storytelling is diverse and interesting. Each of the parts deal with different cultural, social, and historical issues: women taking over the workforce and ultimately the place of men for the interim of WWII; the not-oft-talked about collateral damage of war; family and responsibility. All of these themes are crafted so well here, with lead characters who best exemplify the story that is being told. My favorite setting by far is Batwoman’s story, primarily because ‘A League of Their Own’ is one of my favorite films. Something else that is great about these stories is that you are not just reading three individual stories with three individual, autonomous, female leads. Instead, we are given female leads with one or more personal relationships that add depth to the lead and the story as a whole. I was most pleased about seeing Kate and Maggie, as that is a relationship that has been sorely missed in the DCU. Diana’s relationship with her Amazonian sisters was perhaps the least developed (though I expect this may change), but Kara and Kortni’s relationship made up for that. What a wonderful (and potentially tragic) thing it is to have family by your side while you fight for your nation.

I would almost consider this series an Elseworlds story, since it contains elements of the DCU that we are familiar with but turns them on their heads. Bennet does a great job creating a world that is both familiar and strange. I also love the nods to other, perhaps lesser known characters like Bette Kane and…is Kortni really Courtney Whitmore, aka Stargirl? Plus, Burnside seems to be permeating the DCU!

Something that I can not say enough about is the art. Gorgeous! Sauvage does a wonderful job transforming these statues into living, breathing characters, and every detail of every panel comes out so well! And let’s be honest, these women really are bombshells! The only con I have is that, while I love that each part sets up a different character and story, all the stories seem disjointed and so distinct that I am not sure (at this time) how they are all going to come together. But hey, when Amanda Waller shows up, all bets are off! If you are looking for a story with strong female leads taking place during an important and fascinating time in history, then I suggest you pick up DC Comics Bombshells!