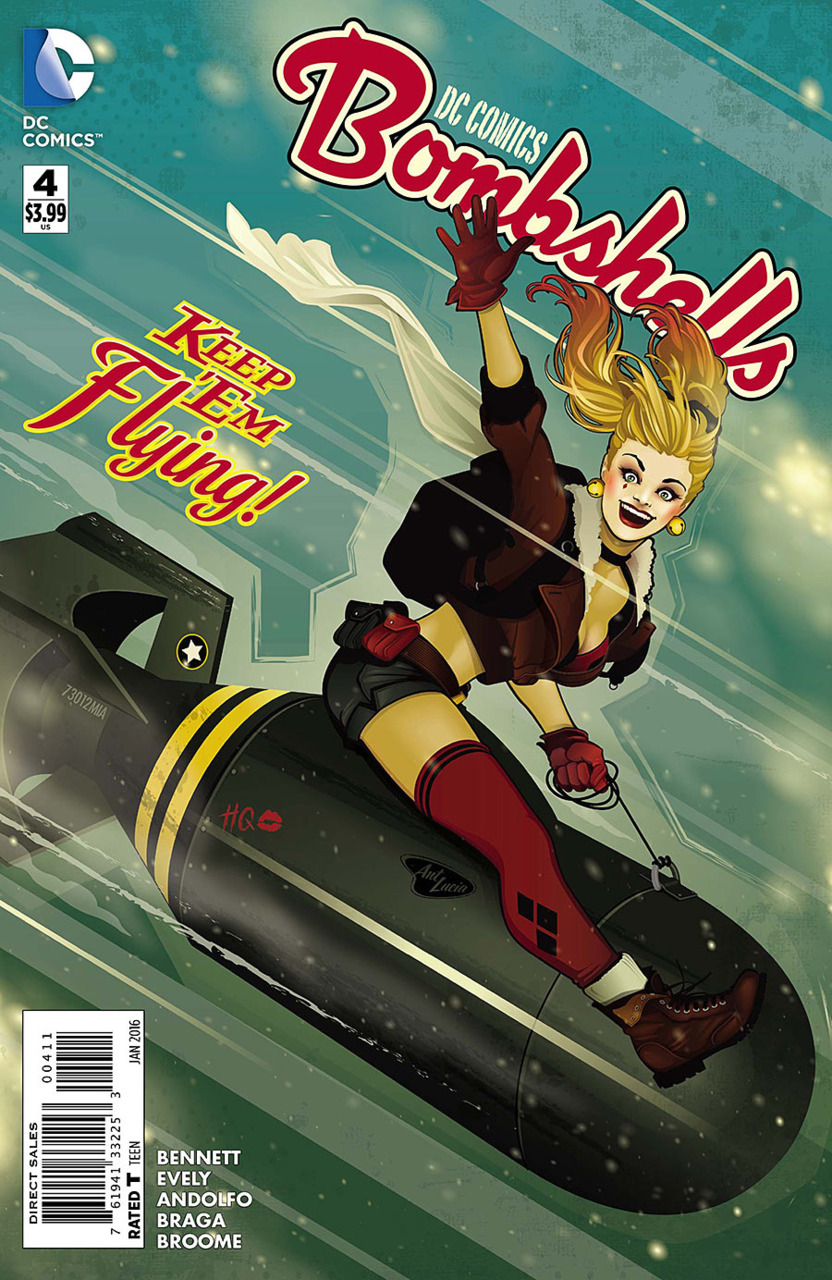 DC Comics Bombshells #4 collects the next three parts of the digital-first series based on the popular DC Collectibles Bombshells statues.

The fourth issue begins the ‘Combat’ storyline. The story is written by Marguerite Bennet, but the artist credits change for each part this issue. This will be a trend throughout the rest of the Bombshells run.

Part 1 (Art by Bilquis Evely and Colors by Wendy Broome): Russia, 1940-Supergirl (Kara Starikov) and Stargirl (Kortni Duginovna) are the newest, and most powerful, objects of propaganda for the Motherland. They play along in hopes of seeing their parents once more, and they are given orders to be lethal in all that they do, but Supergirl especially must be careful in how she uses his powers. General Arkayn gives them orders to destroy an enemy camp, but from a distance Supergirl hears the voices of those inside the camp and prevents the Night Witches’ planes from delivering their payload. The Night Witches return to base, probably to report the girls, while Kara and Kortni go to investigate the camp and discover it is only set up to look like a Nazi camp but actually is housing those who have been arrested for disobedience, sedition, and political unrest, all sent by General Anton Arkayn. Part 2 (Art by Mirka Andolfo and Colors by Wendy Broome): London, 1940-At an Arkham Ward for the criminally insane, two nurses talk glowingly about Dr. Quinzel, a doctor from the US who may have a shady past. They invite Dr. Quinzel to a Christmas party, but she passes, wishing to stay with her patients. She visits Dr. Shondra Kinsolving, who was Quinzel’s colleague in America but was forced by her brother to kill her father. Kinsolving has disturbing dreams, dreams about the death of the world and a London overrun with monsters. She also dreams of a man sounding suspiciously like Joker, calling out to Quinzel. This sets Quinzel off, and while transforming to Harley Quinn, she is attacked by a patient. She takes him out and frees Kinsolving, then leaves and makes her way to a bar where she causes all sorts of chaos before finding the pilot Hal Jordan. Jordan takes her to Whitemore Airfield, and she distracts him with bad magic tricks before knocking him out and stealing his plane.

Part 3 (Art by Laura Braga and Colors by Wendy Broome): (I assume) Greece, 1940-Wonder Woman returns from her visit with Amanda Waller with a new costume, designed in part by Steve Trevor. As she speaks at the Allied camp with Steve Trevor, they speak of the other soldiers’ opinions of Steve, what people think who have not experienced war, and the stress of seeing unspeakable things (like a giant monster in the sea, perhaps?). We find out that Steve was actually not a pilot, but an intelligence officer. Before more is explained, they are interrupted by the US soldiers getting ready to execute the Nazi soldiers that were captured. Wonder Woman prevents this from happening, explaining that it is butchery and they should face trial. Wonder Woman stays firm in this, but General Lane decides to show her the price of insurrection and desertion of duty in the field…execution. Overall, this issue is much stronger than the past couple issues. Perhaps one of the reasons why it is stronger is because Joker’s Daughter isn’t present in the issue, but I would also argue that because it tackles relevant issues and has good art throughout it is more pleasing to read. One of these issues is ethics during war, such as how prisoners are treated, and what soldiers should and should not be allowed to do. We see this in Wonder Woman’s story with the treatment of the Nazi soldiers, and besides seeing such an issue being brought up, it was also interesting to see that the Americans were getting the negative portrayal here. Also in Wonder Woman’s story we see the idea of PTSD brought up but not explored, and a deeper conversation regarding the judgment of soldiers on the outside world from regular citizens. Readers also see the use of propaganda during war time, and how it was used or misused, depending upon the situation. This series continues to gain its strength from mixing fantasy with historical facts and ideals, and now it dabbles with more current issues and debates.

I was happy to see Kara and Kortni again, since it seems to have been some time from when we last saw them being forced to sign up for the Russian army. This part is another way of showing the stresses placed upon soldiers who must follow orders despite what their personal belief system may be. Bennet also introduces us to a new character in Bombshell-form, Harley Quinn. It was only a matter of time, I suppose, since she is such a fan favorite. Bennet seems to have made her a Jekyll and Hyde-like character, with Joker being the mysterious formula that would transform Jekyll into Hyde. She seems completely normal until Kinsolving mentions her dreams of a toothy guy who grins. Where does Harley’s transformation comes from? And what about the sudden appearance of the makeup? I also wonder what the point is of Harley trying to gather a bunch of girls together. Is she trying to create her own London Sirens? Is she just trying to have fun? If so, what is she doing with the plane? My first thought regarding this last one is that she is trying to return to Joker, since she believes he is calling for her. In any case, while fun, this particular story is the wackiest…fully representative of Harley Quinn.

Finally, it was fun to see Diana in her new Bombshell-garb, but I am disappointed that her conversation with Waller happened in off-panel land. It seems like it would be an important conversation to show, as well as it being a fun way to see Diana’s new outfit make its appearance. In this particular story, I also question Diana’s newfound desire to uphold and keep the laws of a nation that she has only just learned of. It seems fitting that she wants justice and trials for those who have been conquered, but does this desire only come from the short education that she received from Steve Trevor. I would say this particular part had the most gaps, though was the deepest in regards to the themes and issues I described earlier.

Overall, I am pleased with the way this story turned out, and I am hoping that it keeps on this track of fun and meaningful storytelling.