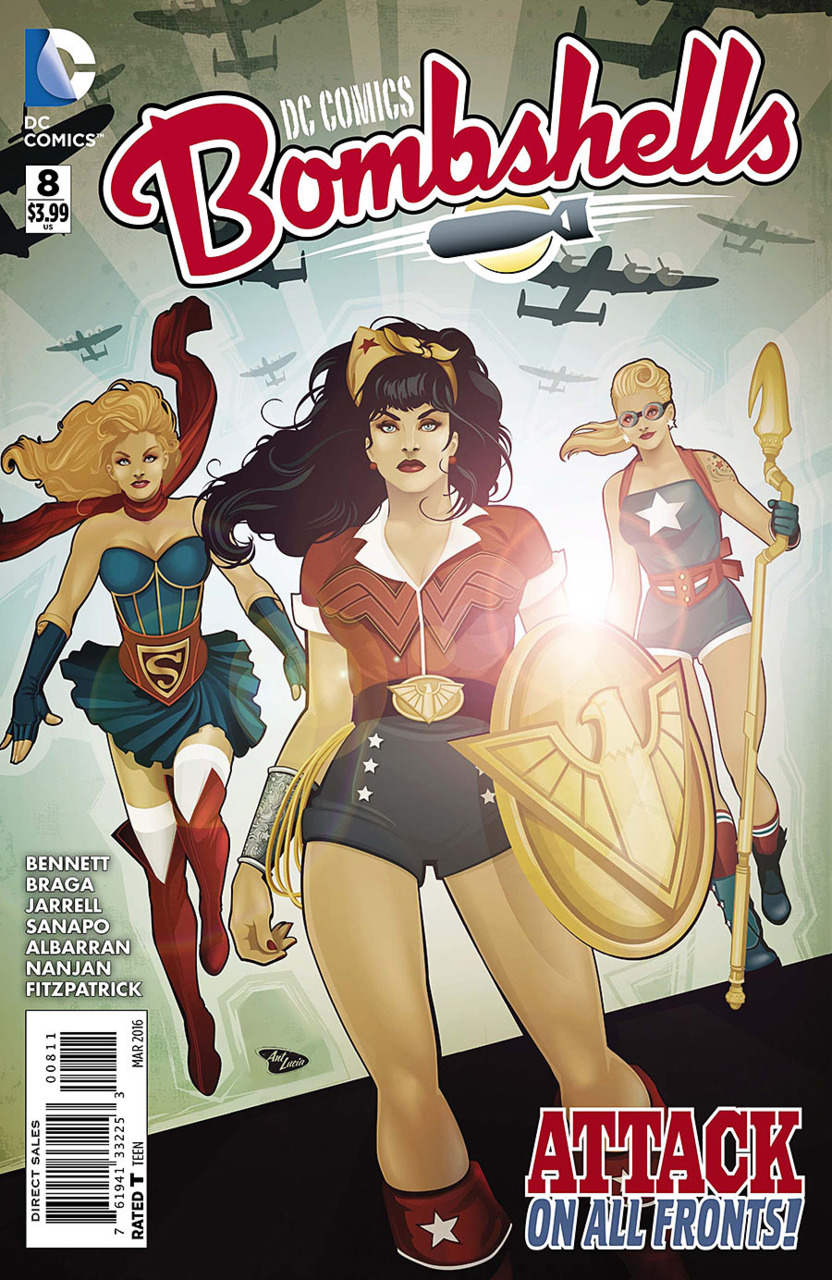 DC Comics Bombshells #8 collects the parts 22-24 of the digital-first series based on the popular DC Collectibles Bombshells statues.

The eighth issue continues the ‘Allies’ storyline. The story is written by Marguerite Bennett, and all three parts vary in artists.

Part 1: Artist: Laura Braga; Colorist: J. Nanjan; Peloponnese, Greece, 1940-Inside a Nazi camp, a wounded POW on the edge of death is pushed there finally by Nazi soldiers who are annoyed by his weeping. He later turns into a Tenebrae, to the shock of the Nazi soldiers. Elsewhere, Wonder Woman and Steve Trevor are recovering from the landmine explosion, Trevor seems to have no hope, and Diana tries to give him some hope. She tells him of the enormous cost of the war, but how she helped to bury some innocent villagers, and that all things come back. This is taken literally as a group of Tenebrae attack Diana and Steve, under the leadership of Baroness Paula Von Gunther.

Part 2: Artist: Sandy Jarrell; Colorist: Kelly Fitzpatrick; London, The HMS Winston, 1940-Mera and Kortni put on a show for the sailors as Kara looks on disapprovingly, saying it is just propaganda. Later, Kortni and Kara’s mother relates the story of Kortni’s biological father. In 1923 in the new USSR, she was a young lady and companion to a military officer’s wife when she fell in love with a young English Lord. He was driven away by the military officer and his wife, and she became pregnant. She was to go to a desolate village and was helped by the spirits in the forest. Later, she met the father the girls both know, and they fell in love as they believed the same things and were both outcasts.

After their mother reveals the name of Kortni’s father (Samuel Whitmore) Kara leaves, feeling like she has let both of them down, not being of the same blood and losing their father, but Kortni comforts her and tells her that they are sisters no matter what.

Part 3: Penciler: Maria-Laura Sanapo; Inker: Juan Albarran; Colorist: Kelly Fitzpatrick; London, The HMS Winston, 1940-Mera is told by the Captain that some strange music has been picked up by the ship’s sonar. Aquawoman goes into the water to discover with horror that there are sea mines underneath the HMS Winston, and that’s not all! She is later attacked by Tenebrae from the ship she destroyed earlier. Supergirl shows up to help, but they are both shocked to discover a giant sea monster that seems to know Mera. Elsewhere in London, Kortni goes to meet her biological father, who happens to make war machines. He offers to protect her, but she replies that she doesn’t wish to give up fighting the good fight.

A new introduction to the book, as well as to me, was Paula von Gunther. Created in 1942 by William Moulton Marston, von Gunther was an adversary for Wonder Woman, and would later become the Wonder Woman’s first recurring enemy. In her earliest appearances she was a Nazi spy and saboteur, but would also become a reformed ally (with occasional lapses) of Wonder Woman’s. While there are certainly more well-known enemies of Wonder Woman that would be easily recognized, von Gunther is a good pick since she has connections already with the Nazi party.

Despite the appearance of an important villain, Wonder Woman’s story is the weakest in this issue, perhaps because of its slow pace. It seems like Steve and Diana have been traveling for a while now with no hope of a respite. Given what we have seen thus far, the best formula for a well-rounded story is to include more than one Bombshell, thus ensuring good interactions and pacing. As it stands now, it seems like Diana and Steve’s story is just marking time until something big happens to push it forward. Perhaps von Gunther is just the catalyst, but Wonder Woman needs to start interacting with more Bombshells, because Steve is a poor shadow of a sidekick who only adds negative commentary. The theme of the Supergirl-Stargirl stories always seems to be family oriented, but I was surprised to see this particular departure from the story. While it was interesting to see the true story of Kortni’s origins – and we once again get to see the imaginative and beautiful art that we saw previously during the backstory of Kara – the introduction and appearance of Kortni’s father seems unnecessary and I do not really see the point of it besides the potential of yet another side story. Given the company that Samuel Whitmore keeps (Edward Nygma), and the mention of making war machines, I’m not too sure that Whitmore is such a positive presence in Kortni’s life.

The relationship between Kortni and Kara is the most compelling part of this particular issue, and it felt realistic seeing that it is not without its struggles. They are having opposite experiences, with Kortni finding her biological father and Kara feeling that she is losing her family and she is at the root of the problems they are all encountering. I like that Kortni and Kara are really treated as two different characters with different personalities: Kortni is more optimistic and youthful, while Kara is mature and realistic. They work well together because they are both able to play off one another without there being tension.

Finally we get to see the re-occurrence of the odd sea creature seen back in issue one! Hopefully it will not be another several issues before we see the connection between the sea creature and Mera. As new elements are introduced and others are tied together, I can’t help but wonder how this story will conclude.