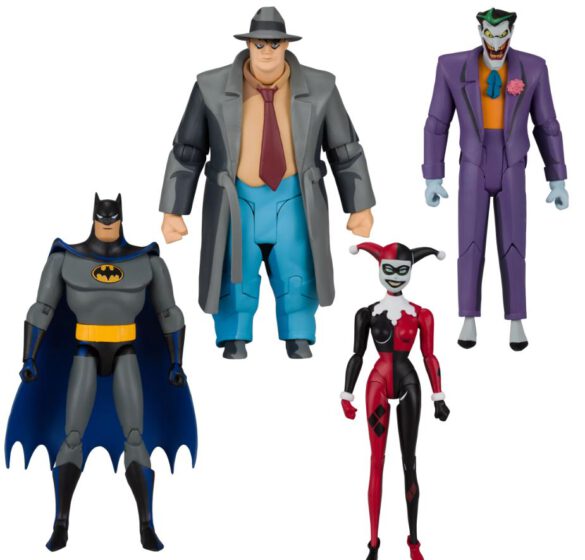 McFarlane Toys has announced a new release from DC Direct featuring a 4-pack of figures from Batman: The Animated Series. The set includes Batman, Joker, Harley Quinn, and Harvey Bullock. Each figure measures about six inches tall and includes additional hands and accessories. The set is priced right around $100 and is expected to ship in November 2022. You can preorder the set exclusively from Walmart now.

Batman: When two shots rang out, Bruce Wayne’s life changed forever. He pledged himself to justice and he has upheld that oath for years. Wearing many names—the Dark Knight, the World’s Greatest Detective, the Caped Crusader—he has battled tragic foes like The Joker, The Penguin, Mr. Freeze, and so many more. But deep inside, he knows that he shares something with them that most of humanity wouldn’t understand—a commitment to the fight.

Harvey Bullock: A good cop worn down by the corruption of Gotham, Bullock may appear slovenly or even oafish, but don’t be fooled. He’s a smart man, dedicated to solving crimes. He just knows that in this city, sometimes to solve a crime you need to cross the line. Whether it’s taking a bribe, roughing up a perp or forging ties with organized crime, Bullock is more than willing to bend the rules to keep the people of Gotham safe and put the truly dangerous criminals behind bars.

The Joker: No name strikes terror into the hearts of Gotham’s citizens quite like the Joker. In a city overrun with larger-than-life criminals, the always-laughing villain stands alone. A complete psychopath with no moral compass whatsoever, the Joker, whose real name and identity remain completely unknown, is characterized by his chalk-white skin, green hair and a permanent rictus grin stretched across his face. But there isn’t a single thing funny about this particular clown, who only finds humor in the suffering of others.

Harley Quinn: Sometimes love can make people do crazy things. Other times? It drives them completely insane. Such is the case with Harley Quinn, formerly Dr. Harleen Quinzel. A promising psychologist and intern at Arkham Asylum in Gotham City, Harleen was given the chance to get up close and personal with the Joker, an experience that wound up ending…badly. Harleen became obsessed with her subject, and after falling madly in love with the Clown Prince of Crime, she helped him escape the asylum. Her love for the Joker inspired Harleen to adopt a new identity, that of Harley Quinn, the Joker’s sidekick-slash-love interest—whether he wanted one or not.