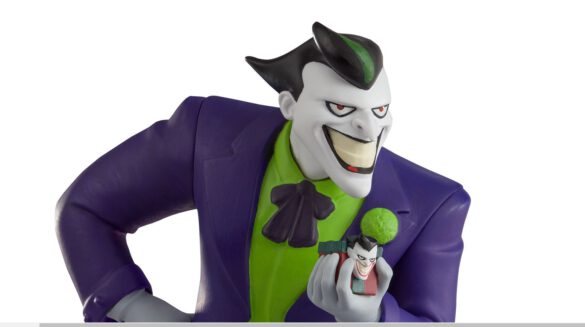 McFarlane Toys has revealed a new DC Direct statue as part of the Purple Craze line featuring Joker, with the new statue featuring the art of Bruce Timm. The one-tenth-scale statue measures over seven inches tall and features Joker holding a small gift box. It is priced at $124.99 and is expected to ship in February 2023. You can preorder the statue at Entertainment Earth or Amazon now.

Some things just hold that place of nostalgia, and one of those things is Bruce Timm’s rendition of The Joker in Batman the Animated Series. With his iconic voice and nefarious deeds, this Joker introduced a whole generation to the Clown Prince of Crime.

Standing 7.5in tall, this statue depicts The Joker with his frightfully charming smile holding a special joker themed gift. A must-have for fans of this cult classic cartoon.