Review: Under The Moon: A Catwoman Tale 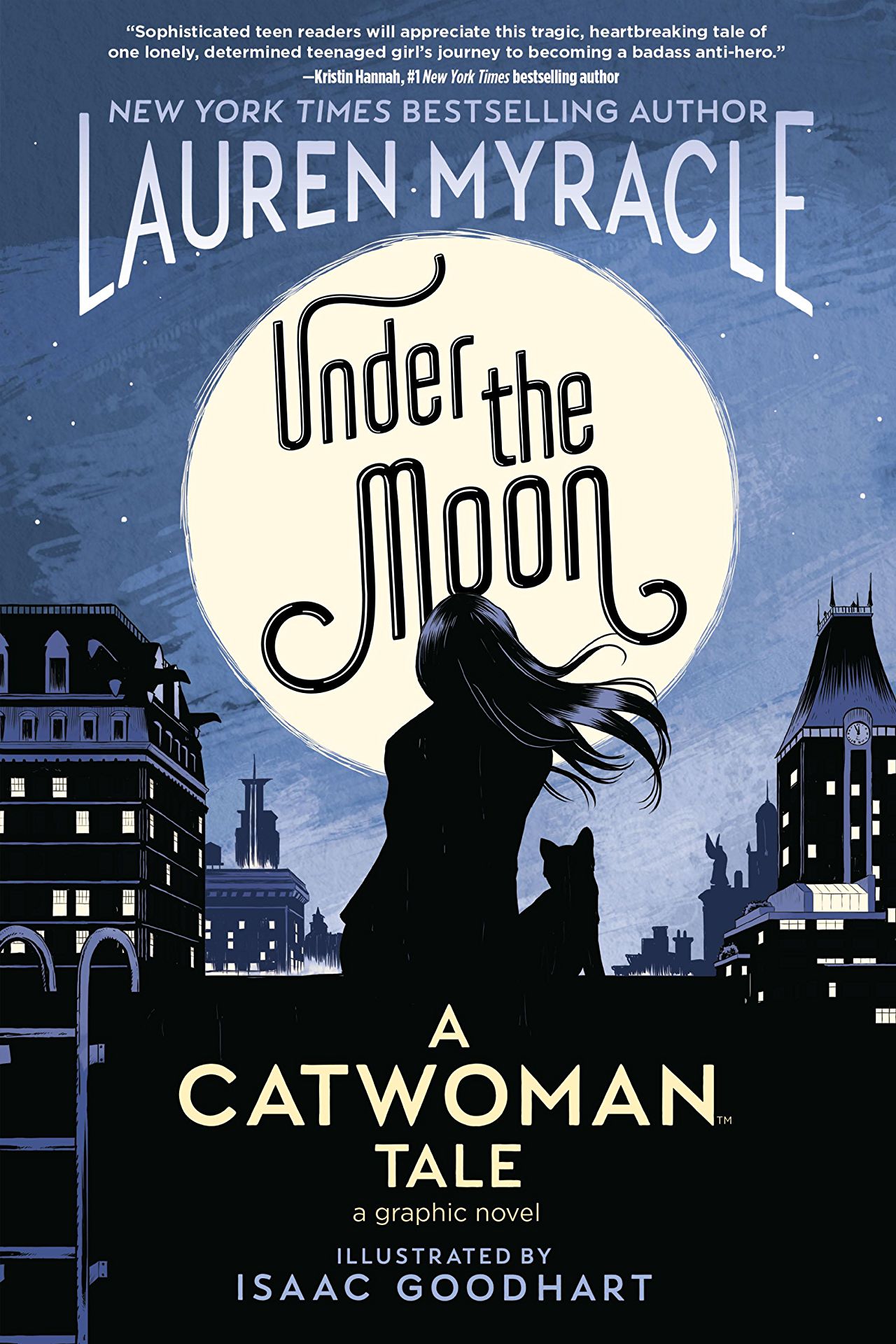 Overview: Teenage runaway Selina Kyle experiences a spiritual rebirth when she leaves behind her abusive household and becomes a street urchin.

Synopsis (spoilers ahead): Selina Kyle is a teenage girl with an unhappy home life. Her mother’s current boyfriend abuses both her mom and Selina, and her only release is her time locked in the closet. Frustrated that her mother won’t stand up for her, Selina finally runs away from home after her stepfather kills her kitten. Selina adjusts to life on the streets and becomes determined to survive without any outside assistance. She eventually joins up with a small group of other street urchins and befriends a younger runaway named Briar Rose. Selina becomes determined to help Briar get the happy ending she wasn’t able to get for herself.

Analysis: I’ve been looking forward to this book’s publication for almost a year. Last summer at San Diego Comic-Con, DC gave out samplers containing previews of their Zoom and Ink books, and this title was included. Out of all the previews within, this was the book that captured my attention the most. I was engrossed in the story and disappointed when I realized I had reached the end of the preview.

Now that the book is here, I am pleased to say that it lived up to the expectations I’ve been building since that preview. I read this comic in one sitting with my attention captured the entire time. Lauren Myracle finds a great voice for Selina and instantly gets the readers invested in her journey. Like Selina, we want her stepdad to get his just deserts and we want her mother to stand up for her. Myracle is able to break the reader’s hearts as she gives a nuanced take on Selina’s tragic family life. Real life doesn’t always have happy endings, and neither did this. We didn’t get to see Selina reconcile with her mother or beat up her stepdad, but that’s what makes this story more realistic. If this was an animated movie or live-action drama, Selina’s home life would get some closure, but that’s not the case here.

Instead, we’re shown how her home life defined her and drove her to take charge and become a survivor. Selina is so determined to never be put in a situation like this again that she’d rather sleep on the streets than accept Bruce’s offer of a warm bed in Wayne Manor. While that may seem stubborn and pig-headed, Myracle presents Selina’s pride with enough nuance that we could understand it, even if we don’t agree with her choices. After being let down by her mother, Selina never wants to give anyone control over her instead. When a kind stranger learns that Selina has been sleeping in their shed, they offer the homeless orphan assistance. Selina rebuffs the offer and never returns to the shed again. For better or worse, Selina is doing it her own way.

Curiously, the book switches gears and focuses on Selina’s relationship with another street urchin named Briar Rose. That switch seemed odd for me, and I wonder if it was meant to parallel the nurturing relationship Selina had with the kitten she had failed to save from her stepdad. The story ends with Selina “saving” Briar, giving her earlier failure full closure, but the choice still felt odd.

Isaac Goodhart’s illustrations enhance the reading experience a thousandfold. The scene of Selina communing with the cat spirits in the stars was one of the best sequences in the book, and that’s mostly owed to the art. Goodhart’s lack of colors always works for the mood of the story. After all, Selina lives in a dark world of no color and joy, so why shouldn’t the book be the same way? Goodhart’s art is visually appealing and helps pull the reader into an enjoyable tale.

I wasn’t thrilled with Selina harming herself. Catwoman is a character who has been around since 1940, and I think there are some things the legendary DC characters should never do. It would be different if this was Holly Robinson or Kay Challis, but because it’s Selina I wish they hadn’t gone that route. However, the book doesn’t glamorize what she’s doing. One of the strongest scenes for me was when Briar noticed Selina’s scars and a horrified Selina was afraid the urchin might try to copy her. Selina told Briar to never cut herself and expressed some remorse. The end of the book also contains resources for anyone who is being abused, having suicidal thoughts or harming themselves. That was a very important choice that I’m glad they made. While I’m not thrilled with the subject matter is included, the book utilized it well and made sure it was a cautionary tale.

Final Thoughts: A home run for DC Ink. “Catwoman: Under The Moon” is an addicting read that captures your emotions.