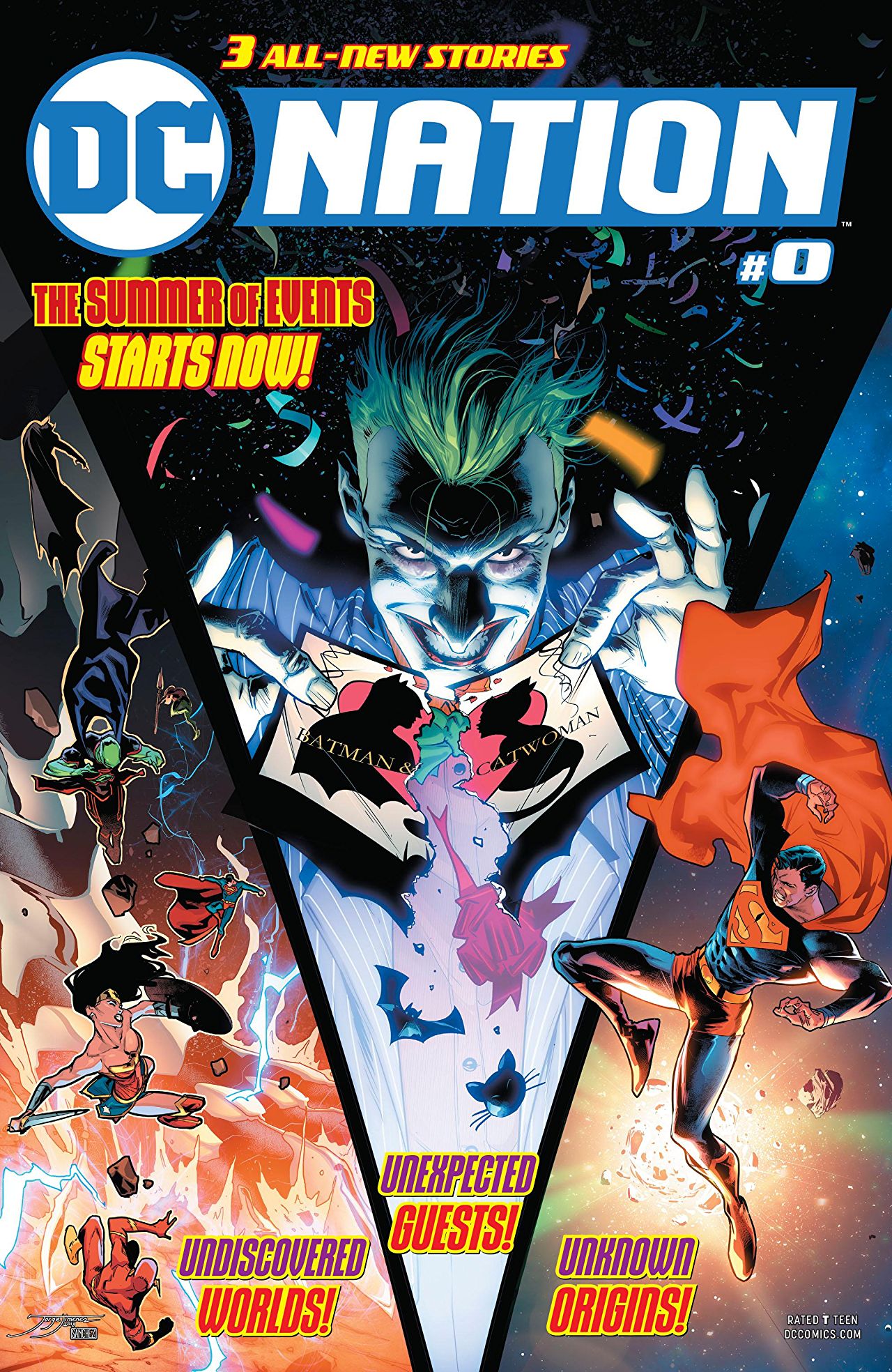 Editor’s Note: Due to the unique nature of this issue, we have summed up what has happened in each of the three stories, the main focus on being what we normally cover with Batman and Justice League.

Batman Preview Story: Joker, with a pistol in hand, tells Roger Martello that he has two questions for him. Joker first asks, “What is brown and sticky?” Roger is dumbfounded on how to respond. Joker responds that it is a stick (which makes sense). The second question he asks him is, “When does the mail arrive?” Fearfully, Roger stumbles over his words and asks for clarification. Joker tells him that he is interested in the mail because he is waiting for a very import invitation. Roger responds that it is probably coming soon.

Roger is more than willing to let Joker steal all of his possessions if he would just leave his house. Joker responds, “Roger, darling, listen, don’t worry about that. I kill people when I’m upset, and as long as my invitation comes…I promise I won’t be upset.”

Later. Joker explains that the piece of mail he is waiting for is a wedding invitation. He tells Roger that “he heard from a banana that Batman’s getting married. And, obviously, he’d want to share his big day with me.” Roger is confused about why Batman would send something to his residence. Joker replies, “He has to send it somewhere, and some time. And this is somewhere. This is sometime.”

Later. Roger grabs a gun and shoots at Joker; well, he pulled the trigger and the “bang” flag came out (classic Joker). With this failure, Roger exclaims that he is going to die. Joker reassures him that he is not going to die…well maybe.

Later. Joker asks Roger if he has heard the joke about the letter that didn’t have the stamp. He then quickly tells Roger that he would not have understood it anyway, so it does not matter.

Later. Roger sobs in his hands that he cannot stay sitting waiting on the mail with the Joker. He asks Joker to just kill him now, there is no need to drag it on any longer than need be. He tells Joker that Batman is not getting married. And if he was, why would Batman of all people invite himself and Joker anyway?

Later. The mailman drops the mail through the slot and they both see a stamped letter. Joker breaks the seal and reads the piece of mail as Roger overlooks. Roger asks if that is it: since he received that piece of mail, Joker would leave peacefully. Joker tells him that he is happy because he got the invitation and he is going to the “wedding of the year.” Unbeknownst to Roger, Joker pulled out his pistol and had it aimed at his face.

Joker walks away saying “and when I am happy, I kill people.” Joker dropped the “invitation” into a pool of Roger’s blood. The letter was from the Gotham City Department of Education stating that Mary Martello, Roger’s daughter, was late for school on May 23rd.

This story continues in Batman #48.

Man of Steel Preview Story: In the middle of the Daily Planet, Perry addresses his reporters and tells them to report the truth. He tells them that there will be no more editorials, headlines, commentaries, or “letters to the editor” about how the citizens of Metropolis should be afraid of Superman.

Perry asks Clark if he has a story that is front-page worthy. Clark rundowns the outline of his new story and Perry likes it. (Guess what, it deals with Superman. How odd?) With Lois taking a leave of absence, he offers Clark her office. Clark declines and says that no one could replace Lois. Perry agrees and then introduces a new hire to the team. With Lois gone, the Planet needs more high-level talent.

This story continues in Man of Steel #1.

Justice League: No Justice Preview Story: On the planet of Colu (Brainiac’s homeworld), Brainiac bots question Bruce on where the Justice League is. Bruce smirks and asks them “which one?”

At that moment, Team Entropy (including Lobo, Deathstroke, Lex Luthor, and Beast Boy) appears and sets Bruce free. He tells Clark, via the comms, that Team Entropy is at the cell block. Clark and the rest of Team Mystery (including Martian Manhunter, Starfire, Starro, and Sinestro) fight a giant brain. In his inner monologue, Clark rundowns the events as to why the Justice League is here.

Three days ago, Brainiac appeared to the League and pleaded for their help. At the end of Metal, the source wall was breached and four beings, the Omega Titans, emerged. These beings absorb whole galaxies for their energy. He states that the only way to beat them is to form new teams based on the four cosmic energies: entropy, mystery, wonder, and wisdom. The Titans were coming to Colu and if they cannot defeat these Titans on Colu, then Earth is doomed.

As Clark’s Team Mystery is at the Life Nursery, he asks about Diana’s team, Team Wonder, and their progress. She tells him that they (herself, Doctor Fate, Raven, Zatanna) are on their way to the mystic tree. She asks Cyborg for a progress report.

Cyborg, leader of Team Wisdom (including Atom, Robin, Flash, Harley Quinn), is at the core of Colu’s nervous system in order to hack it. Beast Boy asks Bruce why the heroes are fighting alongside the villains. Bruce tells him that although he is skeptical of the plan, it is necessary so that Earth may be safe.

Back on Earth, Oliver pleads for Kara to fly back down. With the League on the other side of the universe, Oliver and Kara are two of the “big guns” left to protect Earth. She tells him that Earth is safe and there is no need for him to worry. Oliver retorts that although the League is on the other side of the universe fighting for their survival, it does not mean that the Titans or other threats could not come. While telling him he is wrong, she sees the Titans looking down on Earth.

This story continues in Justice League: No Justice #1.

Final Thoughts: I know this review is very different than the usual format, but this issue is very unique.

I felt that the Joker in King’s story reminded me of an old school Joker, much like the one in Batman: The Animated Series. I like that King is writing his own Joker and not necessarily copying what Snyder did. Overall, I liked King’s story.

The Man of Steel series is Brian Michael Bendis’ first story in the DC universe. I am excited to see where he takes it.

Snyder’s No Justice continues the momentum that Metal had. He uses a vast and diverse cast of characters because the traditional Justice League cannot handle this threat by themselves. I have many questions about the Omega Titans and the breach of the Source Wall, but my biggest question is: what can the Justice League do, that Brainiac cannot?

The art in each of these three stories is amazing. I love how Clay Mann employed a Watchmen-esque grid layout for King’s story. It really enhanced the writing and made the story flow so well. The art in Bendis’ story, by Jose Luis Garcia-Lopez, is nice. My one criticism is that the faces are not drawn with much detail; they are pretty bland. The art for Snyder’s story, by Jorge Jimenez, is top-notch. Seriously, the art is incredible and I hope it continues in the No Justice series.

This teaser comic definitely achieved its goal. I cannot wait to read the rest of the issues in these story arcs.