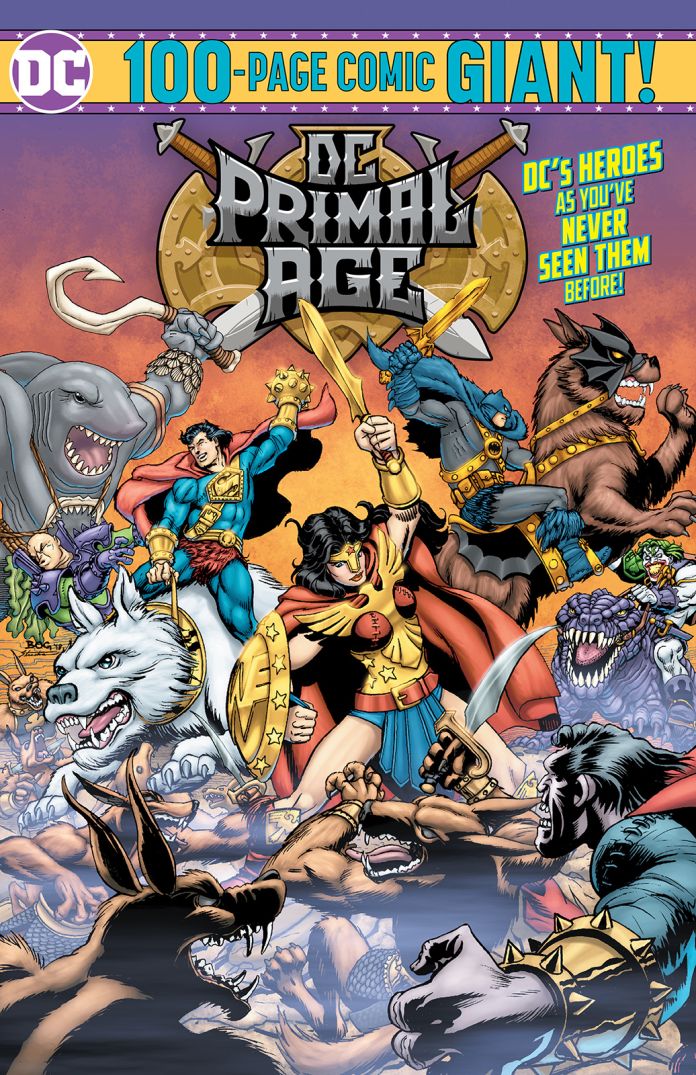 Overview: The heroes of DC burst into a “Primal Age” of adventure and derring-do!

At night, a cloaked Wonder Woman tries to steal a precious glowing orb of Apollo, but a horse-riding Batman stops her. While they fight, the Joker steals all the rest of the orbs, leaving only the one Wonder Woman is protecting.

Batman and Wonder Woman fight over the orbs. Wonder Woman wants to save the world, as the orbs are desired by Joker and King Shark to destroy the world. Batman forces Wonder Woman to take him to Aquaman to explain the plan in more detail. Using Poseidon’s puffer fish, they dive into the deep ocean.

Aquaman meets them and takes them to Atlantis, showing them another protected Apollo orb.

Joker and King Shark work together with Mr. Freeze, an ice sorcerer, and plot to attack Themyscira next.

Batman, Wonder Woman, and Aquaman are greeted by the Amazons, who have also recruited Green Lantern, Superman, and the Flash, a true League of Heroes. Using the two orbs they have, the Amazons locate the other orbs, and the heroes split up to find them.

The Flash and Green Lantern are stymied by Joker’s Hyena henchmen and the Golden Knights of Qwardia. They are then mind controlled into capturing Superman. Scarecrow uses his fear gas to control more and more heroes, including Aquaman. Joker reveals he plans to sink Themyscira just as the orbs once sank Atlantis. Somehow, Superman breaks free of the mind control, and he, Wonder Woman, and Batman fight the rest of the heroes. The heroes prevail, breaking their friends free of the mind control by knocking out Scarecrow, and they all work together to physically prevent the island from sinking.

Despite Batman’s distrust of Superman, they discuss working together to stop future villainous plans in a League.

Story #2: Born on a Monday, a Wonder Woman and Solomon Grundy story, Written and drawn by Jerry Ordway

A prequel to “Primal Age.” We discover that Mr. Freeze, a sorcerer of Ice, once froze his beloved Nora in a kind of King Midas accident where his touch turned everything to ice (instead of gold). A dragon attacks him in his ice palace, and after a fierce battle, he turns it, too, to ice. King Shark approaches him and says that sinking Themyscira will give him enough magick to restore his love.

Batman battles foul fiends from hell to defend an injured Lucius Fox. A mage is behind the fiends, and Batman forces him and his minions to flee. Lucius, another mage, heals him from the wounds of the fight and recognizes him as Prince Bruce from the bat-birthmark on his shoulder, as he served Bruce’s grandfather. Batman distrusts mages since his parents were killed by one. He now lives in a cave, acquiring skills and protecting people until he can retake his kingdom.

Lucius gives Bruce a crystal ball through which he can see who needs help, then transforms his garb into magical armor. Though Lucius suggests a magic horse, Bruce prefers riding his giant armored hound, Ace.

The Joker and his hyena henchmen invade a town, and he plays cruel mind games with the inhabitants before killing them all with his Joker gas. He also gains a glowing green orb…

Story #6: Not a Bird, a Superman, Batman and Bizarro story, Written by Marv Wolfman, Art by Keith Pollard

Superman appears to have attacked a dam, putting Gotham village in danger. They light a fire in a tent with a Bat shape cut out, signaling Batman that his fears of Superman turning evil have come true. They head to Metropolis shire, and he gains aid from Thane Hamilton at Arkham Dungeons. His green kryptonite lance fails to harm “Superman,” so he follows the flying man to Bastion Noir, a deserted castle. There, the real Superman is imprisoned with green kryptonite chains. Bizarro appears, attacking the pair of heroes. They work together, using the blue kryptonite to imprison Bizarro in Arkham dungeons. Batman reveals he has all types of Kryptonite ready in case Superman goes evil, and Superman agrees that it’s probably for the best.

Analysis: This 100-page anthology of merchandise tie-in stories presents the kind of fun usually found in the classic Elseworlds line. Unfortunately, unlike the strongest Elseworlds tales, the art of this collection doesn’t create really memorable panels or splash pages. While stories like Chuck Dixon’s Justice Riders (with J. H. Williams III) and Leatherwing (pirate Batman, illustrated by Enrique Alcatena) created visually rich worlds with humorous and exciting riffs on beloved characters, Primal Age takes an intriguing concept – a medieval Batman and Justice League in a world infused with magick – and renders it with bland visuals and uninspired designs. It is a shame, since with writing talent like Marv Wolfman and Louise Simonson, truly A-list artists, such as seen in the Walmart exclusive tales in the likes of Chad Hardin, Nick Derington, and Andy Kubert, this Target exclusive could have added to the ranks of truly memorable Elseworlds books.

The aesthetic and worldbuilding also presents some problems. Though some ideas – like Batman being a prince in disguise, distrusting mages and superpowered beings because of their tyrannical tendencies – work well, others, such as Superman having a club for a hand, or Batman’s gear being magickal – don’t present nearly as clean a transition from the “main” idea of the characters. The Joker as an evil barbarian is fairly clever, if a bit unpleasant to wallow in for an entire story, and Mr. Freeze’s backstory is a clever combination of myth and continuity with the Midas touch. The use of classic mythological and Middles Ages tropes will likely appeal to those who have fond memories of such properties as Conan or Tarzan, or the new She-Ra show.

Final Thoughts: Some of DC’s classic writing talent provides a fun if a fleeting glimpse of a unique Elseworld.