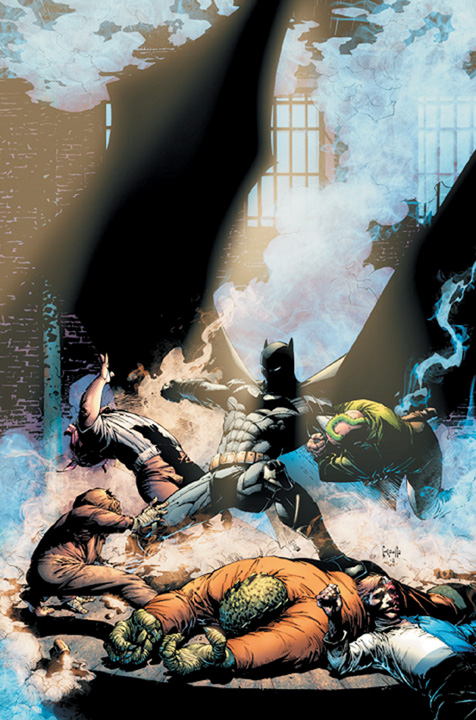 DC has released their solicitations for September and although there are few differences from the announcements that were released last week, there are a couple of changes.

Be here for the start of a new era for The Dark Knight from writer Scott Snyder (AMERICAN VAMPIRE, BATMAN: GATES OF GOTHAM) and artist Greg Capullo (Spawn)! A series of brutal killings hints at an ancient conspiracy, and Batman learns that Gotham City is deadlier than he knew.

Africa, a land of beauty – and of great horror. A land of creation and conflict. It is in desperate need of a defender, and from the ranks of Batman Incorporated comes a soldier to carry on the legacy of The Dark Knight in the most tumultuous region on Earth. Meet Batwing, the Batman of Africa!

The Dark Knight struggles against a deadly – yet strangely familiar – foe in this phenomenal debut issue from superstar writer/artist David Finch (BRIGHTEST DAY, ACTION COMICS)! As a mysterious figure slinks through the halls of Arkham Asylum, Batman must fight his way through a gauntlet of psychos, and Bruce Wayne faces the unexpected legal ramifications of Batman Incorporated!

Battling evil with his son, Damian, at his side, Batman now realizes that the hardest part of the job may be trying to work together! As Batman and Robin try to adjust to their new partnership, a figure emerges from Bruce Wayne’s past: His name is NoBody, and he’s not happy that Batman Incorporated is shining a light on his own shadowy war against evil…

Yes, it’s really happening! Barbara Gordon is back as Batgirl – and she’s going to have to face the city’s most horrifying new villains as well as the dark secrets from her past. You won’t want to miss this stunning debut issue from fan-favorite BIRDS OF PREY writer Gail Simone!

At last! Batwoman’s new series begins, from the multiple award-winning creative team of J.H. Williams III and Haden Blackman! In “Hydrology,” part 1 of 5, Batwoman faces deadly new challenges in her war against Gotham City’s underworld – and new trials in her life as Kate Kane. Who or what is stealing children from the barrio, and for what vile purpose? Will Kate train her cousin, Bette Kane (a.k.a. Flamebird), as her new sidekick? How will she handle unsettling revelations about her father, Colonel Jacob Kane? And why is a certain government…

One is wanted for a murder she didn’t commit. The other is on the run because she knows too much. They are Dinah Laurel Lance and Ev Crawford – a.k.a. Black Canary and Starling – and together, as Gotham City’s covert ops team, they’re taking down the villains other heroes can’t touch. But now they’ve attracted the attention of a grizzled newspaper reporter who wants to expose them, as well as a creepy, chameleon-like strike team that’s out to kill them. Don’t miss the start of this hard-hitting new series from mystery novelist/comics writer Duane Swierczynski (Expiration Date, Cable).