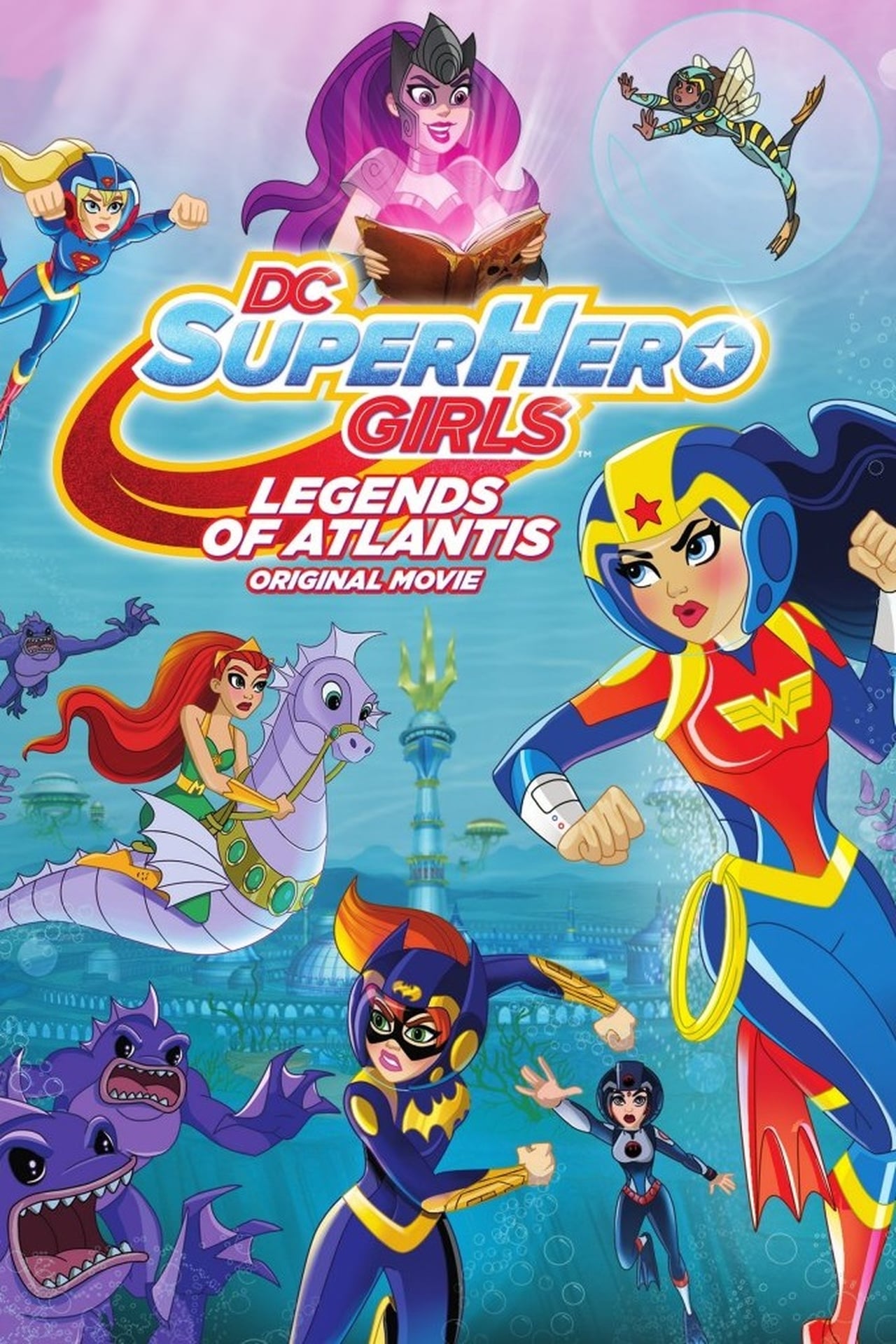 Overview: The latest DC Super Hero Girls outing creates a new backstory for Mera in a feature-length movie with a massive cast of recognizable characters. In the universe of the show, a majority of DC’s superheroes are aged down to attend Super Hero High School. Most of their original backstories are changed dramatically.

Synopsis (spoilers ahead): As children, Mera and her sister Siren find (steal) a magical book which Siren intends to use in an attack on Atlantis. Mera is reluctant to use force to create a new home- even more so when her sister nearly drowns a young Wonder Woman on the coast of Themyscira. Siren loses the book in the struggle and has to delay her hostile takeover until it can be located. Years later, high school age Wonder Woman is horrified when Hawkgirl brings the book to class having found it on an expedition. She and her Super Hero High School classmates race to lock the book away, but their efforts prove futile as Mera and Siren arrive and reclaim it. The students find themselves in a race against the clock (and under the ocean) to retrieve the book before Siren sinks Metropolis. Luckily, Mera has had enough of her sister’s bad behavior and joins the heroes to overthrow her and return Aquaman to his throne.

Analysis: Sibling relationships are complicated. One second you’re best friends and the next you’re battling it out in the middle of a magic-fueled coup to save thousands of innocent people from being plunged into the ocean. When you say it out loud, kids movies start to sounds vaguely Shakespearean. Keeping in mind that this is a kids movie, one that branches from a franchise meant to sell toys, is a critical component to enjoying any part of this movie. But while we’re on that train of thought, the 1997 disaster Batman & Robin was also written around a line of toys, so there’s a precedent here of DC building narratives around what will make a cool playset rather than what will make a great story.

The movie has its good elements. For one, veteran voice actor Tara Strong voices Harley Quinn, Raven, and Poison Ivy. It would almost be easier to list the cartoons Strong hasn’t been a part of over the ones she has, but she’s most recognizable as the voice of Raven in the original animated Teen Titans, as well as Teen Titans, Go!

As both Raven and Harley, Strong is the driving force between one of the movie’s more entertaining subplots. Raven, true to her character, is the school loner. Her inability to control her powers makes her anxious and insecure around her superhero classmates. Harley Quinn recognizes this and makes it her mission to help Raven. Are Harley’s methods effective? No. But they are funny, especially when she does a brief impersonation of a psychiatrist in hopes of pinpointing Raven’s mental block. It’s a welcome throwback to the Harley Quinn origin story from Batman: The Animated Series. Harley and Raven are fun to watch together. Raven is a dark cloud of insecurity but placed next to Harley’s devil-may-care ridiculousness, the contrast is genuinely enjoyable. It’s a team-up I wouldn’t mind seeing again, especially with the addition of Starfire.

Raven and Starfire aren’t the only Titans to make an appearance. Beast Boy plays a main role in the movie and seems to be as much a part of the team as Wonder Woman or Batgirl. He works very well in the group, and doesn’t seem to mind being included when Wonder Woman says “Let’s go, superhero girls!” He’s comic relief DC can rely on in the best way.

Additionally, the gigantic cast of characters leaves room for multiple subplots, each highlighting a different pair of heroes. One pairing I enjoyed was Mera and Wonder Woman. The tension caused by Wonder Woman’s initial dislike of Mera brings back another timeline in which the two did not exactly see eye to eye. If you’re familiar with the Flashpoint storyline, Wonder Woman and Mera’s relationship is a bit of a sore subject. Luckily, they work it out much more diplomatically in this story. While some of the subplots are endearing or funny, there are some issues that raise a question of whether or not certain characters even had to appear.

Age changes are the first problem. As I said, you have to wipe what you know about DC characters to really enjoy the film, but some changes don’t make a lot of sense. Wonder Woman, Batgirl, Supergirl, Harley Quinn, Mera, Aquaman, Flash, Cyborg, Raven and more are all high school students. Commissioner Gordon and Amanda Waller are adult teachers. It feels a little odd that Justice League members are classmates of Teen Titans, and even more odd that Wonder Woman is not a full adult yet and aging in step with heroes that are the generation below hers. Realistically, Wonder Woman would not have left Themyscira while still a kid. It’s not a problem kids will pick up on, but it’s difficult to put aside as the characters are introduced. Notably, Batman and Superman do not make an appearance. That’s probably for good reason as Batman can’t be the same age as Teen Titans, but also can’t be a full adult when Wonder Woman is still a teenager. Furthermore, Robin and any other ‘kid sidekicks’ are not included.

The heroes all call one another by their formal hero aliases, except for a brief moment in which Commissioner Gordon calls Batgirl Babs. He’s her father so it fits, but it feels strange for a group of “best friends” to never address each other by their actual names. I also found myself a bit lost on how Commissioner Gordon can be both a teacher and the Commissioner of Gotham City Police at the same time. Apparently, he’s figured it out. The students remark to him that he is “the authorities”, so both careers still stand.

Final Thoughts: Overall, DC Super Hero Girls: Legends of Atlantis is an age-appropriate telling of Mera and Aquaman’s first meeting; albeit one he does not play a huge role in. The point is developing an interest in superheroes (and superhero merchandise) for young kids, especially young girls, and it does a wonderful job of that. Fifteen years ago, this could have been one of my favorite movies, and in that, it is a project done well.

Editor’s Note: DC Super Hero Girls: Legends of Atlantis is now available on Digital HD and DVD. You can order your copy, and help support TBU in the process, by heading over to Amazon.