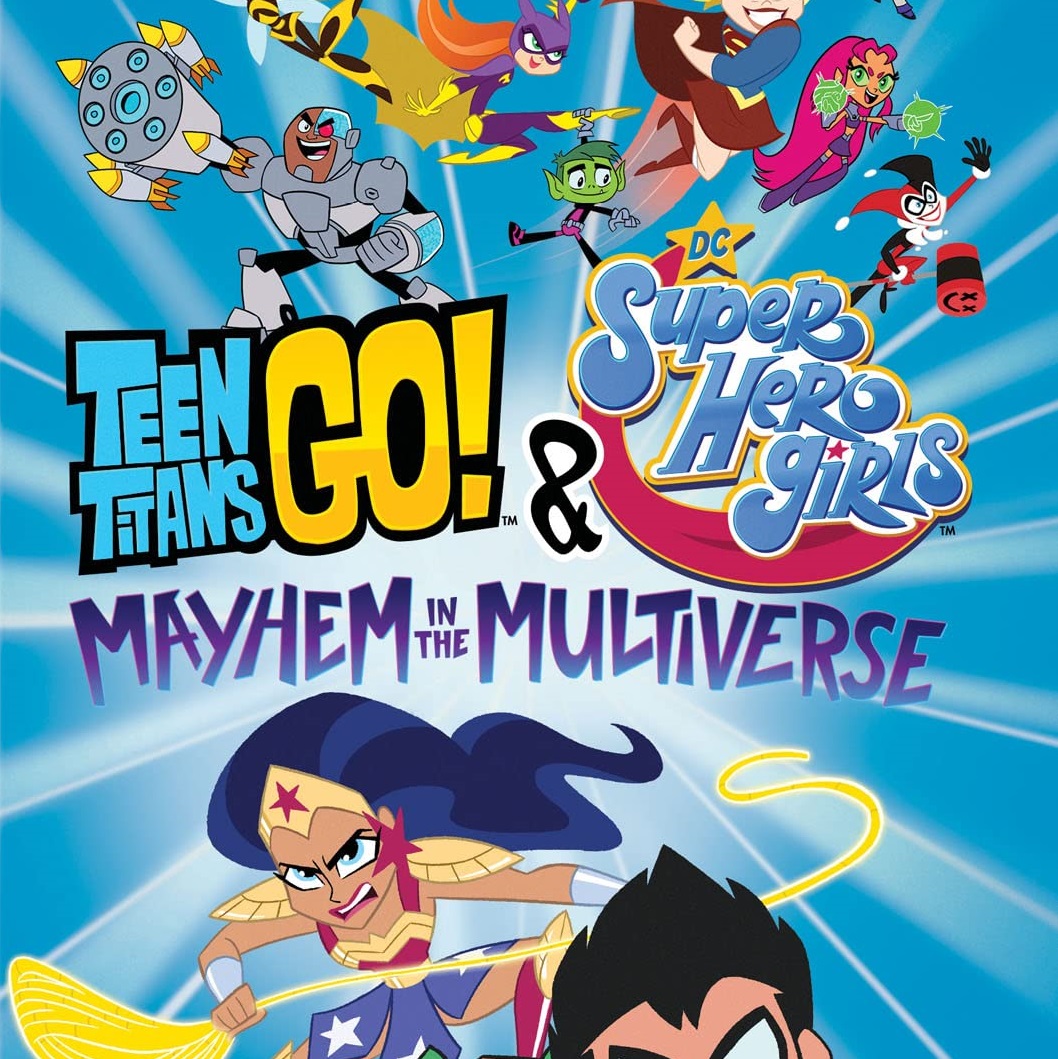 Overview: The multiverse has never been hotter and DC Animation looks to capitalize by having the Teen Titans team up with the DC Super Hero Girls after Lex Luthor and an old Krytoinian goddess trap heroes in the Phantom Zone in Mayhem of the Multiverse.

Synopsis (spoilers ahead): Mayhem in the Multiverse opens with the Teen Titans excited about a new TV unit that they found but are disappointed that it is crooked on one end. Beast Boy finds a random crystal on the ground (remember this) and uses it to make the shelf even. Their villain Control Freak pops up on the screen to let them know he has a new movie to watch with them called “Super Hero Team Crossover Event”. The Titans decide to watch with Control Freak.

Smash cut to the team of Wonder Woman, Batgirl, Supergirl, Bumblebee, Jessica Cruz, and Zatanna, better known as the DC Super Hero Girls take on Catwoman, Harley Quinn (who is friends with Batgirl), Giganta, Poison Ivy, Livewire, and Star Sapphire. The Girls are able to capture the criminals but then a purple light takes the villains to Lex Luthor’s hideout as he offers them a role in the Legion of Doom. Lex lets them in on his plan to rid the world of heroes and tells of an ancient Kryptonian crystal he found that contains the dark goddess Cythonna. Lex has agreed to help Cythonna take over the body of Superman.

The Girls head to the Fortress of Solitude to learn about Cythonna but are stopped by the Justice League consisting of Superman, Batman, John Stewart, and Aquaman (voiced by Will Friedle doing his best Matthew McConaughey from Dazed and Confused impression). The League tells them that they will handle Lex and his Legion. Superman recruits Wonder Woman to join them and they head to Lex’s headquarters. The League is ambushed however and Batman, Aquaman, and Stewart are sent to the Phantom Zone. Superman is trapped in a Kryptonite prison. Wonder Woman is able to escape with the help of Harley Quinn, who has become unnerved by how evil the Legion truly is.

Meanwhile, we cut back to the Teen Titans who question why they are even in this movie (same here) and start to sing a song called “Don’t Crossover My Heart”. They once again comment how the DC Super Hero Girls follow a continuity but their ratings just aren’t as good as theirs.

The Girls break up for a short period of time but thanks to Harley they realize they need to be together and go get Wonder Woman back from Themyscira. Lex shows Cythonna the captive Superman but says that she wants Supergirl’s power because she has yet to reach full strength.

Bumblebee creates a device that can access the Phantom Zone but they need to use Zatanna’s magic. She’s afraid because dark magic has been slowly taking over her. Supergirl hears the voice of Cythonna and asks her team to trust her as she flies off to confront her. The rest of the team heads off to find the heroes in the Phantom Zone but Zatanna’s magic goes haywire and they end up in the Teen Titan’s universe. Finally a team-up! The Titans tell the girls that universe-saving battles aren’t really their thing but agree to help them get home. Raven helps Zatanna control her dark magic. Cyborg helps Bumblebee find the battery she needs for her device and the Titans wish the Girls luck on their journey. As that happens we cut back to the Titans watching with Control Freak and they comment they already know this happened and Control Freak tells them to keep watching.

The Girls are able to free the League in the Phantom Zone but as that is happening Cythonna takes control of Supergirl’s body. The Girls and the League show up at the Legion of Doom’s headquarters and quickly take down the villains with the help of Harley Quinn saving her best friend Batgirl. Supergirl and Cythonna have a mind fight in Kara’s mind but she is able to trap Cythonna in another crystal. Zatanna then sends Cythonna off into another dimension.

The DC Super Hero Girls enjoy their victory and let Harley Quinn on the team after she helped them when they needed it most.

Analysis: If you went into Mayhem in the Multiverse because you’re a Teen Titans Go fan and you loved them in Teen Titans Go To The Movies and Teen Titans Go vs Teen Titans then I am sorry you were tricked this bad. Them not being in this movie that much and having the focus be on the DC Super Hero Girls was part of the joke and I can appreciate that type of fourth-wall-breaking humor but I can also understand if someone is frustrated by that.

I have never seen DC Super Hero Girls and I dont think I’m the target audience for it but I can see that it can be a good gateway for younger kids to become fans of comic books. Mayhem in the Multiverse seemed to recall a lot of things that happened in the series such as Batgirl and Harley Quinn finding out their secret identities.

There were some pretty good jokes mostly about how the Titans were used to boost ratings. One joke about the Teen Titans will be rebooted into a gritty live-action series aimed at adults. I enjoyed one joke about Batgirl claiming she did better than Batman her first time-fighting Bane.

Editor’s Note: Teen Titans Go! and DC Super Hero Girls: Mayhem in the Multiverse is now available on Digital HD, DVD, and Blu-ray. You can order your copy, and help support TBU in the process, by heading over to Amazon.