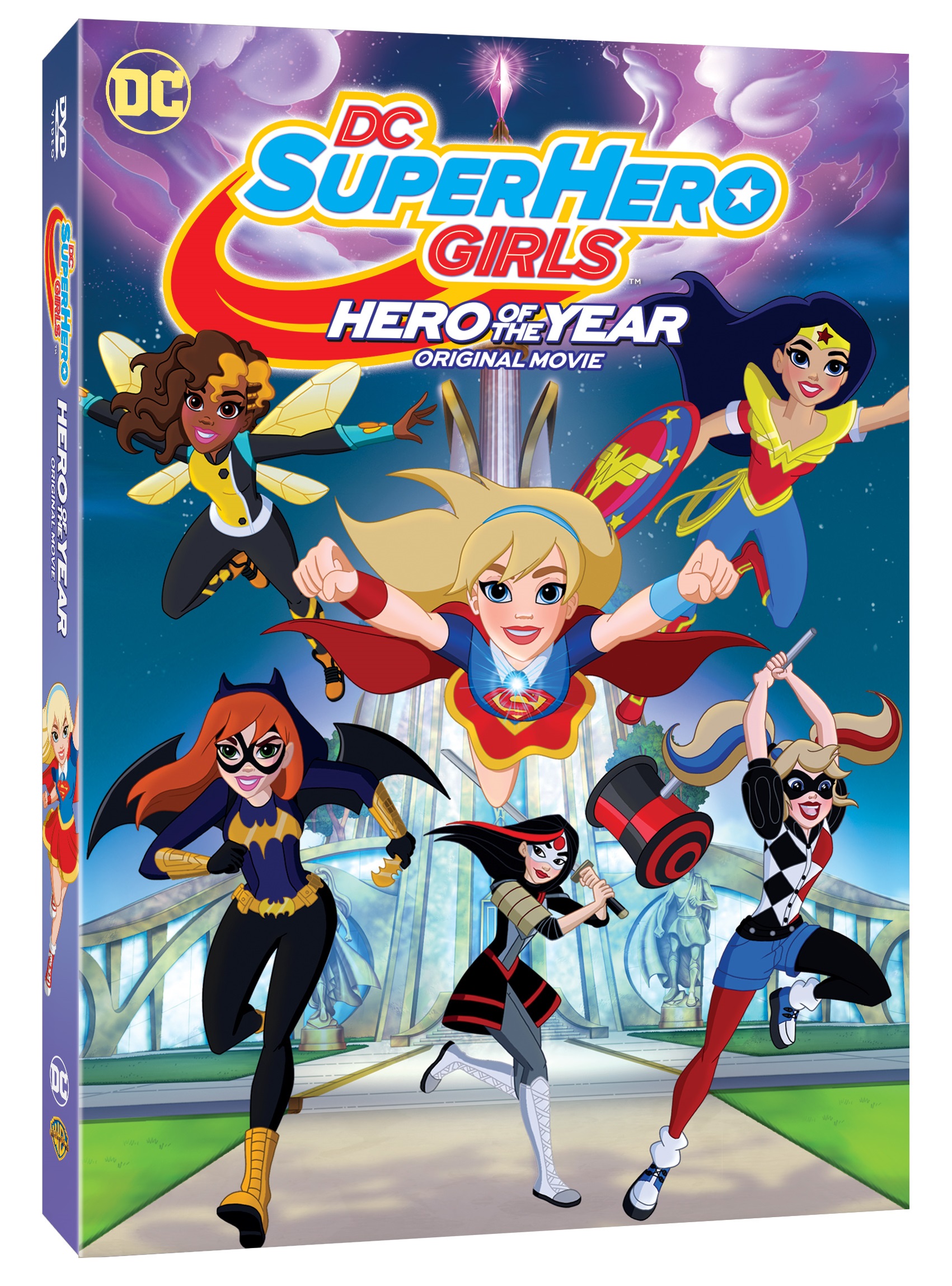 DC Super Hero Girls: Hero of the Year is a direct-to-video animated film (and the first) based on the DC Super Hero Girls franchise.  At SDCC 2016, Jennifer Coyle, producer for Hero of the Year, described the movie as “The heroes of Superhero High take on their darkest foes yet.  Dark Opal and Eclipso try to channel the powers of the amethyst at the top of the school in order to plunge the world into darkness and take over.  Superhero High is the only thing standing between them and world domination.”

For anyone who currently watches the DC Super Hero Girls shorts, this continues to capture the fun, heart, and uplifting messages that have been standard for the series.  While you do not need to have watched the shorts to fully enjoy the film, it is good supplementary material, and the shorts along with this film work well together.  The film continues to present positive messages for girls and depicts superheroes that can act as role models for younger girls in their actions, words, and dress, and show that the superhero community, as well as the real world, is diverse in race, background, and powers.

Since the film has a running time of 76 minutes, it is able to explore certain dimensions of the story that the shorts do not have time for.  There is a good mixture of the heart that we have gotten used to with the shorts in addition to a greater percentage of fighting that one would expect from a superhero film. The use of Eclipso and Dark Opal is a unique and successful choice because they are villains not generally used in features (besides Eclipso’s appearance in the Justice League cartoon episode “Eclipsed” and the animated film Batman/Superman: Public Enemies).  Viewers could easily accept that Eclipso and Dark Opal just want to take over the world, but the interstitial backstory gives “means, motive, and opportunity” (thanks Commissioner Gordon) as well as providing viewers with a worthwhile glimpse of Princess Amethyst and Gemworld in a major media production (not just a DC Nation short).

Hero of the Year solidifies the main cadre of student-heroes as being Supergirl, Wonder Woman, Bumblebee, and Batgirl, but it also gives focus to characters not seen before or not given much time in the shorts like Hawkgirl, Lady Shiva, Big Barda, and Beast Boy.  Whereas Wonder Woman has been the lead for the most part in the shorts, Supergirl steps out of her shadow in this one, receiving a backstory and personal struggle that adds a deep emotional element to the character and film.  One of the themes in this film is family and what families look like.  We see this most in Supergirl’s story, who is struggling with having lost her parents and feeling like she doesn’t belong with the Kents nor comfortably accepting their love.

Wonder Woman is also given some more backstory and we get to see what her home Themyscira is like.  Hippolyta, her mother, is the model of a proud parent, and the room in the palace filled with Diana’s awards as well as her expectations that Diana will win Hero of the Year put pressure on Diana to succeed and cause her to fear failing her mother.

Bumblebee is dealt a handicap midway through the film and must deal with still helping out and fighting without her full power-set.  Through her, as well as other depowered characters like Harley Quinn and Batgirl, we see that powers do not make the (wo)man, and anyone can be a hero with or without powers.

Finally, Barbara Gordon is given a great spotlight in several ways.  First, we get to see her more as Batgirl, keeping up with the girls with powers.  Second, there is a major focus on her technological abilities with the several appearances of her helper “Oracle.”  We also see that she has a little bit of Batman in her since she has mini-Batcaves all around the city and one in the Capes and Cowls Café.  Finally, we get several nice moments of her relationship with her father, who is a faculty member in this film.  Jim does play the worrying-father a little bit, but the relationship between the two is sweet and you can tell how proud he is of his daughter.

Other themes in this film that will resonate with viewers are giving people second chances (which is seen in Big Barda’s story) and authenticity/being true to who you are (Hawkgirl “training” Beast Boy).

As is true of all appearances of the DC Super Hero Girls line, there are so many fun moments interspersed throughout that will make you smile.  Of course, Harley Quinn is the one who adds some screwball comedy and the most apparent jokester, but you will love seeing Giganta do community service by towing (ie. throwing) cars to the impound lot, or Parasite as the janitor and groundskeeper of Superhero High who keeps getting his work messed up by the heroes.

I will not ruin who gets the Hero of the Year award, but I will say that I disagree with it.  The reasoning is sound, but I was hoping Supergirl would receive the award (even though she did not technically qualify nor was she nominated since she was a newer student) because of the progress she made under all the pressure and emotional difficulties whilst fighting Eclipso and Dark Opal.  She did throw herself in the way of a beam which was going to hit Wonder Woman!

In any case, this is a great and (should I say it again?) fun film that I recommend to any comic fan.  The wealth of comic knowledge and little nods to DC Comics history is a treat for even the most experienced comic lover (for example Lois Lane asking Vice-Principal Grodd about how he got out of prison and his involvement with Waller’s squad release program).  This film, and the DC Super Hero Girls line as a whole, is a gateway for younger audiences and girls especially to get into comics, we just need more age-appropriate comics to support this visual incarnation.

DC Super Hero Girls: Hero of the Year is available now both in Digital HD and just released today, on DVD. You can order your copy of the DVD on Amazon by clicking here.