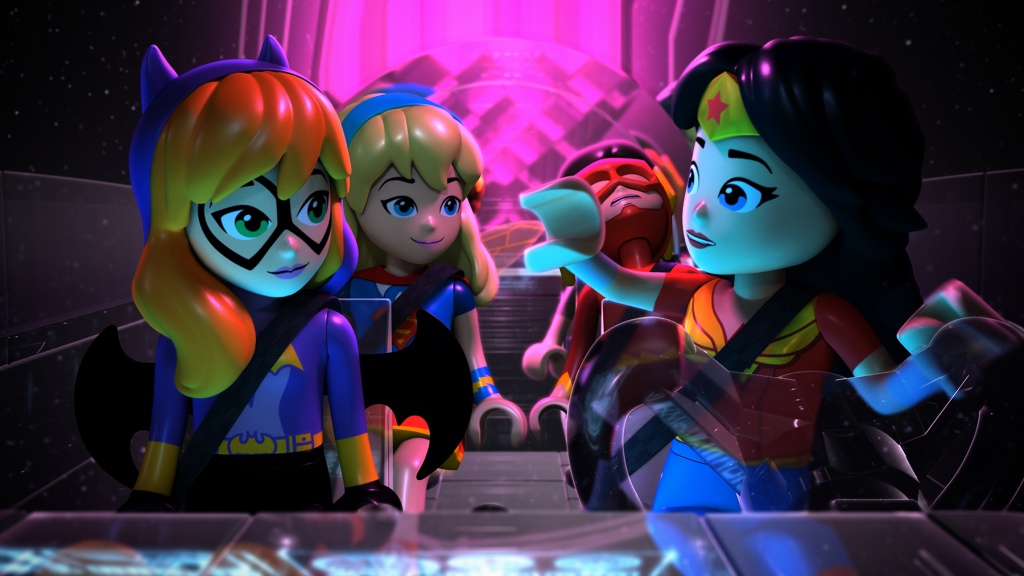 LEGO DC Super Hero Girls: Brain Drain is an upcoming direct-to-video animated film and the third entry in the DC Super Hero Girls film series. It premiered on July 23, 2017, at San Diego Comic-Con International, and it has been released on Digital HD on July 25, 2017 and will release on DVD on August 8, 2017.

The film begins with Supergirl, Wonder Woman, and Batgirl happening upon a robbery being committed by their best friends: Bumblebee and Katana. After a failed chase, the three friends return to Super Hero High but wake up the next day with a gap of time missing from their memory. They cannot remember a single moment from their Monday at Super Hero High, and several people in the school (students and faculty alike) are upset with them for various reasons. The young heroes band together to retrace their steps and uncover the mystery of who exactly stole their memories – and what nefarious plan might be afoot?

Creators and actors alike commented on the fact that this film is meant to be different from the other films that have come before it. They have fully embraced the Lego aspect of the story, saying that the “humor is more pointed and irreverent” and the film has “aged-up in tone” slightly. In fact, there are a few times where the characters break the fourth wall and either make a comment regarding the film or stare directly at the camera. Jeremy Adams, the writer of the film, remarked that he used the LEGO sets as inspirations and even pushed the vehicles of the different characters to do more things. “I felt like the vehicles should be able to do whatever the character driving them can do.”

All the actors commented on the fact that they are playing characters that mean a lot to young girls and women. They also recognized that they are participating in something special during a special time—more female heroes being portrayed in different forms of media. Grey Griffin commented that she “is not famous enough to not buy things that I am on,” and shared an anecdote where she bought several items from Target which had her Wonder Woman character on it. The film steps up the hi-jinks, which impacts the portrayal of, and performance of, the different characters. Anais Fairweather commented that she changed the Supergirl voice slightly; Tara Strong said her Harley is “reminiscent vocally [from her other representations] but from a perspective of her inner dialogue it’s a different person;” and Grey Griffin noted that there are some “parent-jokes” in the film.

The franchise continues to focus on strong female friendships which are neither catty nor cliquish. Grey Griffin also commented on how the series strives to find a balance between a lighter tone and tackling serious issues that occur in school and real-life settings. Tara Strong noted that these girls have not yet “been tainted by evil” and that they “are doing things that regular high school girls do.” The film also makes subtle nods to the previous stories in the DC Super Hero Girls series, so it is not completely a stand-alone.

I stayed and watched the premiere on Sunday, and while I continue to enjoy this series, I did feel like something was missing from this particular film.  The humor was fun, and the creators made a LEGO movie distinct from the LEGO DC Super Heroes films. While Hero of the Year was able to incorporate many different characters, it seemed like this film focused mainly on Wonder Woman, Supergirl, and Batgirl. This is not necessarily a bad thing, but I feel like one of the successes of the franchise is the fact that it surveys a wide group of heroes and heroines, and this was missing from the film. This film also did not include the creator and lead-writer of the series, Shea Fontana. Perhaps this is why it felt weaker to me and as if something were missing. Nevertheless, I do still support this franchise and I encourage you all to check this film out.

As mentioned earlier, LEGO DC Super Hero Girls: Brain Drain released digitally on July 25, 2017 and will release on DVD on August 8, 2017. You can pre-order your copy on Amazon here.