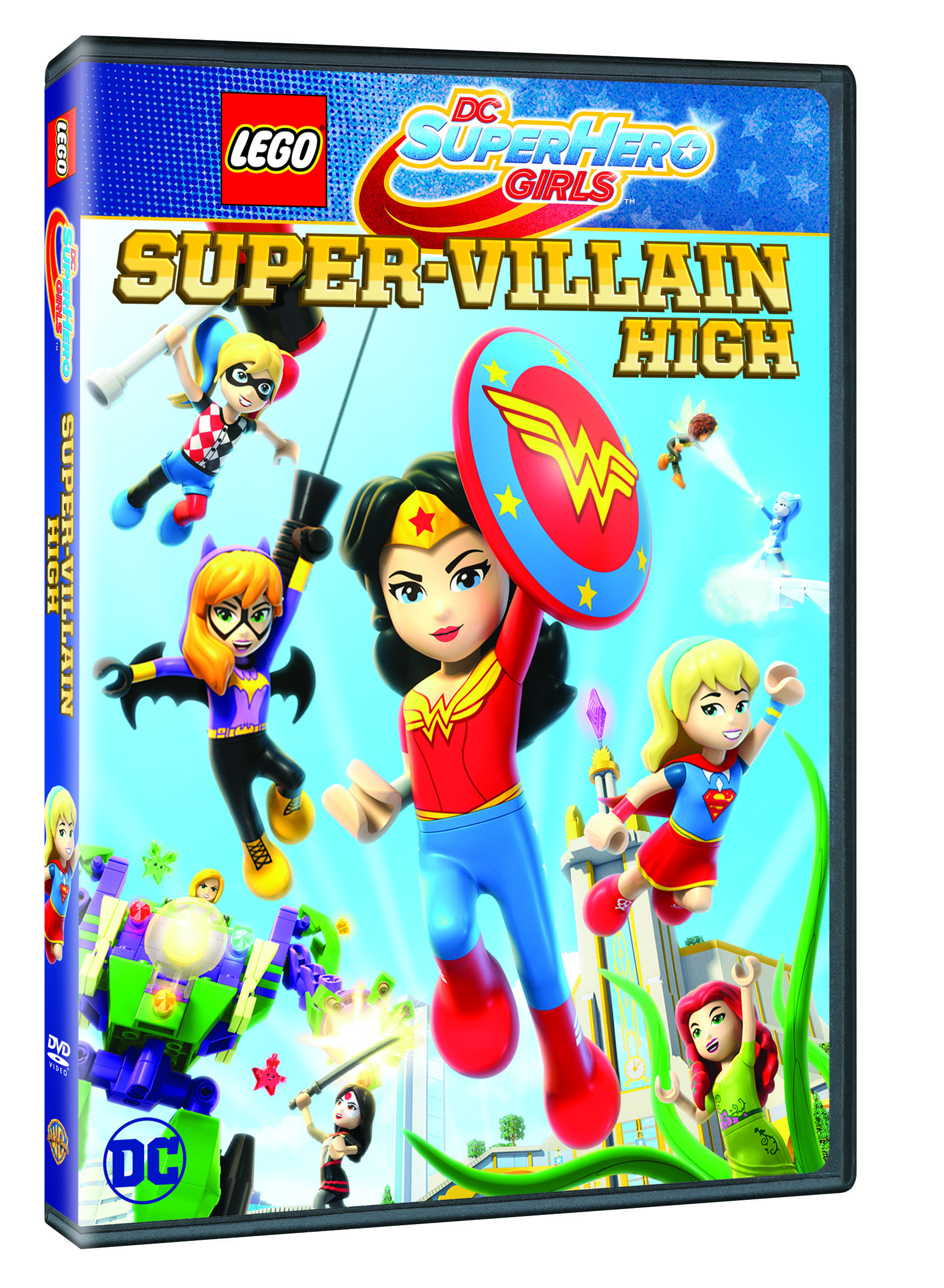 Overview: The DC Super Hero Girls have to contend with a rival school of Super-Villains

Synopsis (spoilers ahead): The movie opens with the DC Super Hero Girls facing off against their villain counterparts in a school sparing match.  The movie then cuts to Lena Luther complaining about being a “B list” villain and decides to build a school of her own.

Principal Waller goes on vacation, leaving Vice Principal Grodd in charge.  Lena Luthor arrives and masquerades as Waller, taking over the school, releasing a group of creatures made of Kryptonite called…ahem…Krypto-mites.  Beast Boy convinces Bumblebee and Katana into an arena face-off, which drags on for hours.  Prof. Oberon teaches a lock-picking class, and as Catwoman is the first one to pick her lock, a Krypto-mite quietly throws down a skeleton key, framing Catwoman for cheating.  Frost and Cheetah are framed in similar ways and sent to the principal’s office.

Supergirl gets a delivery that appears to be from Poison Ivy.  The package grows into a giant Venus flytrap which attacks Supergirl only to be rescued by Green Lantern (Jessica Cruz) and interrupting the still going match between Katana and Bumblebee and in the aftermath, Poison Ivy is blamed.

Catwoman, Poison Ivy, Frost, Cheetah and Harley Quinn are lectured by Lena disguised as Waller, who tells them to rethink their positions at the school.

Batgirl uncovers that Uber High is backed financially by Lena Luthor and decides to send Green Lantern to infiltrate the new school. Jessica Cruz is accepted by the villains and is introduced by the school principal, (Lena in disguise) to the school’s foreign exchange student, Backlash, who the Super Hero girls recognize as Lashina.

The principal sends the villains after a vase inside of Project Cadmus, which is, in fact, alien technology.  The Super Hero Girls decide they have to warn their friends that their new school is a school for villains.  Meanwhile, Katana and Bumblebee are caught by Dr. Fate sleeping through class, having failed a midterm.  Fate takes the two to the “Globe of Fate” for an extra credit assignment and sends the two off after a mystical necklace.  One of the Krypto-mites alerts Lena to Katana and Bumblebee’s assignment and she sends the Krypto-mites after the necklace.  The villains attack Project Cadmus and succeed in breaking into the base, only to be confronted by the Super Hero Girls.  The villains ignore the superheroes warnings and take them down and make off with the vase, still with Jessica in tow.

The Super Hero Girls regroup as Bumblebee and Katana race towards a temple containing the necklace.  The two trigger a trap door and make their way through a booby-trapped passageway, rescuing each other from the traps.

Wonder Woman tells Jessica to get each of the villains one on one to tell them that Lena Luthor is in charge of the school, hoping that they will listen to reason.  Lena, still disguised as the Uber High principal, sends the villains after the magical stones guarded by the wizard Shazam, telling them that the wizard has turned evil.  Green Lantern takes Cheetah aside and tells Cheetah her concerns about Lena Luthor.  Lena appears, having set up Lantern and jammed her communication gear.  Lena unleashes a gang of yellow Krypto-mites against Lantern.

Bumblebee and Katana fight over the necklace at the temple and are surrounded by Lena’s Krypto-mites.  Batgirl, Wonder Woman, and Supergirl board a bullet train to the Rock of Eternity and get an audio message from Lantern, and when they arrive at the Wizard’s lair, find that they have walked into Lena’s trap and are walled into a chamber along with Lantern.  They discover that the chamber they are trapped in is magic as the villains sneak toward the main chamber, where a sleeping wizard guards the gems they are after.  The Wizard goes on a bathroom break, as the villains try to remove the gemstones, causing them to be attacked by the stone idols guarding the stones.  The villains escape through a portal.

Bumblebee and Katana fight off the Krypto-mites, causing a rockslide that traps them in the temple.  The two reconcile, apologizing for being too competitive, and working together they escape the temple.

The Super Hero Girls work together to break free of the temple and are attacked by the angered statues.  They escape by way of Supergirl summoning her psychically controlled Kryptonian jet, which arrives in the nick of time.

Back at Uber High, Ivy, Catwoman, and Frost begin missing their friends, as Lena send the group to steal an artifact from Dr. Fate.  Cheetah suggests that they challenge the Super Hero Girls to a sparring match while Lena slips in and steals the artifact.

The Super Hero Girls arrive back at school to tell their teachers what has happened, only to have Coach Wildcat tell them about being challenged to a sparring match by Uber High.  The groups face off, with the Uber High students reconciling with the Super Hero Girls.  The girls join forces to stop Lena and Cheetah from stealing the Globe of Fate from Dr. Fate.  Lena commands her Krypto-mites after the Super Hero Girls while Lena uses the Globe to complete her mechanized super-suit and turns against Cheetah and the others.  The group fights Lena without effect until the group starts working together while the rest of the group climbs into vehicles to fight off Lena until she gets a hold of the necklace form one of her Krypto-mites, which depowers Lena, defeating her.  Lena escapes, turning Uber High into a giant flying ship, which is destroyed by Katana, Bumblebee and the rest of the group.  Lena and her ship go flying off out of control out of sight, landing in a swamp, where Lena decides to start the Legion of Doom.

Analysis: One of the strengths of the DC Universe as a whole is that it is fairly malleable.  You can bend and contort the characters into any number of iterations and it will still come out as a valid interpretation of those characters.  I do not pretend to be overly familiar with the DC Super Hero Girl franchise, as I’m not really the core demographic for these characters so it’s a bit difficult for me to judge this as a concept.  As I sat down to watch this, I asked my wife to join me. Even though she normally sits out stuff like this, she is a big enough Wonder Woman fan to have agreed to a few superhero touches at our wedding and around our home, she has always said that she wished that there had been more superhero content aimed at her when she was a young girl. It was a fun exercise to watch this through her eyes.  I do have to say, it was disappointing to watch her check out quickly.  She seemed bored and annoyed with the concept and questioned why the movie couldn’t have simply sent a strong group of female characters on an adventure instead of having set the story in high school, as if that was the only way to get their demographic’s attention.

That being said, the story does try to keep a steady through-line about the importance of friendship and the good and bad sides to competition and the main characters are strong and resourceful and there’s an attempt to give the story a moral to it that I think that the other LEGO releases, such as the recent Flash film, weren’t concerned with and its definitely something that any parent could show their son or daughter without any sort of concern for anything objectionable.

The only other flaw I can find with this film is that for a LEGO brand, it’s not very “LEGO-y”.  There are a few late in the game moments that remind you that this is indeed a movie set in the world of LEGO, but it seems perfunctory and doesn’t have the charm that other films such as the last LEGO movie, starring Flash, brought to the table.

The movie is a straightforward story with a good deal of wit to it, and much like the other LEGO movies, there is a definite attempt to entertain any parents that happen to be in the room.  I enjoyed the nods to the source material that were peppered throughout the story, such as Supergirl having her doubts about the powers of a pair of glasses to conceal her identity was very clever for instance, as well as nods to other staples such as Shazam and the Legion of Doom.

The voice cast is full of Warner Animation staples like Tara Strong, Grey Griffin, and John DiMaggio who put out consistently solid work.  I particularly enjoyed the return of Kevin Michael Richardson’s Dr. Fate.  The animation is fairly standard and feels right for a direct to video movie, decent but not hitting it out of the park, which is kind of how I feel about this movie as a whole.

Final Thoughts: This was a fairly middle of the road effort for Warner Animation.  And while there is nothing wrong with the movie, it was capable of being something better than the final product here.  Still, its entertaining enough for the kids with some fun references to the DCU and is worth checking out at least once.

Editor’s Note: LEGO DC Super Hero Girls: Super-Villain High is now available on Digital HD and DVD. You can order your copy and help support TBU by heading over to Amazon.