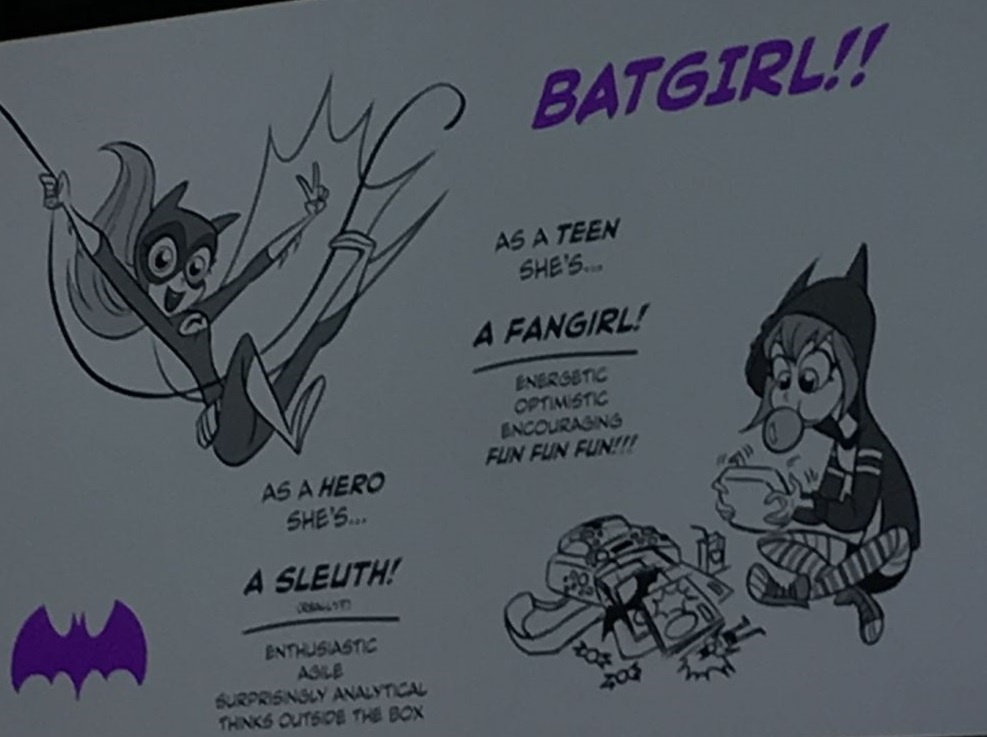 DC Super Hero Girls continues its rise in popularity with the release of new graphic novels and a new animated series coming to Cartoon Network from My Little Pony: Friendship is Magic producer Lauren Faust. This weekend’s panel at San Diego Comic Con gave us our first look at character redesigns as well as what we can expect from the show.

Lauren Faust explained that each of the characters features a dual nature that will be explored in the show such as Batgirl being a fangirl as Barbara Gordon and a sleuth in costume or Supergirl being a rebel as Kara and the muscle as Supergirl. Other characters included in the series are Jessica Cruz’s Green Lantern, Wonder Woman, and Zatanna. Another tidbit that was dropped is that Batgirl and Harley Quinn will be best friends out of costume and not realize that their alter egos are mortal enemies. Rather than being a straight-up villain, Faust says that Harley has good in her but makes bad decisions. “The funnest part is we have a lot of women on our team, and it’s been a lot of fun to dive into our own teenage experiences and bring those feelings and coming of age stories to the table and putting a super spin on it,” said Faust.

The designs of the characters evoke a more stylized look than those found in the previous series and are closer to the designs from the Super Best Friends shorts with Supergirl, in particular, looking rather different and edgier than the Kara we know from the comics and CW show. The girls’ unique designs, especially in their street clothes, should make the show just as engaging when they’re in and out of costume. Be sure to check out the gallery above for all the new designs courtesy of Bleeding Cool.

Nicole Sullivan, who voices Supergirl in the series shared with the crowd how they aim to tell relatable stories saying, “the stories that we’ve done are under lock and key but all very reminiscent of stuff girls go through in high school. What’s so fascinating is you’re seeing these girls do regular stuff, but the stakes are different, not just higher […] That’s what speaks to me. When you’re in high school, everything is drama. This is just big for real.”

While the teens will be the focus of the show, that’s not to say we won’t see some grown-up heroes as well, especially the parents and relatives of the team. “Supergirl and Superman have a pretty strong storyline that will be featured on the show […] We’ve got a thing with Wonder Woman and her mom and Batgirl with her dad,” said Faust.

As for if the show can be enjoyed by boys as well as girls, Faust said “we want the show to speak for itself. I’m a believer in all-ages entertainment. […] We just feel like if it’s good, anybody will watch it. No pun intended: we’re not pulling any punches […] I want to entertain and inspire.” With the original webisodes and animated movies being popular and enjoyed by fans of all ages, the new series should have no problem being viewed by a large audience.

Attendees of the panel got a sneak peek at the series in the form of a short “The Late Batsby” which centers on Barbara trying to sneak out of the house to participate in superheroics. The short will also be seen before Teen Titans GO! to the Movies next Friday.

No release date was announced for the new series but you can be sure we’ll report on it when we know more. Are you excited for the new designs and upcoming shows? Which superhero would you like to see on the show? Let us know in the comments below.