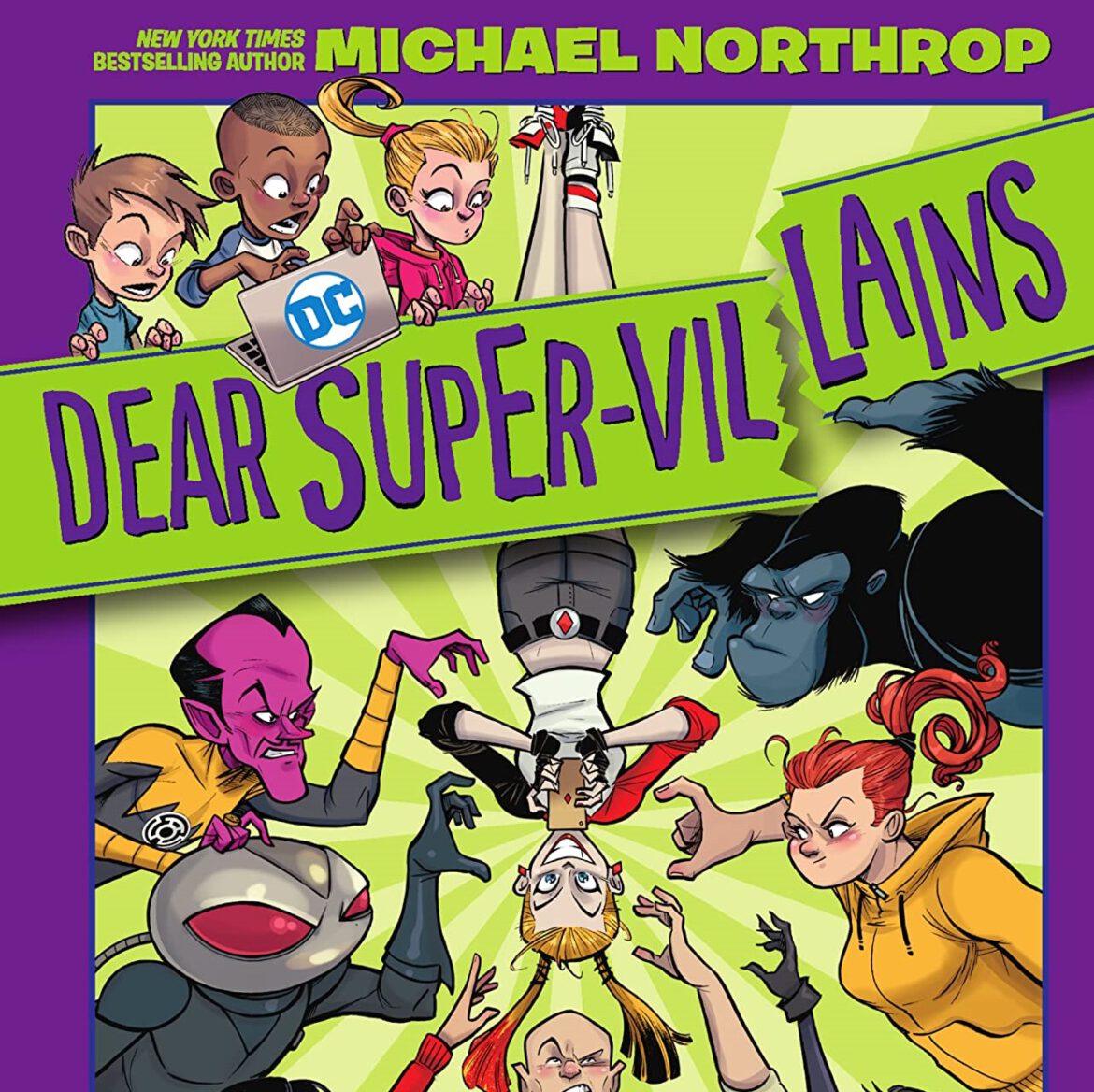 Overview: In Dear DC Super-Villains, the members of the Legion of Doom answer fan mail while they prepare for their raid on Blackgate Penitentiary to rescue their leader Lex Luthor.

Synopsis (spoilers ahead): Dear DC Super-Villains gives different anecdotes involving members of the Legion of Doom as they prepare for their mission to free Lex Luthor from prison.

We start with Catwoman.  She is now in Cairo on a heist.  Her target is a cold cat statuette.  She is found by the tone-deaf security guard.  She escapes with her haul and now she can relax.  She gets a question from a fan.  The fan wants to know how Batman without any powers is able to beat her.  She thinks about this, as all of his attacks and gadgets fail except for one.  The Bat-Laser-Pointer, which makes Catwoman’s cat brain turn on and things get fuzzy for her.  Her answer is that the Bat works in mysterious ways.  She adds that villains don’t tend to stay caught for long.

The next chapter stars Lex Luthor who is now in Blackgate Penitentiary, an interesting choice as it is outside of Gotham and not Metropolis.  Luthor gets some mail.  This fan’s question is why has he not cured baldness.  Luthor actually had cured baldness, he called in Lex-Gaine.  Unfortunately, it worked too well.  Every part of his body that touched the chemical grew red hair.  This posed a major problem when he discovered that the bathroom sink shared a pipe with the shower and his whole body got covered in hair.  He had to shave it all off.

Harley Quinn answers her letter next.  She is asked why she has not tried standup.  Harley actually tried this but it did not go well.  She ended up clubbing the audience with a mike stand.  She writes back saying that she is not great with criticism.  She is interrupted by the daily meeting alert.  She actually misses the meeting and she wishes Luthor was back.

Gorilla Grodd is asked how he got so smart.  After correcting the human that a gorilla is an ape and not a monkey, he recounts his time in middle school.  Grodd was in AP Calculus and he sees a fiery trail in the sky.  At the end of the day, he goes out to investigate and finds a meteor.  He finds it and breathes the vapors which change his brain and creates his superintelligence.   He also discovers that he has mind control capabilities as well.  He has gotten used to this kind of power.

Giganta is on a mission to steal the cablumium molecule.  She is successful and brings it back to the Hall of Doom.  She gets a note from a girl who is the tallest girl in her class.  Giganta tells Lexi the advantages of being tall including rescuing kittens from trees for a price and being really good at basketball.  She suggests that Lexi should enjoy it and she is interrupted by a giant mission sent by Harley Quinn.

Sinestro is asked why he is always so mean.  He ignores his message and runs into the Red Lantern Atrocitus.  He quickly dispatches his rival.  He is soon distracted by a cat and Atrocitus returns. Sinestro leads him away from the cat.  He tells the child that he is always mean as he dreams about the cat in the space station.  The cat belongs to Catwoman, she steals the mega laser that Sinestro was after.

Katana meats Sinestro as he returns to the Hall of Doom.  She does not have time for the Yellow Lantern as she is on her own mission.  She is after a priceless painting of yellow flowers. Katana is asked what is so bad about playing fair and square.  She has to think about her answer but she is busy with her heist.  She successfully steals the painting and escapes by helicopter.  She slices the painting on the return trip to the Hall and hangs her cut of the painting on the wall.  Her response to Haru is that she too likes to play fair and square, she likes to get the nicest cut.

It is sunrise and Black Manta gets the reminder from Harley that today is the day.  He gets a message also from Artie Fishman who is Manta’s biggest fan.  Artie asks what Manta’s next mission will be.  Manta tells Artie what the mission will be and sends it away.  As it turns out, Aquaman is actually Artie Fishman and gets the message from Black Manta.

The last chapter is the mission.  The Legion arrives at Blackgate to spring Luthor.  After arguing, Harley suggests that they compromise and the others are in agreement.  They attack and are repelled by the guards but Giganta uses the cablumium to take out the guards and quickly invade the prison.  They find where Luthor is being held and find one little guard standing in their way.  The guard reveals that she is Hawkgirl and is quickly joined by Superman, Green Lantern (Simon Baz), Cyborg, Flash, Wonder Woman, Batman, and Aquaman. Manta packed some kryptonite which disables Superman and the League is quickly pushed back. The Legion splits up and the League takes them down one at a time because they work together.  Katana is the only one to reach Luthor, but the League is there and Katana decides to escape.  She is captured and all the Legion ends up in prison with their leader.

Analysis: It is worth mentioning upfront that Dear DC Super-Villains is a children’s story.  The art here is very appropriate for this type of story.  The characters are mainly played for laughs and the cartoony style of Gustavo Duarte fits this story very well.  But the thing is, the art fits in this story, but I might find it annoying in another style of story.

Dear DC Super-Villains is actually the second book in a now self-contained series. The first title, Dear Justice League, released about a year and a half ago and this story, in a lot of ways, is a sequel. You can read this story by itself and it works, but it is worth mentioning that it is the second book from the same creative team.

I find the choice of characters interesting.  Northrop uses the usual characters of Luthor, Black Manta, Giganta, and Sinestro, but he adds the unusual characters of Catwoman and Harley Quinn, both not associated that often with the Legion and are now considered antiheroes.  My thought about adding them centers on the popularity of these two characters. I am okay with that particularly when the two pop up in other chapters within the book.  The one character I have a problem with including is Katana.  She can be violent, but here she is depicted as being a villain and a clumsy one at that.  She typically cuts herself with her sword and I am not sure why she is chosen for this story. Katana is usually depicted as a hero and her inclusion on the Suicide Squad usually is because of her skill set and being a reliable second in command. The end of this story finds her incarcerated with the rest of the Legion. It’s an odd choice.

Overall, Dear DC Super-Villains is a fun story with some questionable characters referred to as villains with Zatanna, Catwoman, and Harley Quinn. It's good, but I'm not sure if it deserves a place in my collection.