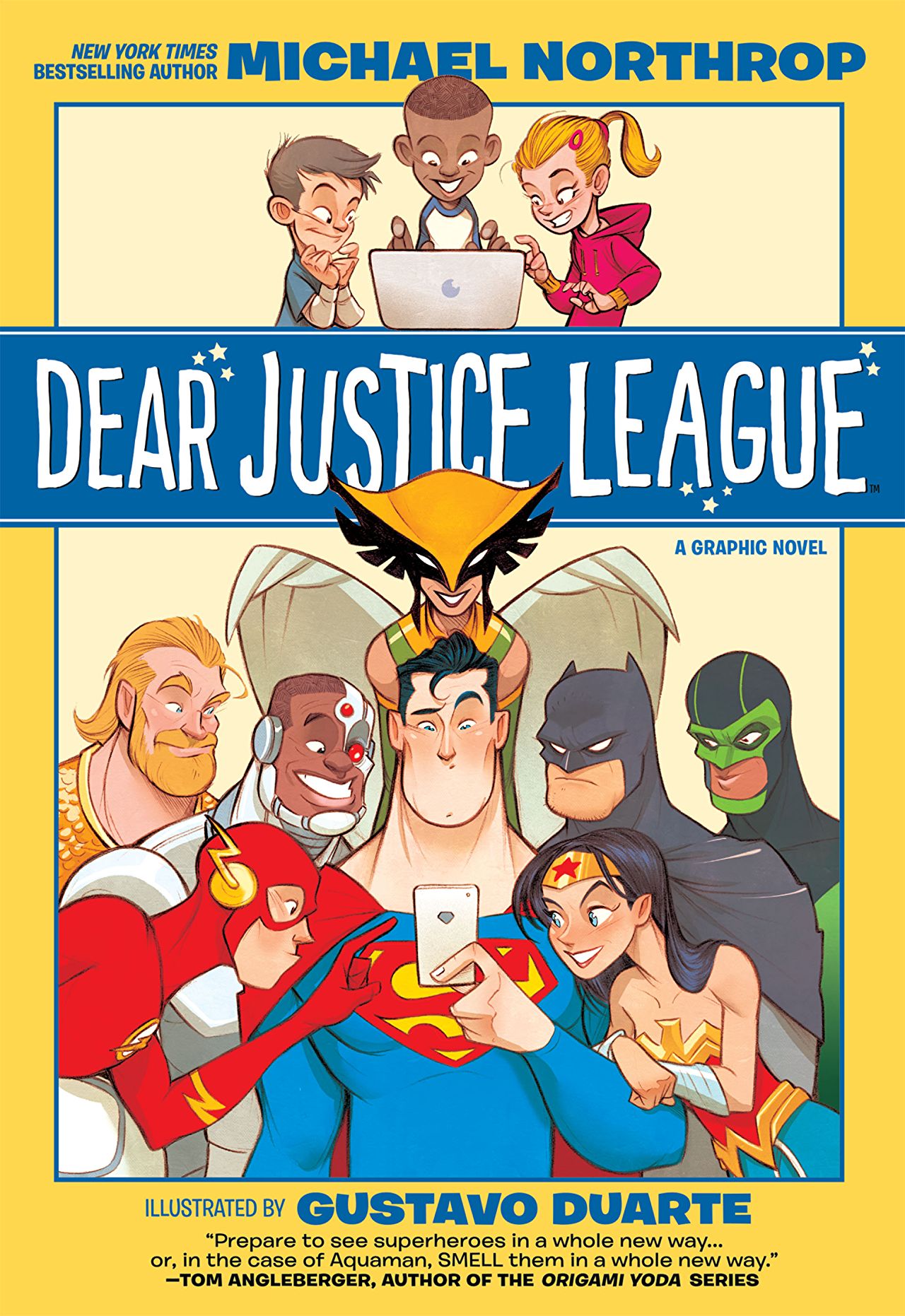 Overview: As the members of the Justice League battle insectoid aliens, they also answer emails and letters from their young fans.

Synopsis (spoilers ahead): Chapter 1: Dear Superman-After a quick summary of his backstory and powers, Superman receives an email from a young fan who has made a mistake, asking if he’s ever made any mistakes of his own. Superman gets the email on his phone while flying, and while he initially thinks he’s never made that kind of mistake, runs into a building because of his distraction. This collision sets off a chain reaction, starting with a window washer falling, to a woman avoiding the washer’s water pail, to a bicyclist distracted by the goings-on, and so on and so forth – as Superman frantically tries to save all the people put in danger by his carelessness. Much, much later, after order is restored, Superman gets a ticket from an unimpressed police officer for texting while flying. Chastened, Superman responds to his fan with humility and admits that he too has messed up big time.

Chapter 2: Dear Hawkgirl-Kendra Saunders, Hawkgirl, finishes up defeating the insectoid warriors from the planet Molt-On, and heads home to the Hall of Justice. After greeting Cyborg, she gets distracted on the internet for several hours. At last, she checks her email, and one of her fans asks if she eats small mammals, like the hawks she shares a name with. Looking at the tiny cute hamster who shares her room, instead of eating him, she gives him food to eat instead, then reports back to her fan with this information.

Chapter 3: Dear Aquaman-Meanwhile, Aquaman tangles with his old foe, Black Manta, on a submarine. He sneaks aboard through a torpedo door, then sidles up to Manta and punches him in the face. He heads back to the Hall of Justice, and Hawkgirl and Superman remind him to answer his emails. After feeding (and chatting with) his fish, he receives an inquiry about whether he smells like fish. Shocked, he tries to smell himself, and can’t decide. He sets off to ask his teammates and overhears Cyborg saying “something’s fishy,” and assumes it’s about him. However, he bumps into Wonder Woman, and she assures him he smells like seaweed, not fish. He sends off a snippy response, as the question itself was rather rude.

Chapter 4: Dear Wonder Woman-Wonder Woman gives the morning briefing to her teammates about the insect invaders, as new reports are coming in of sightings. Back in her classy quarters, Diana checks Superman’s ticket report, and is reminded to check her own email – all four thousand of them! The first she clicks on is from a fan who asks for advice on how to celebrate her eleventh birthday. Diana recalls an incident on Themyscira, where her mother told her not to eat too much cake, but she ignored the wise advice. After a rousing game of “pin the tail on the Kanga – blindfolded!” (which she wins), Diana trains for combat with her Aunt Antiope. However, she eats even more cake after training, and when Antiope surprises her with a sneak attack, she throws up all of her cake. She responds to her fan, telling her to trust her parents and not overdo the partying. She also asks for an invitation to the little girl’s party, then continues on to answer the rest of her emails. Days later, we see Diana celebrating with the little girl and her friends – but refusing an offer of cake.

Chapter 5: Dear Flash-After a chart comparing the fastest things on earth, in which Flash is easily the fastest – we see two rowdy boys complaining about the little girl from the last chapter’s email and party with Wonder Woman. They decide to go to the library and borrow a laptop to write an email to the Flash. They write a very rude email making fun of Flash, but unfortunately for them, Flash decides to answer in person – leading to them being grounded and bored.

Chapter 6: Dear Green Lantern-A quick explanation of Green Lantern powers, we see Simon Baz receive a letter from a young fan about whether he gets bored of wearing green and black all the time. Simon responds that he once got a very colorful uniform, but his teammates were not impressed. Hawkgirl flies by, worried she missed some of the insect invaders before, but Simon assures her they can handle it together.

Chapter 7: Dear Cyborg-At the Hall of Justice computer, Cyborg tries to diplomatically decline a fan’s request to game online, but a battle alert sounds in the midst of his response. The insect invaders from Molt-On have returned! Arriving in Washington, DC, he sees the insects multiplying exponentially, and calls his team to help!

Chapter 8: Dear Batman-In the Batcave, Batman writes letters to his fans. Alfred warns him that the low light is not good for his eyes, but Batman is…stubborn. And he also likes to include cool signed photographs for his fans. His current letter asks for advice about going to a new school after a big move. Batman remembers his first battle with the Joker, and how he had all of his gadgets to help him overcome the new situations. He responds, telling his fan to make his own utility belt with everything he might need, and he’ll never be in trouble. Just as he finishes his letter, he receives the alert from Wonder Woman about the invading insects!

Chapter 9: Dear Justice League-At the US Capitol, the insects swarm. The Justice League quickly scrambles together, and each uses their unique powers to overpower and then send back the evil menace. Hawkgirl makes a quick check and catches the last sneaking insect. Back at the Hall of Justice, the team receives a letter thanking them for saving the day. Flash suggests writing a letter together as a team in response, and each member chips in a lesson from their own personal experiences over the last few days, ending on a message of teamwork and humility.

Analysis: Young adult and middle-grade writer Michael Northrop pens a light and funny tale of superhero antics and insectoid battles for a young audience with delightful results. Northrop plays with the familiar and unfamiliar heroes fairly expertly, including jokes on each character’s reputation, and developing a strong impression of character for each one despite the very quick chapters.

A lot of the credit, of course, goes to Brazilian artist Gustavo Duarte, who lends a very strong draftsmanship with an excellent sense of cartooning, leading to a product which is extremely polished but also feels quite energetic and appealing. Duarte gives each character a blend of their classic look (Superman wears his red trunks) combined with newer designs, so they feel like an homage to the past and connected to the present. He also manages to draw an incredibly cute hamster for Hawkgirl! Colorist Marcelo Maiolo, who also works on the mainline comics for DC, gives each page a pastel, bright, and almost colored pencil look, with hatchings, textures, and shadows all throughout. Compared to some of the other DC Zoom and Ink titles, Maiolo and Duarte’s work is much more sophisticated, despite the simple and whimsical nature of the project. Letterer Wes Abbott rounds out the creative team with a very nice selection of fonts and sound effects all throughout, giving a polished and easily readable experience.

The book ends with a quick gallery of the superheroes’ “Secret Files” – ironically more of a Secret Files issue than the recent comics published under that name in the mainline. It also has a cute letter from the author, Michael Northrop, to his younger self. A substantial teaser for the sequel to this book, “Dear Super-Villains” closes out the volume, highlighting a tale from Harley Quinn.

Final Thoughts: A nicely crafted tale of the Justice League which introduces young fans to members of the team both old and new.

Editor’s Note: Dear Justice League is now available wherever books are found. You can order your copy, and help support TBU in the process, by heading over to Amazon.