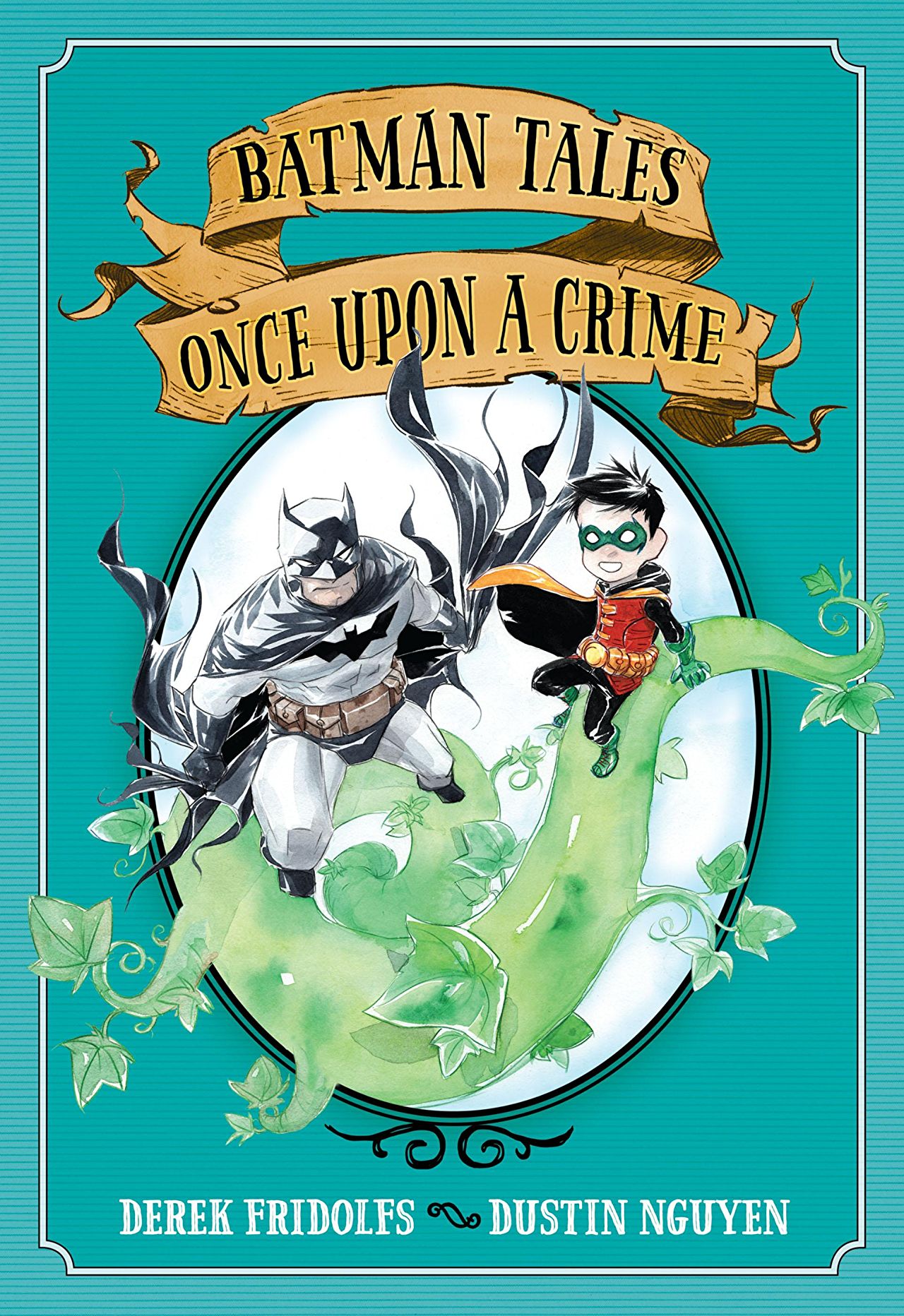 Overview: Return to the world of Li’l Gotham as Batman and friends find old adventures with a new twist, all starting with “Once upon a crime…”

Synopsis Damian Wayne is sick, so Alfred Pennyworth gives him his father’s favorite story of Pinocchio. Distrustful of his father’s taste, Damian flips through the book but falls asleep and dreams a fractured version of the fairy tale – his father and mother (Bruce and Talia) could not have a child. Bruce then makes a wooden puppet named Waynocchio, and he and Talia attempt to bring it to life, first in the Lazarus Pit, then with help from Bruce’s friend Zatanna. Zatanna can only animate the puppet, instead of truly giving him life, and tells him not to lie. Alfred the tiny butler/conscience appears, as does Bat-Mite, the devil on his shoulder. Tempted by Bat-Mite, Waynocchio lies and discovers that his nose grows as a result, but shrinks when he tells the truth. Bat-Mite tempts him to disobey his parents and have fun in the city, using his nose as a tool to climb buildings and get out of sticky situations. Captured by the Penguin, Damian sings on stage, then fights the villains to escape. Meanwhile, Bruce and Talia search for Waynocchio in the Bat-plane. Damian gets lured to a sinister amusement park by Joker and Harley, where all of the naughty children turn into hyenas. Damian attempts to save them but falls overboard from Joker’s boat and is swallowed by a whale. After finally accepting Alfred’s advice and lighting the Bat-signal to call his parents for help, the whale spouts him into Arkham Asylum, where he faces the villains with nothing but pieces of his nose. Fortunately, his parents arrive and save the day, though not before Waynocchio is broken. Zatanna changes him into a real boy as Damian dreams on. Batman comes home, picks up his favorite book from his son’s bed, and leaves Damian after a nice exchange about Batman always needing Robin.

Analysis: Dustin Nguyen and Derek Fridolfs have done it again! Capturing the beautifully watercolor-painted look of their previous digital-first series “Batman: Li’l Gotham,” which was structured around holiday-themed adventures for their chibi-inspired tales, this time they delve into popular fairy tales. First up is a fractured version of Pinocchio, which fittingly enough for the child of a vigilante and assassin, has a rather fractured morality – so much so that Alfred the conscience cricket holds up a sign telling kids not to lie… because the story doesn’t make it quite clear. As usual with these stories, cameos like Nguyen’s co-created villain Jenna Duffy, the Carpenter, the logos on Batman and Talia’s clothes, and Colin the street kid from Streets of Gotham enrich the world immensely.

Story #2: Harley Quinn, Poison Ivy, Joker and Catwoman in “The Princess and the Pea”

Synopsis: A famous jewel is stolen, so Commissioner Gordon and Detectives Bullock and Montoya are on the case. They interrogate the suspects, starting with Harley, who spins a tale of Joker looking for a new sidekick and choosing Two-Face. Her tale includes her payback scheme with Poison Ivy which involves framing Two-Face for the diamond theft by hiding the jewel under his mattress.

Next, Ivy, who claims that they actually hid a spore under Two-Face’s mattress, tells a tale of how that spore grew into a mighty beanstalk, which was destroyed by the Bat-Family, but not before destroying a part of the city and giving everyone allergies. The Joker claims he climbed the beanstalk into the sky and found a Bat-Giant at the top. The police angrily reject Joker’s lies, to which he responds with a fairy tale of the Big Bad Red Hood. In disgust, the police throw Joker back in jail. Baby Doll tells a story of Goldilocks, then Catwoman weaves a tale of her conflicted loyalties, joining the Bat-Family, then running away again to be herself as a thief, though she claims innocence of the diamond. Stumped, the detectives continue searching, while the villains all believe Selina responsible, but Harley has the diamond hidden under her mattress, just like a princess.

Analysis: Instead of focusing on a single tale, as Waynocchio did, this collection strolls through a large number of fairy tales, planting various Batman villains as the protagonists. Nguyen really goes wild with the imagination of the story, and inserts the entire Bat-Family in Joker’s main fantasy, as a treat to longtime fans of Nguyen’s work. There’s even a really nice visual joke connecting to his recent cover to the collected edition A Lot of Lil Gotham, in which Steph appears driving the Batmobile while Katana and Cassandra Cain fight Ivy’s plants. Selina’s story also has a nice nod to the failed wedding in Batman #50, deftly weaving modern continuity humor into the story without requiring kids to know what’s going on. The story makes perfect sense by itself and is only enhanced by knowing what happened two years ago.

Synopsis: Alfred goes mad when the tea is missing. Finding a cup in the Batcave, he drinks it – but shrinks down to the size of a mouse. He then eats some cake and grows so large that he breaks Wayne Manor and causes a flood. Back to his regular size, Alfred rescues Damian’s animals, then floats off to Wonderland, where he encounters rogues like the Cobblepillar, the Cheshire Catwoman, the Clock King (who is late), and finally the Mad Hatter, who has captured the Bat-Family at a mad tea party. Unable to snap his beloved family out of the villain’s control, Alfred jumps on the table, leading the villains in a mad chase, running into the Joker’s court. Cheshire Catwoman attempts to help (as well as steal some crowns), but they are both caught, and sentenced by Red Queen Harley to lose their heads – but Cheshire Catwoman poofs them away with her smile. The king becomes the Jokerwocky dragon, and Alfred runs back into the Mad Hatter’s party, spilling tea over the hats and setting his family free to fight the villains. After they are victorious, the Mad Hatter grows to giant size and vacuums up the world… as Alfred is woken up by Batman in Wayne Manor, having been drugged through the tea, which was from the Mad Hatter’s collection.

Analysis: Alfred’s voice is quite delightful – fussy, but a hint of warmth. Cheshire Catwoman also proves really enjoyable, and like other adaptations such as Tim Burton’s film, serves as an ally to the hero, saving him with her teleportation powers. A funny joke about Scarecrow spiking Alfred’s coffee ends the story, a sort of child-friendly Twilight Zone-style closing sting.

Story #4: Batman and Mr. Freeze in “The Snow Queen”

Synopsis: Batman searches for a man through a wild snowstorm. The Snow Queen appears to Batman, giving him a ride in her carriage and helping him survive the cold. They find the green woman, who does not have the person he seeks in her garden, but has hidden roses because they remind Batman of his lost parents. Batman thanks her for her kindness but cannot stay. As they continue, a crow tells them where to find the man they seek, in an ice palace. Batman overcomes the icy wolf guardians with the help of the Snow Queen, and they find Mr. Freeze, alone and frozen. The Snow Queen kisses Mr. Freeze, and Batman digs him out. The Queen disappears once Mr. Freeze is free, and he and Batman both learn that they must avoid becoming frozen in time by memories both good and bad. They head off together, free.

Analysis: This story is truly told through the art, with much sparser words, and no paneling – it’s a simple picture book style, with hauntingly beautiful images. It also has a really nice message to kids (and adult Batman fans) not to let our memories – good AND bad – from stopping us from moving forward. The contrasting worlds of the Snow Queen and Poison Ivy were incredibly lovely when juxtaposed, as were the characterizations of these two avatars of nature assisting Batman in his quest. Perhaps the best story in the collection.

Final Thoughts: Those of us who collected Batman: Li’l Gotham by Nguyen and Fridolfs way back in 2012-2013, or those who discovered it through the lovely trades or recent collection of the entire series, or even those who enjoyed the Secret Hero Society by the same team, will rejoice that they haven’t lost a beat with this graphic novel. Ranging from zany and whimsical to wistful and sincere, and always beautifully painted by Nguyen, Once Upon A Crime is a worthy addition to the world of Li’l Gotham, and hopefully will lead to many more volumes.