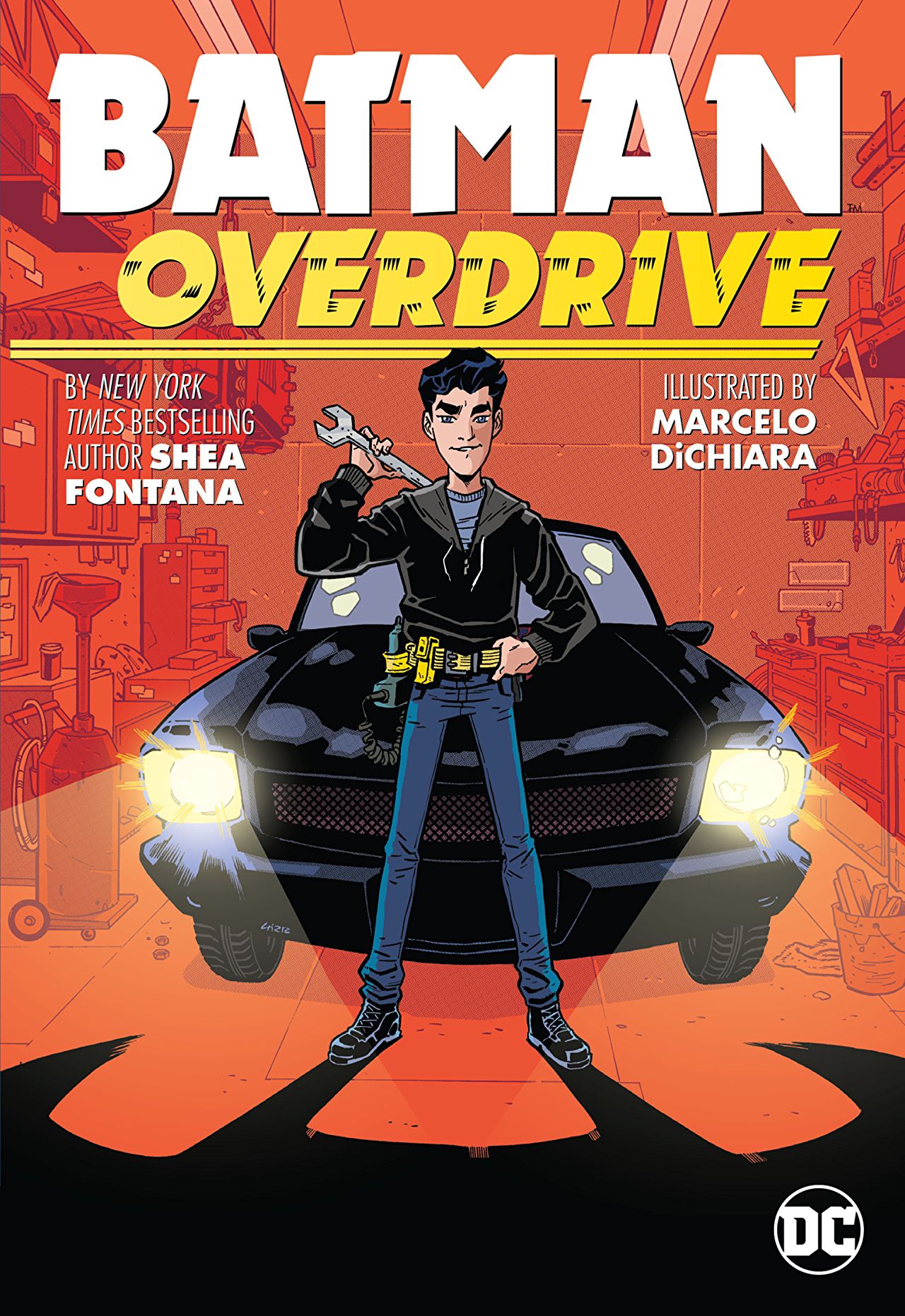 Overview: As he approaches his sixteenth birthday, a young Bruce Wayne looks to leave his mark on his family’s legacy by saving Gotham City, all the while searching for the true person responsible for his parents’ death. And he has a very special tool to help in this mission. He just needs to get his driver’s license first.

Synopsis (spoilers ahead): One month away from his sixteenth birthday, Bruce Wayne has other things on his mind other than getting beat in martial arts training by Alberto Falcone. For young Bruce, he’s longing for the day where he is no longer chauffeured around by his butler Alfred and able to get behind the wheel of his late father’s vintage Crusader. But he has two problems. One, he still have to pass his driving test, and, two, the Crusader was damaged in an accident and is undrivable.

With a month to go, Bruce decides to restore his dad’s car to its original and sets out to a junkyard to find the parts he needs. There he meets Mateo, a kid working for his uncle who offers to help find the things Bruce needs and restore the Crusader (as long as Bruce allows him a ride in the vehicle once it’s restored). Before they can get started, they’re interrupted by a “cat” burglar stealing parts for herself. As they give chase, the thief jumps behind the wheel of a sports car with an accomplice and they take off. As Bruce stands dejected, Mateo pulls up in a ride of his own. The duo gives chase.

It doesn’t take long but Bruce and Mateo catches up with the thieves. Before they can get a clear picture of them, however, they’re run off the road and taken out of the chase. Bruce, however, finds useful evidence and the two heads to Wayne Manor to analyze it. There, Mateo meets Alfred for the first time and lays his eyes on the Crusader. He immediately comes up with ideas for custom additions to the vehicle, but Bruce is adamant that the Crusader is restored to its original form. As they go to look under the hood, a bat flies out, startling both of the young men.

While on a stakeout, Bruce develops a new mission as a crime fighter. His first mission is to find the true person behind his parents’ death. He takes off to find further evidence on the Falcone family. Later that evening, Bruce and Mateo sneak out to find the car burglars from the other day. They catch up with the vehicle as the police are giving chase. Bruce and Mateo take cover in a parking garage where they are noticed by another member of the crew acting as a look-out. To distract them she sets off a car alarm and takes off. Bruce catches up to the assailant only to realize he recognizes her – it’s Selina Kyle, one of his martial arts classmates.

The next day, to Alfred’s surprise and glee, a new member has shown up to Team Wayne as Selina heads downstairs to the “car cave” to help restore the Crusader. That evening, however, Bruce and Mateo are out crime-fighting again. This time, Bruce is looking for more evidence to tie the death of his parents to the Falcone crime family. As he fumbles through file folders, he stumbles across a familiar name – A. Pennyworth. Did Alfred play a role in his parents’ death? Before he could dive deeper into the folder, he passes out. The room is rigged with knockout gas. Lucky for him, Selina is there to make the save. As Mateo leaves, Bruce and Selina make a connection.

It’s now less than a week before Bruce’s birthday and the restoration of the Crusader is coming along nicely. Bruce even allows some “modifications” to be made. Later, as Bruce walks Selina home from practice, the connection they recently made is now fractured when Bruce realizes that Selina has stolen from him. He tells her goodbye.

Back at the manor, Bruce and Mateo are placing the final touches on the Crusader. Mateo adds one final touch – a shiny, silver bat to don the front of the car. Bruce loves it. Bruce’s target for the night is the underground train station now garage hidden under the Falcone Home for Orphaned Girls. This is where the stolen vehicles are being shipped out of Gotham without notice. Bruce takes off before Mateo can join him. At the chop shop (conveniently named Chop’s Shop), Bruce finds a photo of Alfred and Carmine Falcone, the head of the Falcone crime family. He’s suddenly attacked by Chop, the gang leader and the other car thieves, which he calls his Gotham Girls. Mateo, listening on comms does his best to help Bruce to no avail. He leaves the manor in an attempt to rescue his friend. Bruce is able to escape, however, and as he drives off in the Crusader, he crashes in Matteo. Bruce leaves Mateo at the scene, disappointed in what he’s learned about Alfred.

Bruce confronts Alfred about his connection to Falcone. Alfred admits to his past transgressions, but denies having any part in the death of Thomas and Martha Wayne. Despite having a reason for not being there when they were murdered, Bruce fires Alfred and asks for his keys to the manor. The next day, Bruce’s birthday, Bruce finds himself alone. He heads to the DMV where he passes with flying colors. As he fumbles through the vehicle’s paperwork, he realizes that the car was actually Alfred’s gift to Thomas Wayne when he turned 16. This doesn’t phase Bruce. Bruce ignores calls from Mateo, who leaves a message confirming that Alfred had nothing to do with his parents’ death. Bruce returns to the manor to look for Alfred. He finds out that not only has he left, but he’s been taken. The car cave has also been cleaned out of every vehicle. Bruce springs into action. He finds Mateo and gives him a costume to wear. They then head to Chop’s Shop to rescue Alfred. As they spring into action, they find Selina (who was initially a member of the Gotham Girls) tied up. He frees her while Mateo knocked out the Gotham Girls using knockout gas. As Bruce helps Alfred, Selina, and Mateo escape, he faces Chop (now identified as Alberto Falcone) for what would be the final battle.

Bruce chases Chop through the streets of Gotham. The car chase takes them through the abandoned subways, across the Gotham Gate Bridge, and into the hills. There, using some nifty maneuvering with the assistance of Alfred and some additional modifications to the Batmobile courtesy of Mateo, Bruce causes Falcone to crash. The final hand-to-hand battle begins. Each combatant gets their fair share of shots in on the other and as the police approached, Bruce takes out Falcone with one hard shot. As he cuffs Alberto to the car, Bruce realizes he’s trapped on the road as well. Will they figure out his identity? What can he do? Luckily in the distance, he sees Alfred approaching in the family helicopter. They load up the Batmobile on a flat and they make their escape, just in time for Bruce to enjoy some birthday cake.

Analysis: The last time I was exposed to Shea Fontana’s work, she was on an arc of Wonder Woman not too long after Greg Rucka had finished his Rebirth run. Before then, I had not read any of her work, but I knew of a bit of it, particularly her long run on DC’s Super Hero Girls. I figured her exposure as a writer for children’s books (she’s also done animated shorts) would make for a good read from the perspective of a child.  I was wrong because this OGN is a good read for readers of all ages and it can be seen from several points of view.

The first thing that should be clear is that this is a book meant for young readers. This can’t be more evident than with the primary characters; they’re all youngsters. Bruce, Selina, and Mateo are clearly teenagers. While it’s not explicitly said, one can assume the secondary characters, Harley, Ivy, and Shiva, are of similar age. The more tertiary characters, to an extent Alfred and Alberto, have little to no dialogue. Carmine Falcone, for example, said no more than about twenty words in the entire graphic novel. This should allow young readers to relate to the characters in an easier fashion.

There is good dialogue and pace throughout the book. Understanding who her audience is, Fontana doesn’t inundate pages with a ton of words and because of that, lets the art fill in the gaps, allowing the reader to flow through the book in comfort and ease. Comparing this book to the last graphic novel I reviewed for the site, Batman: Nightwalkers, this book was much more easier on the eyes. This is not meant as a knock against Nightwalker, as that was meant to be a darker story (being adapted from a novel).

One may ask why this graphic novel is good for older readers as well as young readers? What older comic readers will see is a decent homage to the ethos of the Batman universe and Fontana accomplishes this through her experience at DC Comics. So while Harley Quinn isn’t running around with her mallet or ultra pale skin, you notice the trademarked colored pigtail tips. Shiva is wearing her traditional black and red. Ivy wears her green and has her plants. By the end of the book, Bruce is called Batman. It was interesting that Jack Percy replaced Joe Chill as the murderer. Outside of this and a few other items, however, Fontana does a decent job of staying true to how Thomas and Martha Wayne met their fate. Bruce still has a bat-computer and a ton of money that allows him to have some nice gear and gadgets (What does a sixteen-year-old need with a Kelvar suit and a grapnel gun anyway?).

There’s not much to say about the art. This doesn’t mean that it’s bad, but there’s nothing special about it. Nothing stands out. As stated previously, the art does a decent job of filling in the holes with the actual dialogue, allowing the reader to move through the pages without having to guess what might be going on. I will credit Hilary Sycamore’s colors, which were bright even with the dark scenes. While I might have some concern with things being too bright and vivid even in darker scenes, it works here simply because of who the audience is.

Final Thoughts: Shea Fontana was the perfect fit for this book. Her experience in writing children-aged books along with her exposure to the comic industry allows her to bring to life a Batman story for any young reader while still paying homage to the ethos of Batman and his universe. It’s a story that any parent should feel comfortable reading with their children or for themselves.