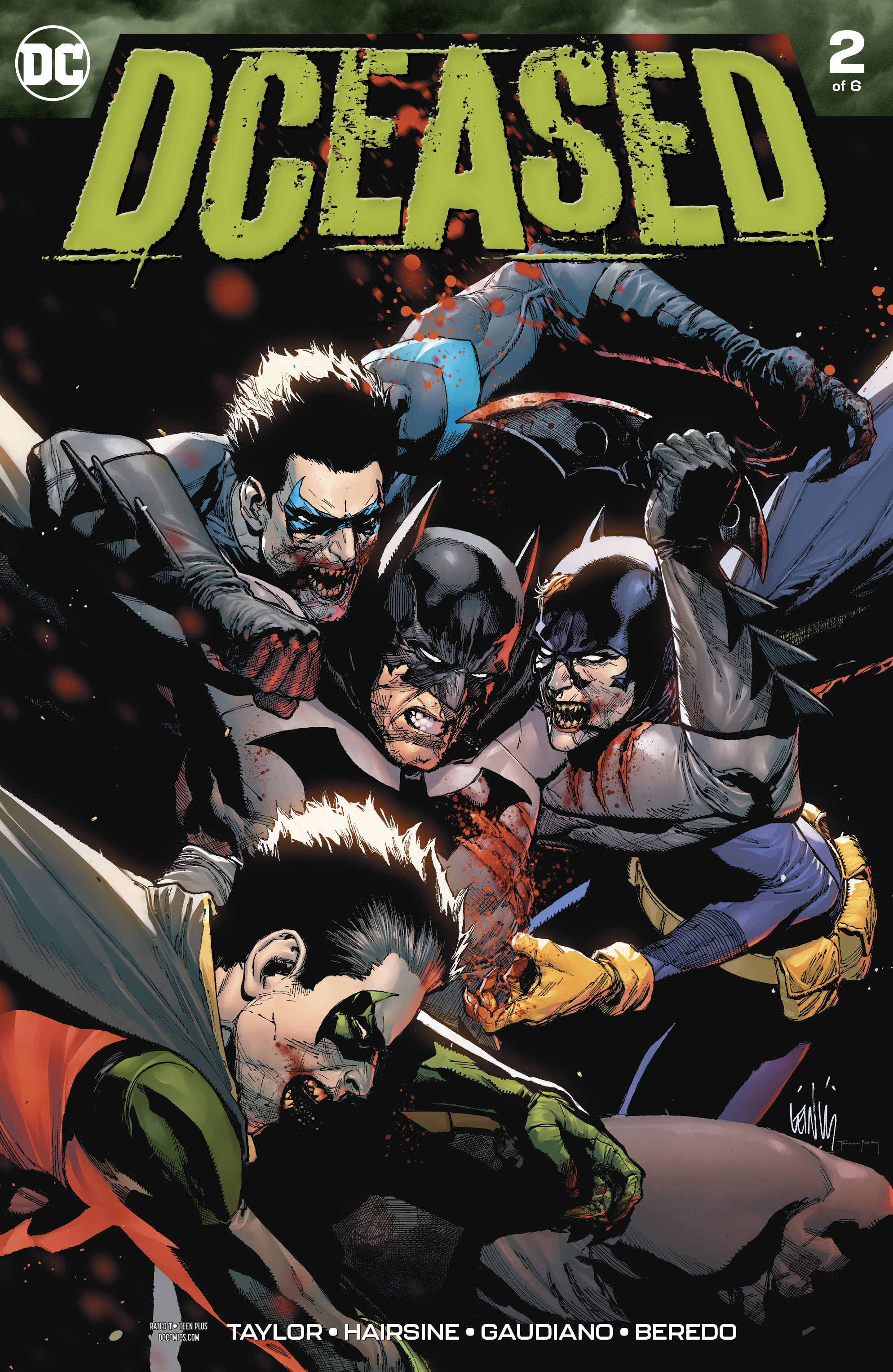 Overview: Dinah now wields the most powerful weapon in the universe, and Alfred says his last goodbye.

Synopsis (spoilers ahead): At first, the heroes were isolated, hiding from the infected world. They had no clue how far the horror reached. The narrator closes by saying they would learn soon enough.

Aquaman walks aboard a rundown cargo ship wondering if there is anyone onboard. After walking around a while, he hears a sound coming from inside one of the rooms. He opens the door to find a hoard of zombified people attacking each other. When they notice his presence, they run after him. The only way for him to escape is to dive overboard into the ocean.

In Lois’ and Clark’s apartment, Jon and Damian look upon a burning Metropolis skyline. Jon tries to reassure Damian that Batman will be okay. In the living room, Lois confirms her mother and father are safe. Clark says he needs to go to Smallville if he is not needed here. Lois tells him they need to go to the Daily Planet first. They need to find a way to communicate to the rest of the world. They need to find other survivors.

In an alley in Gotham, Harley tells Ivy this idea is awful. In fact, she is going to record this in her scrapbook. As she tries to scurry away, Ivy uses a vine to stop her. Harley knows what has to be done, but she does not want to go into the building alone. Ivy kisses her and says she is strong enough to face her monster. Harley walks into the building and sees the Joker staring into a group of televisions. Harley tells him their relationship is over. The Joker turns around with a zombified smile.

Outside Metropolis, Dinah Lance, Oliver Queen, and Hal Jordan sit in front of a campfire enjoying a wonderful evening in nature. Hal tells the group he absolutely hates camping, and he cannot believe how they convinced him to come. He is known throughout the galaxy for the strength of his will. Oliver jokes he is going to tell the universe of his weakness. Dinah tells Hal they just saved the world from Darkseid’s invasion; they earned the right to take the night off. Hal heads to his tent and checks his phone. With a scream, Hal explodes with green energy. Enslaved by the Anti-Life equation, Hal tries to kill Dinah and Oliver. Oliver shoots him with a boxing glove arrow, but this has no effect. Before Hal’s constructs can kill them both, Dinah screams as loud as she can at Hal. He falls to the ground with blood coming from his eyes, ears, and nose.

Clark and Jon fly Lois and Damian to the Daily Planet. Lois says the Daily Planet has an old analog television system and a radio station. If they get these up and running, they can get information and talk to whoever they can. Before they enter the building, Clark stops the group. The building is filled with zombies. Clark hears something in the distance and tells the group to stay put.

With Hal’s death, his ring searches for a new host, and it goes to Dinah. Since she has shown she has the ability to overcome great fear, she becomes the new Green Lantern for Earth. She tells Oliver she does not want the ring, but Clark floats down telling her they are going to need it.

Back at the Daily Planet, Lois tells the group they have made contact with Batman. He tells them these infected people are not zombies. They are spreading death and stealing life. They are Anti-Living, and the trigger is the Anti-Life Equation. Batman tells them he does not have much time for he has been affected. He is using Freeze’s suit to help stave off the infection, but he will give into it soon. Before people can get sentimental, Batman tells them it is a technological/biological hybrid. To save the world, they will need to destroy all human carriers. There is not much more for him to do, or it may be his mind will not let him.

Damian calls out to his father, and Batman tells him Alfred has a box for him. He is sorry he could not give it to him in person. Just as he says those words, the virus rears its head and Batman now part of the Anti-Living. Alfred tells the computer to end the transmission. With a shotgun in hand, Alfred tells him he is sorry.

The Batcave echos with a loud bang and all is silent once more.

Analysis: Wow. I was a little hesitant with this issue. I felt the first issue was good, but you might not know if the story is heading in a good or bad direction. Just in case it is not clear: this story is amazing.

I love how Taylor writes Dinah and Oliver. You can see his love for these characters in Injustice, and he brings that love to this series as well.

Dire circumstances call for dire actions and no action as more dire as Dinah’s scream. It is said the Green Lantern rings are the most powerful weapons in the universe. With one of the greatest Green Lanterns of all time wielding the most powerful weapon of the universe, you can understand why Dinah would be scared for her life. She killed her good friend and had no time to grieve.

Let’s talk about the saddest part of this issue: the death of Batman. Oliver made a point that this is not how Batman should end. We have this belief that Batman can do anything and beat everything. He cheats death more than everybody in DC. The great Batman dies to a virus. What is even more unbelievable is his solution: kill all infected. Batman has no plan. What do you do when Batman cannot figure it out?

His final moments with Damian are sweet. To quote Brad Pitt’s character in the movie Seven, “What’s in the box?”

I am so sorry for Alfred. No one can possibly understand the pain of losing a child. It is unfathomable for one to kill their child because they are now Anti-Living. The saddest moment in this comic is Alfred’s last moment with his son.

I have a suspicion Lois is the narrator.

The art in this issue is wonderful. It has this gritty vibe that reinforces how dark and dire the world is. This art team is perfect for this title.

Final Thoughts: Tom Taylor pulls no punches. This series is akin to The Walking Dead or Game of Thrones: none of the heroes are safe.