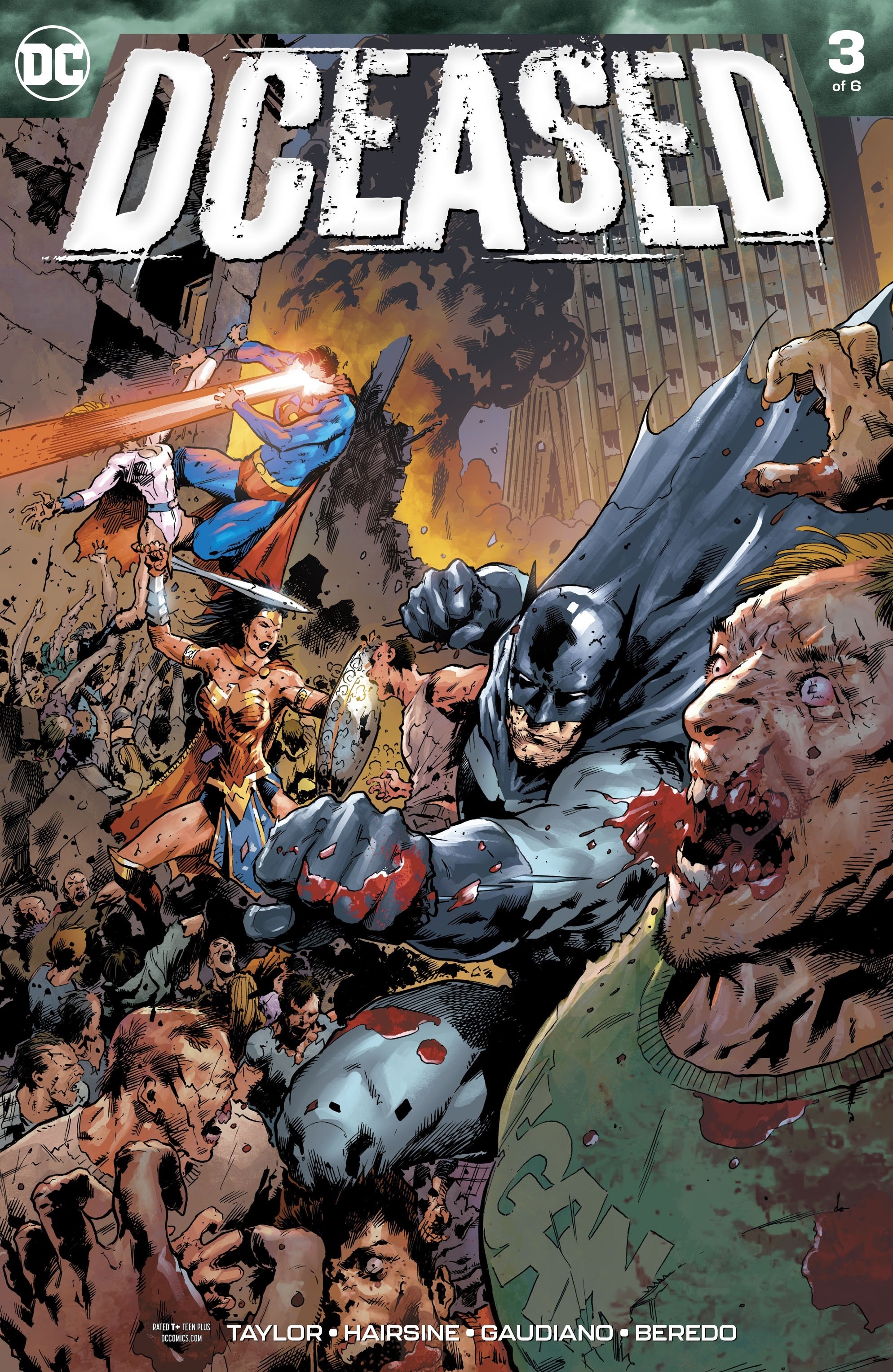 Overview: The heroes take a moment and acknowledge their losses.

Synopsis (spoilers ahead): Before Alfred’s feet, lay his boys. Bruce, Dick, and Tim, once boisterous and alive, rest on the cold floor in a pool of their own blood. Moments before, Alfred told his undead sons one final goodbye, and then shot them in the head. Solemnly, Alfred walks to Batwing and flies out of Gotham.

Harley runs out of an exploding building with the undead Joker in tow. A man with a shotgun is overtaken by a group of undead and drops his weapon. Harley collects it and shoots the Joker in the stomach. As she walks away, she is greeted by the Birds of Prey. Unfortunately, all the members are undead, and Harley must kill them to survive.

At the Daily Planet, Jon sits by Damian and tells him he is sorry for his loss. Damian says he does not want to talk about it. Jon offers to just sit with him instead. Across the rooftop, Lois, Clark, Oliver, and Dinah discuss if Damian is going to be okay. Clark tells Lois he has to go home, and he will secure the building first so Lois can get the Daily Planet’s radio system is up and running. Clark goes through the building and removes the undead. They used to be his colleagues and friends, but today they are just the infected. He goes back to the roof and tells his wife and son goodbye before he heads off to Smallville. Before he leaves, he asks Oliver and Dinah to protect his family.

In Atlantis, Mera and Garth try to keep the undead away. It was getting darker, and it was not because of the sun. Mera points out there is a bunch of blood in the water. This is because of Arthur gutting the people who followed him from the boat. Because of the infected blood, Arthur has become undead as well. Garth is exposed to the blood and is infected. Mera uses her powers to drive the infected away and swims away from the area.

On his way to Smallville, Clark is distracted by the calls of people who are attacked by the undead. He saves a man from a mob of the undead, he rescues a school bus and stops an infected Clayface. Jefferson Pierce (Black Lightning) also helped stop Clayface and Clark told him to take his family to the Daily Planet.

After arriving in Smallville, he greets his mom and learns his undead father is locked away in the barn. He goes inside and looks at him. He dodges his father’s lunges, then locks him away in the basement. He leaves the barn, telling his mom it is time they leave to go to the Daily Planet.

Analysis: Tom Taylor really pulls at your heartstrings in this issue.

This issue starts with Alfred looking down on Bruce, Dick, and Tim. He had to put down his family. I could not imagine what he is going through. He had to kill his sons. All the members of the Birds of Prey are undead. The Damian/Jon moment was incredibly touching. I like how Jon offered to just sit with him. Sometimes, we just need people to be there for us when times get tough. Jon was there for him. And, Clark had to lock away his father.

A lot of things happened in this issue, but the plot did not really advance. I think that is alright. So much has happened in the previous two issues, that Taylor needed to take an issue and unpack all that is going on. The world has fundamentally changed, and the heroes have to adjust to it.

I really enjoyed the art. In fact, I think this is the best issue the creative team has done. The pencils, colors, and lettering are collectively at their best in this issue.

Final Thoughts: Plot-wise, this issue did not introduce anything new. However, this moment is filled with man emotional beats with these characters and I loved it.