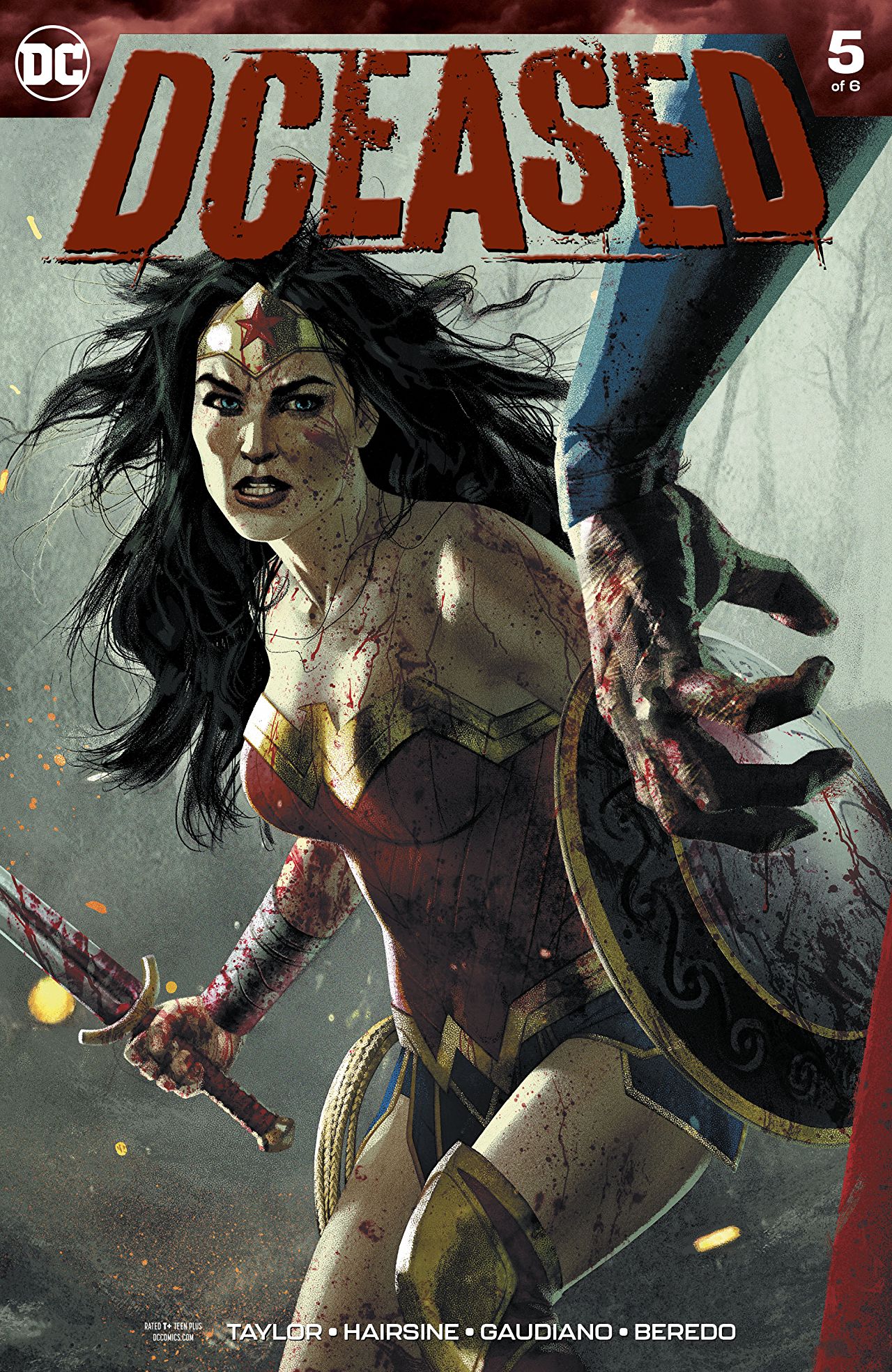 Overview: All hope is lost when two of DC’s most hopeful and inspirational characters have died.

Synopsis (spoilers ahead): Diana and Clark wait for the dust to settle, and they are horrified. Metropolis is gone. There are no structures standing, and everything has been obliterated by Captain Atom. Thankfully, Dinah uses her Green Lantern ring and protects all the survivors on the roof of the Daily Planet. Lex Luthor appears from the rubble, and Superman threatens him if he had anything to do with this extermination of Metropolis. Luthor says their city is gone. It is time to have a truce.

Over the next few days, the heroes took down the internet. Barry decommissioned every data center, Diana took down every satellite, and Clark cut every undersea fiber optic cable. Now, the only way the virus can spread is through direct contact.

The heroes set up two sanctuaries – two places where they believed the virus could not reach. Diana asks her mother if Themyscira can become a refuge for the survivors. Even though men have never set foot on Themyscira, it is time for that policy to change. It is the Amazon’s duty to help the world. After having Hippolyta’s blessing, Diana, Mera, and Clark lifted the seafloor around the island, thus extending Themyscira’s landmass. The other sanctuary is the Gotham jungle. This is the section of Gotham Poison Ivy and Harley lived in. Dinah, Oliver, and Damian arrive at the jungle and are immediately attacked by an undead Killer Croc. Thankfully, one of Poison Ivy’s plants impaled Croc. However, the plants also tied up Damian and Oliver. Damian tells the group to not harm the plants, and Ivy agrees. Ivy asks what they are all doing here and why there is a little Batman. Damian says Batman died, and Harley and Ivy give their condolences. Damian goes on to say they are looking for a sanctuary for survivors and asks if people could stay with her in the jungle. As long as people do not harm the plants, then they can stay. If not, they are fed to the monsters.

The Fortress of Solitude was set up as a new information hub and hall of heroes. Luthor and Victor are working together to develop arks. These arks will fit seven million people. Clark says they are not leaving this Earth. Luthor says they must leave if humanity is to survive. He then taunts Clark by saying he has now lost two homeworlds in a lifetime. In response, Lois punches Luthor in the face. If he talks again to Clark, she will break his jaw.

Over the next few weeks, the heroes located survivors and brought them to the two sanctuaries. They also began building arks. For the first time, they were able to grieve. They felt like they had control of the situation, but they did not. They made a huge mistake by bringing all the heroes together. They heard a buzz in their minds which turned into a scream. Out of nowhere, something killed Luthor. They realize it is an undead Martian Manhunter. Firestorm kills Manhunter, but the heroes realize something else is wrong. Barry is infected and he has gone. The fastest man alive is now spreading the virus all over the world at an incredible rate. Clark stops Barry, but unfortunately, a piece of Barry punctured Clark’s skin. He is now infected.

Clark has more time than most before he turned, so he came back to the Fortress to tell his friends and family goodbye. He then left the world, hoping that he would starve himself of oxygen before the virus could take hold.

Analysis: Tom Taylor is a jerk. Not really, but can these heroes just for once get a break? I have to say Taylor is a genius. He gives readers a bit of hope then takes it away. He just pulls at your heartstrings. Two of DC’s most hopeful heroes are dead. What are the survivors supposed to do? I have no clue how this is going to end.

I felt the Ivy and Harley moment with Damian was sweet. Although Harley and Ivy have been foes of Batman in the past, they still respected him even though he was trying to capture them. That was a good moment.

Another good moment was when Lois punched Luthor. Then she cussed him out and threatened him. It was one of those moments we have all been wanting to see for ages now. You know Lois is tired of Luthor harassing her husband and has wanted to beat the snot out of him. And she had her chance in this comic and I loved it. That is the highlight of the issue.

I wish I had more to say about the art, but I do not. It is perfect. I feel that the art has not regressed as this series has progressed. Taylor writes emotion but Trevor Hairsine makes you feel the emotion. This is one of the few comics where I felt what the characters were feeling, and Hairsine was a big contributor to that

Final Thoughts: This is another great, yet tear-jerking issue by Tom Taylor.