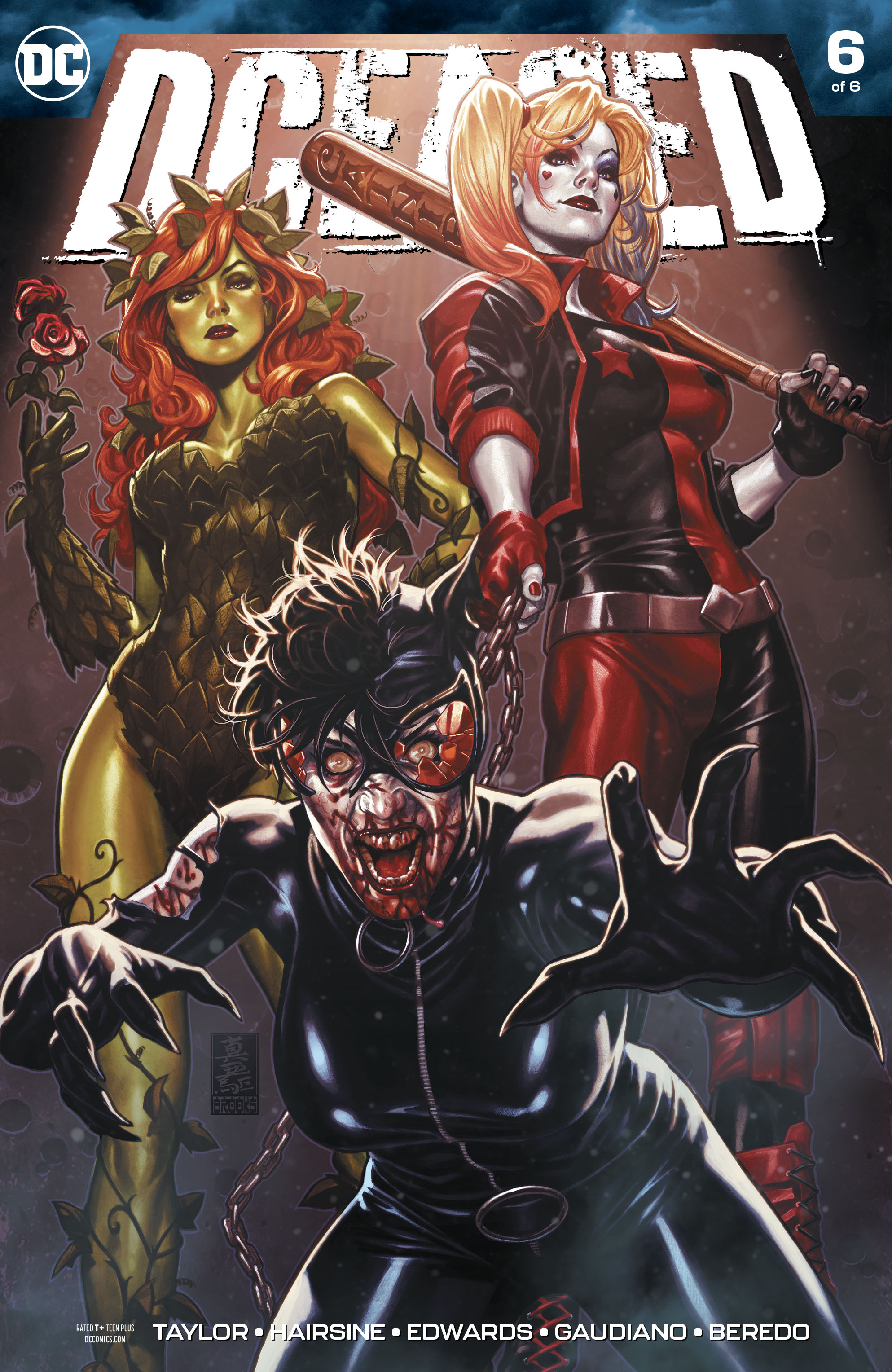 Overview: Humanity makes a daring escape to a new planet.

Synopsis (spoilers ahead): Survivors in New York City see the Man of Steel fly above their city and have a sense of hope. Superman, the best of humanity, is there to save the day once again. However, this Superman is just a shell for anti-life. This undead Superman obliterated the largest skyscraper in New York.

In the Fortress of Solitude, Cyborg suggests since Superman is now undead, then hope is lost. They must leave this Earth. However, they realize the only obstacle they face is Superman. He has the power to destroy both arks. They must stop Superman. Damian pulls out a piece of Kryptonite from his utility belt and suggests they use it. Batman had contingencies in place in case any member of the Justice League were to turn evil. Oliver makes a comment on how Bruce does not even have to be alive to scheme against them. Damian hesitantly says Bruce did not plan for Oliver. Now upset since Bruce did not have a contingency plan, Dinah (sarcastically) reassures him that he can be a planetary threat as well.

Alfred alerts the heroes Bruce planned to weaponize the Kryptonite into gas and disable him with it. Diana says this will not be enough to stop him. Bruce built his non-lethal contingencies. With an undead Superman, only a lethal strategy can stop him. Clark is both weak to Kryptonite and magic, so she will fuse the two and make a weapon strong enough to kill the undead god.

Diana takes Dinah and Victor to confront and ultimately stop Clark while the rest of the heroes get into the ships and head to Ivy’s jungle and Themyscira to evacuate survivors.

Ivy and Harley help the evacuees board an ark, but decide to stay behind. Ivy will not leave the Green, and Harley cannot leave her love.

On Themyscira, the evacuation process is near completion. Towards the end, a storm hurriedly heads inland. Mera says it is a storm. Riding a Kraken and commanding an army of undead Atlanteans, an undead Arthur attacks the Amazons and tries to stop the evacuation. The heroes continue helping passengers board while the Amazons go to give them time. Although they have trained for centuries for any type of warfare, they were unprepared for the undead. One by one, Amazons begin to fall. Not only did the remaining warriors have to contend with the Atlanteans, but they also had to fight their now undead sisters.

On the other side of the planet, Diana, Dinah, and Victor face off against Superman. Dinah creates a megaphone construct, which vastly increases her Canary Cry, and screams, forcing Superman to his knees. Oliver radios the team and says the arks have left Gotham and Themyscira; they have done their job in keeping Superman busy. Diana uses her Kryptonite infused sword and cuts off Superman’s arm. In response, Superman punches through her chest, mortally wounding her.

Diana gives her sword to Dinah and says Superman has seen the arks; Dinah must go stop him. Victor stays by Diana’s side, and Dinah flies to space.

Onboard the arks, Jon realizes Superman is heading their way, and he is their only hope. He tells Damian to look out for his mom and gives his friend a hug. Jon tells Lois goodbye and flies to meet his undead father.

Jon stopped Superman for a few seconds and then was quickly knocked out. Thankfully, those few extra seconds allowed for the Green Lantern Corps to surround the arks. Superman looks at the Lanterns and decides he could not take them on one by one. He flies into the sun, draining it of all power. He has doomed the entire solar system to die.

The Corps escorts the arks to their new planet.

Diana died from her injuries and is now undead. Victor uses the lasso of truth and compels Diana to tell him if there is a cure for the anti-life. She says there is, and it is Victor. Victor, now stunned, decides he must warn the arks – their planet can be saved. While deep in this thought, Diana rips Victor’s head from his body.

She looks at the fallen lasso and comments that the only truth is death – death is forever.

Analysis: This has been such an awesome read. What a great mini-series! Tom Taylor did a masterful job at writing. He was able to write a story about zombies and make it personable. In many ways, he took inspiration from his Injustice work and applied those principles in DCeased. There was a myriad of characters, and each had their own distinct voices. Most importantly, he was able to capture the essence of each character perfectly.

I had a feeling Lois was the narrator this whole time. It either was her or Alfred. Knowing how Clark died, it made her narration even more powerful. She is writing a first-hand account of how her husband and her planet died.

The art team of Trevor Hairsine, Neil Edwards, Stefano Gaudiano, Rain Beredo, and Saida Temofonte produced some of the best art of this series. There was so much going on, and each panel was entirely consistent. I have no complaints about this magnificent issue.

Diana’s last words are haunting! Not sure if I agree, but I cannot think of a reason to disagree. The universe is heading toward maximal entropy (substantially pure chaos). There are national disasters, wars, shootings, suicides, etc. claiming lives every day. In a world of with so many broken things, how do we live? I think this is why we love stories. Stories can live after we die. Think about the Iliad and the Odyssey, two stories many read in high school and university, and they were written sometime around 1260 BC – 1180 BC. We can dive into a good story and escape from the pain in our lives. I feel that is the point of superheroes and comics: we read about heroes like us conquering their obstacles, which gives us the inspiration to fight on. One of my favorite quotes from Tyrion in Game of Thrones is, “There’s nothing in the world more powerful than a good story.” Our stories will live forever – even after we die.

Overall, this is a beautiful series. I could not recommend it highly enough.

Final Thoughts: For a story so grim, I laughed pretty hard at Oliver’s reaction to Damian saying Bruce did not have a contingency plan for him. For an ego like Oliver’s, this probably stung. There are sometimes jokes about Oliver Queen being a poor man’s Bruce Wayne. Even Bruce thinks he is not dangerous enough to take seriously.