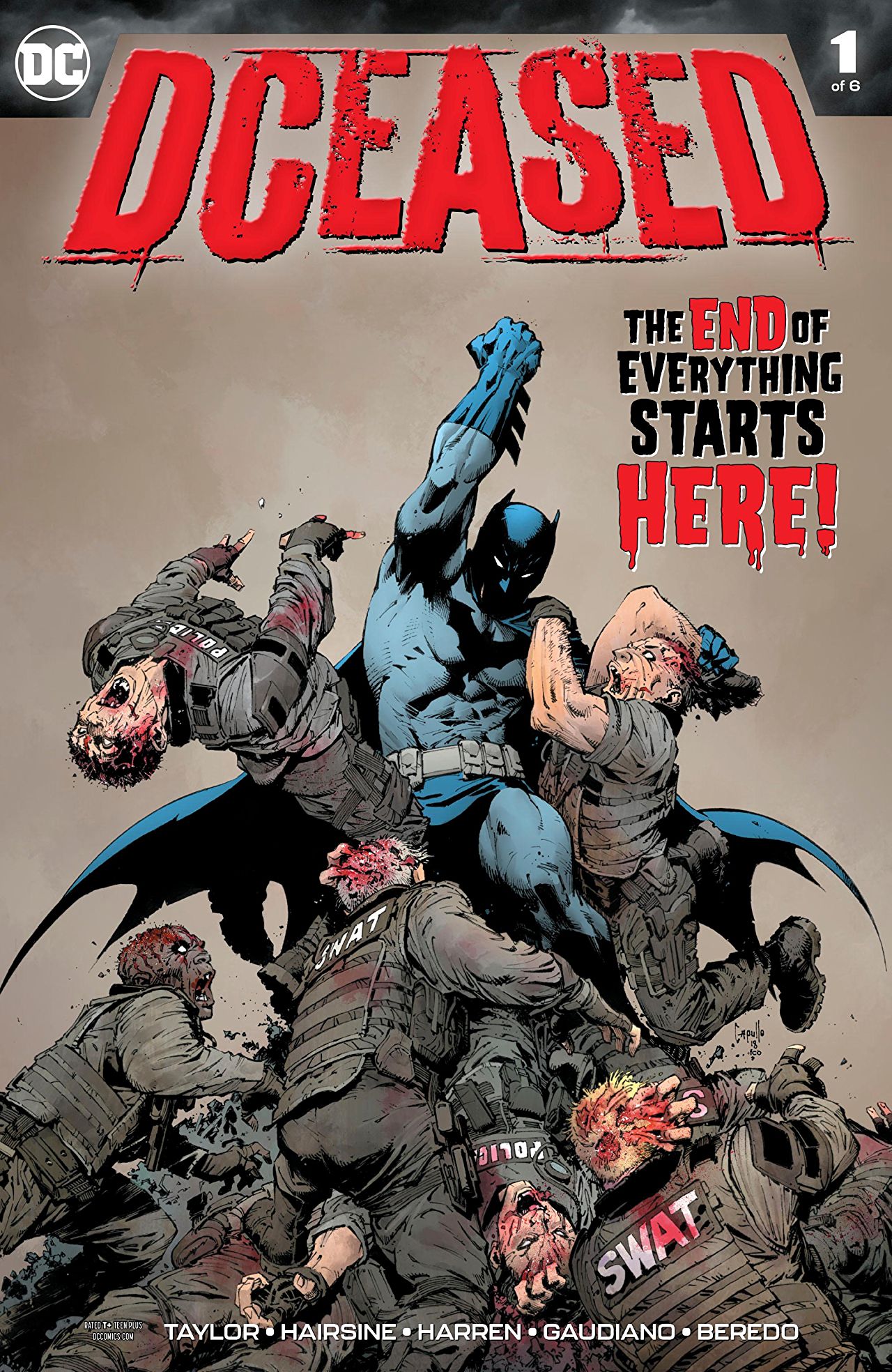 Overview: After repelling with Darkseid’s invasion, the Justice League responds to an even greater horror: people worldwide are enslaved by the Anti-Life equation, effectively rendering them to mindless zombies.

Synopsis (spoilers ahead): His mother told him there were no such things as monsters. There was nothing ever hiding in the dark. Nothing was ever going to jump out of the shadows. He wishes he could have told his kid the same thing. But by the time he was grown up, he had seen too many monsters. They were real.

The narrator continues and shares how he heard something akin to thunder. But, this was the sound of Superman breaking Darkseid’s jaw. His invasion lasted a week, and the Justice league repelled his army. This moment was the Justice League’s finest hour, but it also was their last.

Superman and Batman command Darkseid to never return, and Wonder Woman uses her lasso to make him repeat what they are saying. Darkseid tells them he will not return because he has what he needs. And with that, Darkseid boom tubes away.

Confused, Green Arrow and Black Canary ask the League if they knew what Darkseid was referring to.

Batman receives an alert; Cyborg is missing. He confirms Cyborg is not on Earth. Flash asks how he knew this, and Batman confesses he placed a tracker in one of Cyborg’s subroutines. Unbeknownst to Cyborg, Batman’s tracker can track him anywhere within a two-light year radius. He confesses that Cyborg is a walking Apokoliptian weapon, and it would be irresponsible if they did not keep track of him. Flash and Green Arrow question Batman’s decision, but Wonder Woman asks for them to put the issue aside until later. Cyborg’s safety is the upmost priority.

On Apokolips, Desaad has Cyborg crucified on a table awaiting Darkseid’s return. Desaad informs Cyborg he has the other half of the Anti-Life Equation within his mother box. Desaad shares that this equation, Darkseid’s obsession for ages, will be the end of all free will. He who controls this equation controls life.

Darkseid enters Desaad’s lab and lays his mother box, with his half of the Anti-Life Equation, onto Cyborg’s chest. Despite Desaad’s warning of mixing the Anti-Life Equation with physical and digital parts of the host, uses his mother box to summon the Dark Racer, the harbinger of death of the New Gods. Darkseid merged his half of the equation with the half in Cyborg modified with the Racer’s blood.

Immediately, Darkseid begins to scream. The Anti-Life Equation, now corrupted with a piece of death, has enslaved Darkseid. Desaad, seeing what has happened, tried to send Cyborg away, but it was too late. In his suffering, Darkseid jumped into the fire pits of Apokolips, and Apokolips blew up.

Now back on Earth, Cyborg’s system automatically connected online. The Anti-Life Equation began to spread itself as a techno-organic virus. It attacked through social media, infecting all those who saw it. The infected tried to claw this virus out of them, but it was too late. Those infected were now enslaved.

At the home of Scott Free and Big Barda, Superman thanks the two for willing to go back to Apokolips and save Cyborg from the clutches of Darkseid. In the middle of their conversation, Superman hears the screams of the infected. He rushes outside and sees they mayhem. His first thoughts are about Lois and Jon.

In Lois and Clark’s apartment, Damian and Jon, while playing video games, argue about who is going to help Lois find her phone. Jon reluctantly agrees and goes to retrieve. With the device in hand, Superman blows up the phone and then the television. He has saved them from the virus. Lois asks how they can help, and Superman tells her he needs to assemble the Justice League. Damian lets them know he cannot reach his father on his communicator. Lois comforts him and lets him know if anyone can intimidate a super-virus, then it would be Batman. Batman is not really social, so he will be okay.

Batman asks the Batcomputer how many people could be infected, it responds an estimated six hundred million people are infected. The virus can be transmitted either via bodily fluids or technology. It alerts him at this exponential rate, it will be able to spread to all internet controlled devices and billions would be infected. He asks the computer if he still has a connection to the internet. The computer responds they are still on the grid, and Batman commands for an EMP pulse to go off immediately. All electronics in the manor and cave are disabled.

Batman looks for Dick and finds him and Tim in the kitchen. They are both infected. Reluctant to hurt them, Batman tries to reason with them. However they are infected, and they want to eat him. They gain the upper hand, and scratch and bite his flesh.

Analysis: I love me some Tom Taylor. I first heard of Tom Taylor when he started writing the Injustice comic. It has been a joy to read through that series. He has a great voice for many of the DC characters. I think this mini-series will be a big hit for DC. With it being an out-of-continuity story, Taylor has more latitude to take risks than otherwise.

Darkseid has always been after the Anti-Life Equation. The best way to describe this equation is it provides a mathematical proof that life is meaningless. Basically, this equation removes free will from individuals. This equation can be spread via the internet. Tom Taylor is borrowing the basic concept of Final Crisis, Darkseid plans to use the Anti-Life Equation to enslave humanity. I thought it was interesting the second half of the equation was in Cyborg’s Mother Box. We have always viewed his Mother Box was benevolent. But, Batman was correct to be worried about him.

I was surprised to see the Dark Racer. At the moment before a New God dies, the Dark Racer collects them and takes them to the afterlife. The Anti-Life Equation and the piece of death merged together creates a virus where people are essentially “the walking dead.” They have no free will. Cyborg’s unique biology can allow the virus to spread via the Internet and person to person.

I thought the moment between Lois and Damian was sweet. I forget Damian is a middle schooler, and he can worry. I also love the reasoning Batman will not succumb to the virus is because he is Batman; his broody, anti-social nature is his greatest strength in this story.

Final Thoughts: It is the beginning of the apocalypse for the DC Universe. I wonder how the Justice League can ever beat the army or the undead?