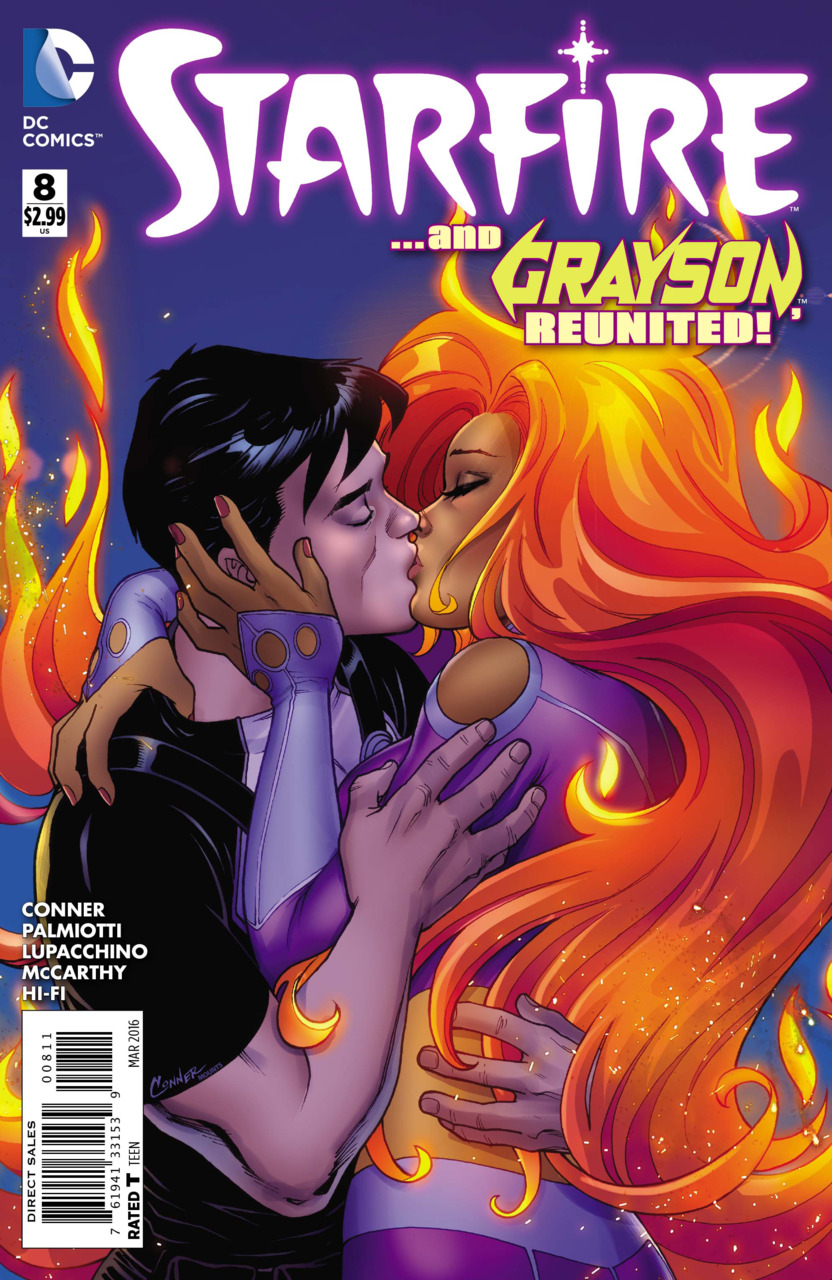 Editor’s Note: As we expand our coverage of comics reviewed, we will begin to cover other DC Universe titles that feature guest appearances by members of The Batman Universe.

Kori and Dick are reunited and it feels so good. Dick helps Kori with her love life and Kori helps Dick fight the bad guys on his tail in Starfire #8.

A cloaked helicopter comes out of the sky to the boat full of evildoers that Kori and Dick captured last month. Dick was on the hunt for a briefcase with a trigger device inside. Kori had helped him find it and destroyed the boat’s engine and the trigger in the process. Even so, Dick and Kori were so glad to see each other again after Dick’s not so fatal death that they decided to do some smooching on board the crippled vessel. The pair in the helicopter are confused about what they are seeing but see that the briefcase they are looking for is present. They take a photo and send it back to base and plan on shooting Dick and Kori and taking the suitcase back to headquarters.

Before they can shoot the lovers, the fairy sprite that befriended Kori in the last issue destroys the helicopter much to Dick and Kori’s surprise. They find that the woman in the chopper has survived and they leave the first group of baddies for the Coast Guard while Kori flies off with the injured woman and Dick in tow.

Sol, Kori’s original date for the evening, and his friend Rave are the Coast Guardians that arrive to pick up the crooked cargo. They discuss Sol’s ill fated date and Rave expresses her love, devotion and desire for Sol who keeps her firmly in the friend-zone.

Meanwhile Sol’s sister, Stella the Sheriff is visited by Atlee the lady from Strata, the underground world. She has a plan for the pair and Kori to go to visit her subterranean city in a pressure protected vessel. Stella isn’t too sure but Atlee’s talk of wine, cheese and a spa make her change her mind.

Over pancakes Kori tells Dick about how much she cares for Sol. Dick realizes that the pair’s date ended badly and that Sol is probably upset at him barging in and taking Kori away. Dick convinces her to leave him a voicemail message telling him that she is ok. She does as a bunch of creepy briefcase-searching thugs look on.

One of the thugs slips a tracking device into Kori’s bag which he neglected to turn on. They follow Dick and Kori by foot to a graveyard and begin to shoot at them. Dick shoots one and Kori’s energy blast knocks the others unconscious. Dick persuades the injured man to tell him that they were looking for the trigger device in the briefcase and also give Dick the location of the people that hired them. Since Dick has the information he needs he tells Kori he has to follow up on the trail of bad guys. They kiss and he leaves her.

Kori returns home to find Sol swimming in her pool with her fairy sprite. He is relieved that she is ok and they celebrate by performing underwater shenanigans. However, the fairy sprite sinks to the bottom of the pool and starts to glow stronger and stronger. By the time Stella arrives home she is shocked to see the pool glowing. Kori insists that something wonderful is happening. Until next month…

Amanda Conner and Jimmy Palmiotti give us a many phased and intricate plot in this issue. It is satisfying to see Kori and Dick back together even if just for a few pages. It is good fun to see them catch up with each other especially since Kori thought he was dead. However, it was strange to see him run right off. Grayson clearly had just a two issue contract and had to get back to his own book (by way of Midnighter). I suppose they were trying to boost Starfire sales with a guest hero and storywise it totally works here. It just feels a little forced (and also didn’t work if you look at the sales numbers, but that isn’t a concern of my review). However, if you are a Kori and Dick shipper you shouldn’t miss this issue.

I also understand the peculiarly daffy characterization of Kori. It makes her kind of cute but sometimes it gets a little much. She is a powerful, wise, loving creature and the writers sometimes portray her as a dingbat. It is a delicate balance that sometimes leans a little off the rails.

I like Ray McCarthy’s art but I have to give a lot of credit to Hi-Fi’s colors. The oranges and greens of the Florida Keys work very well with the vibrant colors they use for Kori herself. The concept of putting Kori in the Keys was a very good idea from a visual standpoint.