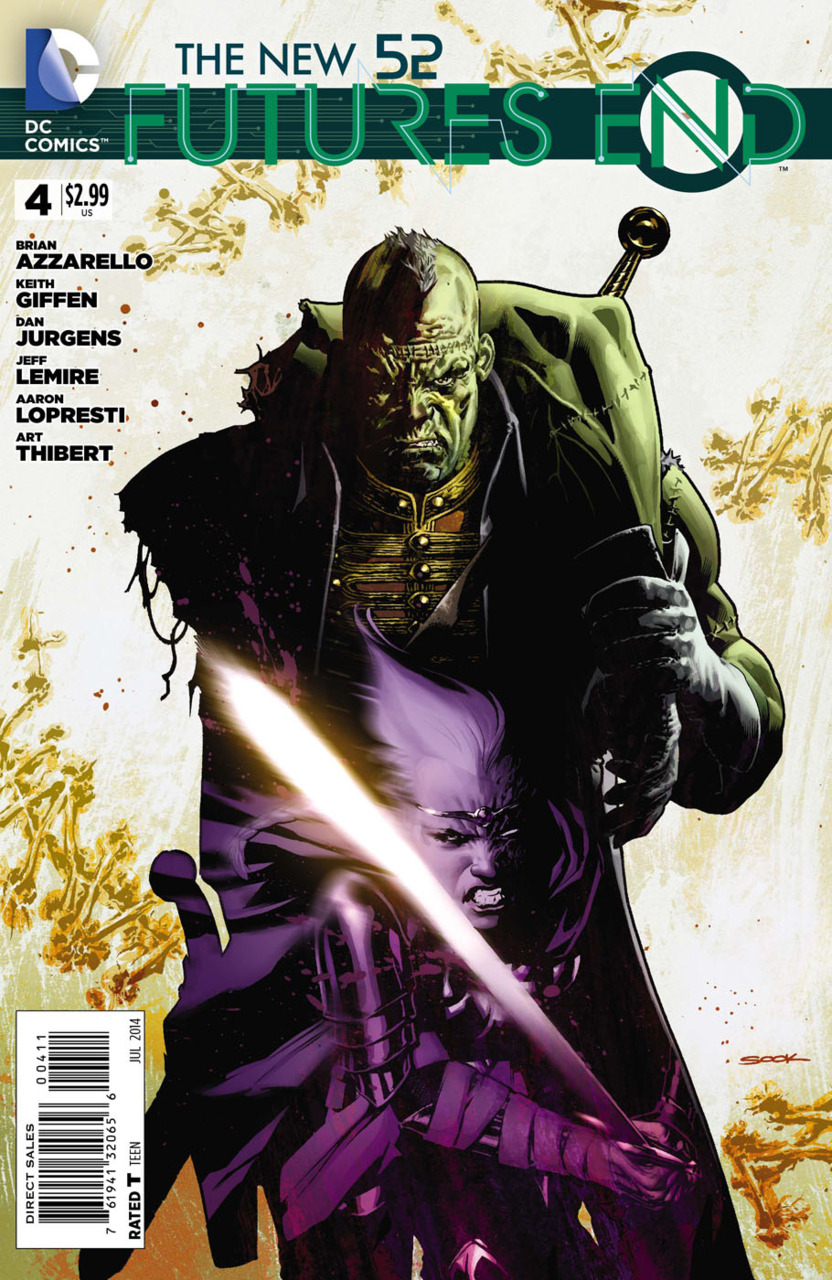 If I had to give you a highlight reel of what this series has been the past month, this cover would sum it up. Frankenstein is carrying his own arm over his shoulder. Every issue, someone has lost a limb, and the count continues this week.

As far as story goes, this issue is the least busy of the bunch, which is a nice welcome. We follow only four storylines instead of the five we've been getting. Which doesn't sound like much of a difference, but it worked so much better. And, much to my enjoyment, the majority of this issue, went with Frankenstein. He's been a my breakout surprise character of the year so far.

Aaron Lopresti is on art duties this week. If you read my reviews near the end of John Layman's Detective Comics run, you know I wasn't a fan of Lopresti's work on those last two issues. His work here, though, makes me eat my words. His work is very annimated in style. And characters, like Frankenstein, who have a lot of detail, Lopresti shines in his attention to all the line work. His facial expressions are top notch, making this a fun read. Overall, this is the best installment of Futures End so far, leaving me wanting more.

We begin at SHADE headquarters, where Frankenstein has been teleported inside the building. He's about to go on a rampage, and kill Father Time (who happens to currently inside an eight year old Asian girl), when Amethyst cuts off Frank's hand. Limb count, up one point (ding!). And this was hilarious, because they just nonchalantly give him his hand back, because he's Frankenstein, and can just stitch it back on later. Father Time then brings us up to speed on Stormwatch, and wants to send Frank & Amethyst into deep space. That's right. We will get Frankenstein. In. Space. I hope he is in a cool spacesuit. Ray Palmer (Atom) is working with SHADE, and informs them that they will make better time by cutting through the Phantom Zone.

Tim Drake is going for a run in New York along with his lady friend. She, calling him by an alias name he's come up with. He sees Batman Beyond, gets mad at Bruce for dragging in someone else into that life, and storms off. All the while, Lois Lane is watching him.

We get some low-rent villains, who are planning one big, last heist on Terrifitech.

And we catch up with Grifter, who has just killed a bunch of aliens. As he's leaving, he is shot buy King Faraday, who we saw in issue two, and was mentioned in issue three. The shooting paralyzed Grifter, and Faraday has called the cops on him, leaving him to deal with them, until he decides to work for Grifter.

This issue was fun. It gave us more than previous issues, but we also got many different stories. I enjoyed it.