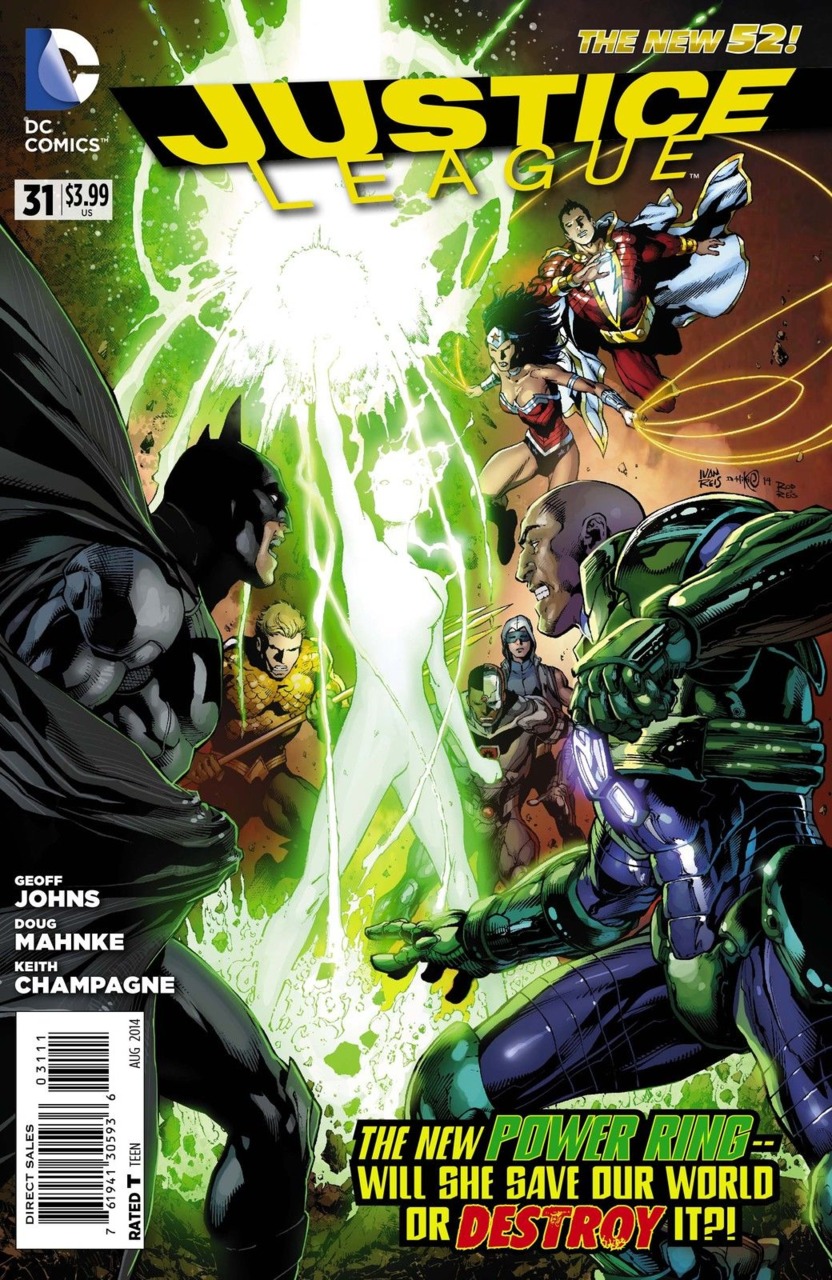 Yes, that’s right. We are still an issue behind with Justice League, and it seems like it’s could be awhile before they will be able to catch up.

Following up with Luthor finding out that Bruce Wayne is Batman, this issue picks up right where Forever Evil & the last issue of Justice League left off. Johns does a great job hitting all the points, and repercussions of DC’s most recent event. Making it feel like one of the more important events in recent memory. Johns also makes sure to show several of our heroes, when they aren’t in hero mode at all, which is an awesome way to get you in to these characters sense there are so many at play.

Mahnke is on art again this issue. Except this time he’s doing the whole thing. I’m not a big fan of his art. It seems a bit inconsistent. Sometimes the characters look great, and other times they look like they stopped a truck with their face (in other words, swollen). But Mahnke’s art looks it’s best when Rod Reis is coloring it, so that was a plus.

Jessica Cruz is scared to death, because A FREAKING RING IS TALKING TO HER! The ring has chosen her because of her fear. Fear because she was attacked and left to die by some people whom she was unable to identify. She has been locked in her apartment in the four years since. The ring wants to use her to kill everything on Earth. So she does what most of us would do, and takes a shot gun, and blows the ring away… Except the ring brushes itself off, starts singing Beyoncé’s Single Ladies, and puts a ring on her.

Meanwhile, Bruce is playing coy to Lex, denying that he is Batman. Lex then goes to prove it, BY POINTING A GUN AT BRUCE’S HEAD. Alfred doesn’t like this, points a gun at Lex’s head, and tells him to finish his drink and leave. Lex protects himself, but Bruce jumps through the air, as only Batman could do, and kicks Lex in the face. Lex claims to have felt a draft, and blows away Bruce’s grandfather clock, revealing the entrance to the Batcave.

Cyborg & Shazam are keeping watch, but Shazam is ‘super bored’. He wants a ping-pong table, a pool, a Xbox (which Cyborg has in his shoulder)… anything! They get to talking about Shazam’s powers, but he doesn’t really know what he can do. He tries something out, and magically appears an awesome Shazam ping-pong table!

Captain Cold has arrived at Lexcorp. And after taking pictures & signing autographs, Lexcorp takes his blood, looking for “Project: Wannabe.”

Lex doesn’t want to blackmail Bruce, he just wants to make a better Justice League for what is to come. But Bruce doesn’t trust him, and compares him to a scorpion. Lex leaves, and Alfred informs Bruce that he’d give his life for Bruce, as well as take one. That’s right. This is a bad@&$ Alfred. Superman and Wonder Woman are looking for the Power Ring, and believe to have found it.

Jessica is not in control of the ring, and it’s trying to kill as much as possible. But the Doom Patrol have been sent to deal with her. If you are wondering what happened to Element Woman, here she is, taking the place if Metamorpho… That could also be her new name. I’m not sure yet.