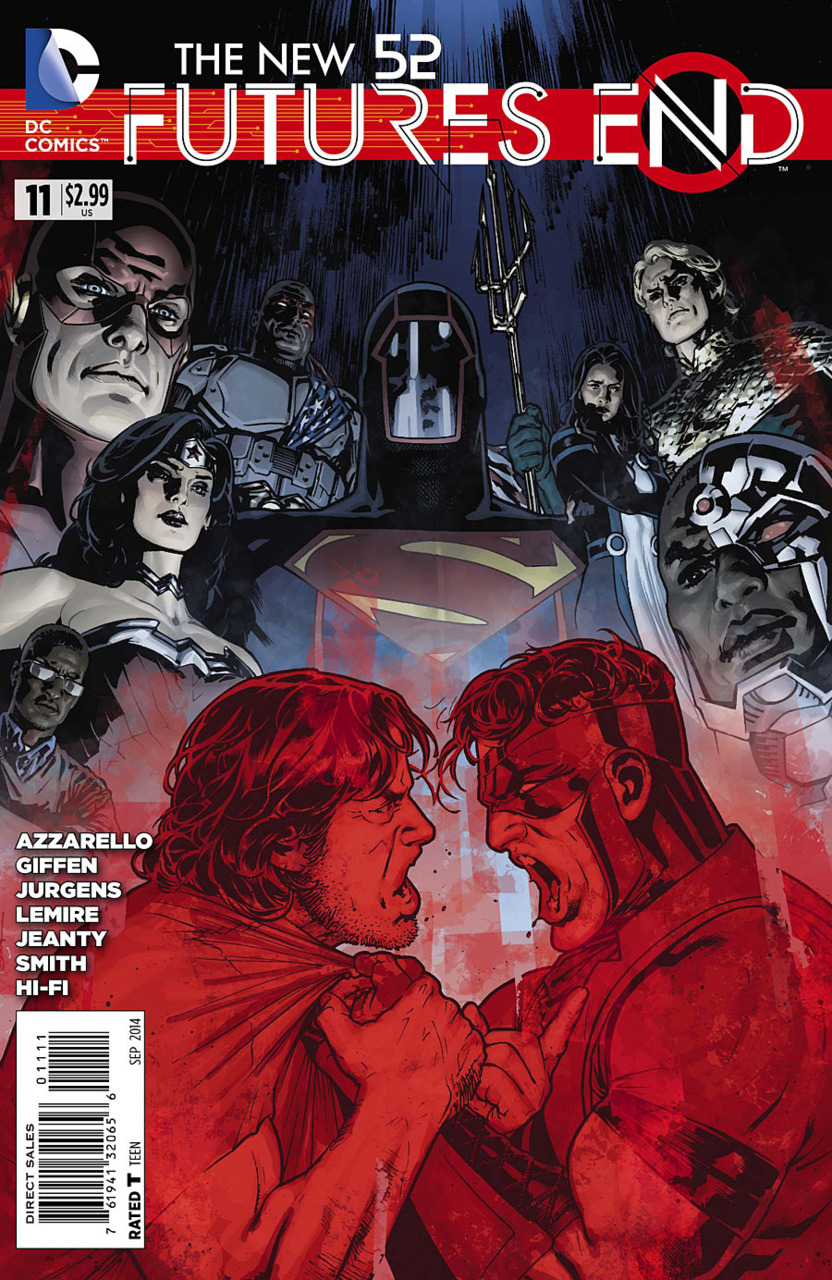 If you are interested as to who Superman really is, look closely at the cover. You can kinda see a face…. Eh. I can’t make it out. Great cover nonetheless. But the cover adds more intensity than the story actually does.

Up until now, I had no idea which writers were writing what stories. I watched DC All Access recently, and conveniently enough, my favorite writers are writing the stories I’m more interested in. Azzarello on the Batman Beyond/Mr. Terrific storyline. And Lemire on the Frankenstein/Stormwatch storyline. Jurgens on Firestorm hasn’t been bad. But Giffen’s Grifter story has bored me. However, this week, my favorite stories were reversed in their favorites.

We get a new artist onboard for this issue. Georges Jeanty (who will also be on Batwoman in October) did an okay job. He could dramatically improve his style, seemingly Cliff Chiang-ish. But if he stays where he’s at, I don’t see him getting a monthly book.

We see Justin (Grifter’s tech wiz) wake up, go to the fridge. Along with getting a bowl of cereal, he interrogates an alien by shooting it repeatedly. You know, how we all start off our morning. Grifter has been missing for way longer than 48 hours, so Justin heads out to find him. He makes his way to a nasty apartment, and finds Voodoo. Grifter had an arrangement made with her to take Justin in if anything happened to him, and she does so.

Frankenstein, Amethyst, and Hawkman are heading to see who the other surviving member of Stormwatch is when Hawkman looses power of the ship and crashes in a metal bowl on the surface of a planet.

Mr. T declares that he can’t release the uSphere because of the new Batman. He questions if he is alien, or from another earth, and calls for his capture.

A weird alien robot monster attacks a boat crew. (No idea what this is?)

It’s interesting to note that we don’t see Batman with the Justice League. Did they have a falling out? What happened there? I guess we will see later.