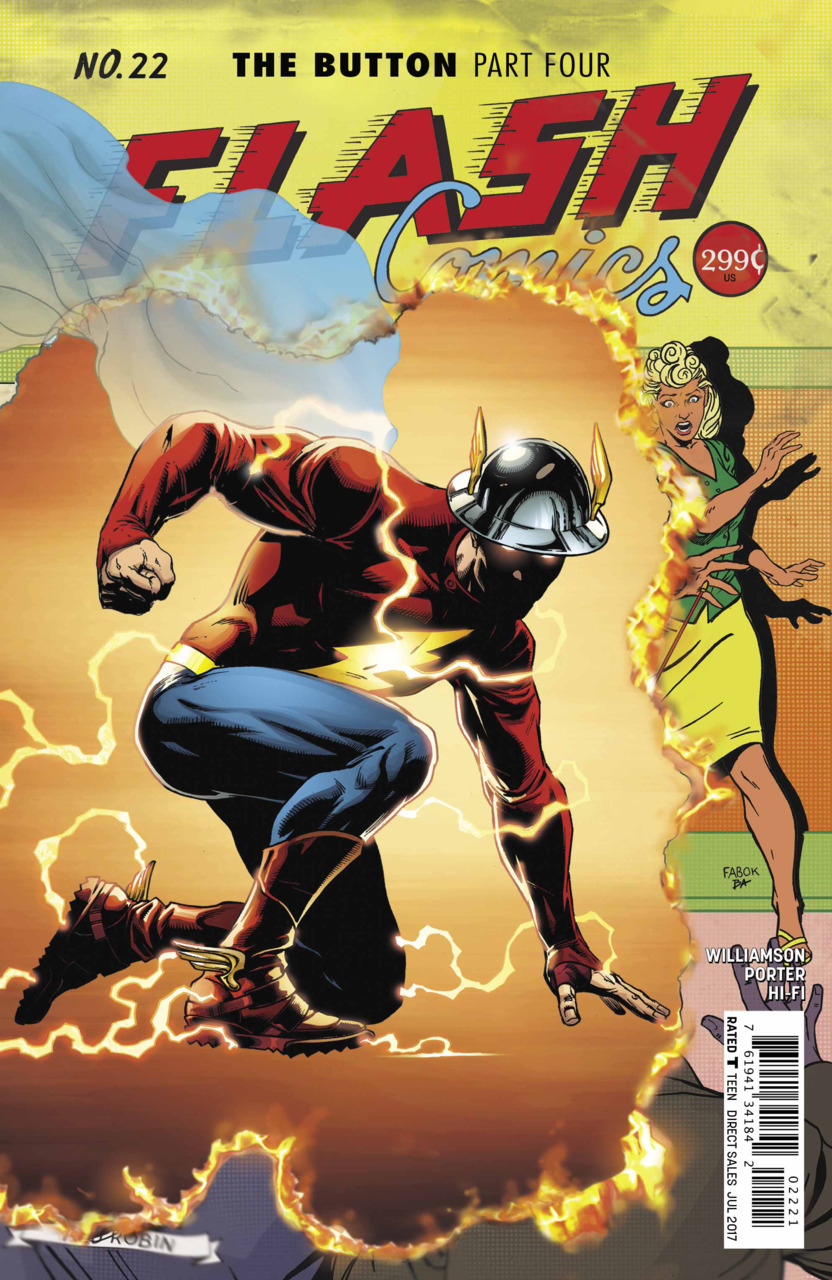 (Spoilers ahead) “The Button” has been a wild ride.  It started strong and maintained that course throughout the four issue run, despite some shakeups on the production end of things.  As we near its one year anniversary, I’m confident in calling The Flash #22 the first true sequel to May 2016’s 80-page giant DC Universe Rebirth special.  While this story wasn’t a game changer to the same degree, we received some much needed confirmation and some even better questions as the story progressed.  The speculation as we lead up to the next chapter of the story in November’s “Doomsday Clock” should be exciting.

Story-wise, the action is very quick and there are only a handful of beats to cover.  The chase is on in the timestream as Batman and Flash pursue Reverse Flash (from their past) as he heads towards the source of the traces of energy emitted by the titular button.  Despite dire warnings from the heroic duo, the headstrong villain makes it to the end of the line and comes face to face with his fate – death at the hands of “God.”  Back in the timestream the cosmic treadmill breaks apart from the pressure again, but Batman and Flash are saved by none other than Jay Garrick, the Golden Age Flash, who much like Wally West is trapped outside of reality.  He has enough power to propel the group back to where everything began – the Batcave and the body of Reverse Flash.  Unlike Wally West, however, Jay Garrick isn’t able to hold himself together in reality and is quickly cast out.  Meanwhile, the button is out there somewhere, in the possession of a glowing blue hand.  In a series of epilogue vignettes, we see Bruce and Barry bond over the loss of family, Bruce debate taking his father’s advice of letting Batman die, and finally, a close up of a battered Superman crest.

First, the confirmations.  What was widely acknowledged has been visually confirmed – Dr. Manhattan has made his first appearance in a main-line DC Universe title, if ever so briefly.  Seeing those words again after so many years brought forward a great deal of nostalgia and left a smile on my face.  The big news, however, is the return of the real Jay Garrick.  While we had a Jay Garrick over in the pages of Earth 2, he was a pale comparison of what we really needed.  One of my favorite aspects of the DC Universe has always been the presence of the past and the future.  Simply put, the legacy.  Bringing Jay back is the first major step towards reuniting the Justice Society of America and giving our heroes that sense of belonging to something greater than just themselves.  As Wally West warned, there’s a war coming between hope and despair.  Seeing these pieces slowly come together to bolster hope is something I’ve been looking forward to since this whole thing began.  It almost makes the New 52 experiment worthwhile.  Almost.

Now, the questions.  We know Dr. Manhattan is involved.  But, we never saw the character Reverse Flash deemed to be “God.”  They may be the same person, they may not.  I have a feeling however that there is quite a bit more to this than just Dr. Manhattan being the villain of the piece.  Seeing Reverse Flash’s complete 180 degree turn from confidence to fear was a great bit of storytelling.  He also had a very telling line of dialogue where he says that none of this really matters until it is put back together.  This is especially true since the next arc of Flash seems to feature Reverse Flash as the main villain, despite his death in “The Button.” Closing the story on Superman’s crest is especially interesting.  If you’re familiar with your Watchmen history, you’ll remember that part of Dr. Manhattan’s story concerns dealing with how to exist as a God.  Superman has some experience in that department.  I think it would be a little cliché for this all to be about Manhattan testing Superman, but I have a feeling it will be an important plot point down the road.

I feel like this is a story Joshua Williamson was born to tell.  This was a very tight story with only a handful of characters so he was able to flesh them out a great deal.  The bravado of Reverse Flash, Batman’s constant awareness of his surroundings, Flash’s focus on moving forward.  All are small touches that really bring the story to life.  I hope going forward Williamson is involved with more of the core Rebirth mythology.  Over the past year a number of characters have begun to subtly fall in line with their pre-Flashpoint counterparts and it was clear in these pages that we’re going to continue in that direction.  It’s not something that’s going to happen overnight, but I’m fine with that as long as the story remains on point.  Howard Porter’s art continues to astonish here.  He manages to balance reality and absurdity in a manner that draws the reader into the story.  I need to reiterate that this story involves a man running through the timestream on a treadmill.  And Howard Porter made it look amazing.  I’d love to see him permanently on the Flash.

This story wasn’t perfect, however.  There will be blowback.  While there was confirmation, we never received any answers.  In fact, this reminded me a great deal of the ending of “Trinity War,” where nothing was really resolved, we were just left with more questions and the beginning of the “Forever Evil” event.  I think this was a tad more successful than that, but the extended wait time until the aforementioned “Doomsday Clock” may be grueling.  At least “Forever Evil” kicked off right away.  I’m sure we’ll have some teases between now and then to keep us interested, and with the convention season underway, maybe we’ll be getting some unexpected treats.

There’s a lot to this story, and I’ve barely scratched the surface.  I’m looking forward to giving this one multiple reads in the future, and isn’t that one of the greatest compliments we can give?