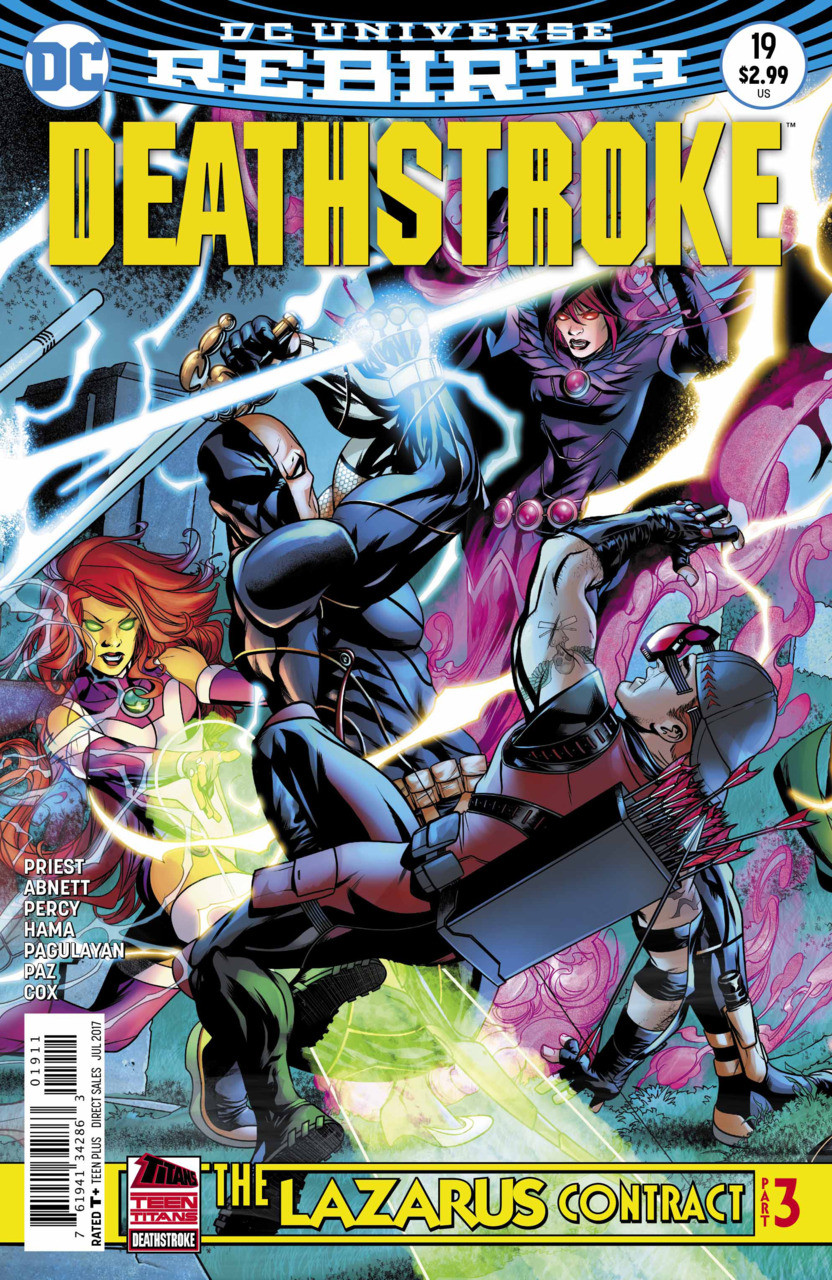 (Spoilers ahead) As the newest speedster races onwards, the next part of the “Lazarus Contract” continues with Deathstroke and Flash (Wally West) streaking across the opening panel. As Deathstroke tells Wally that he means him no harm, and that the “deal” is still in place, Wally himself wonders aloud what exactly the “deal” is. As Slade begins to explain how exactly he has harnessed the other Wally’s speed, we learn that a former Central City scientist (Dr. Darwin Elias) had designed a device to siphon the Flash’s Speed Force energy and store it.

Flashing back several years, a young Dick Grayson (still clad in his Robin costume) speeds on a bike towards a waterfront warehouse. Suddenly accosted by gunfire, Deathstroke appears and holds the Boy Wonder at sword-point. As Robin asks what the Terminator wants, Slade recounts how he had assumed the contract against the Teen Titans that was originally put out by the organization known as HIVE. Slade’s son Grant had died during the execution of said contract due to a serum that HIVE had given the son of Deathstroke. Pushed to reveal the truth, Deathstroke reveals that he knows about his daughter Rose (at the time still a child) and wants Robin to instill his values into her. Agreeing to effectively turn the contract against the Titans into a Lazarus Contract (something that can be resurrected should either party fail), Dick and Slade agree that Deathstroke will cease attempting to kill the heroes if Dick will train Rose.

Back in the present, Deathstroke and Flash continue their race around the world. As Wally attempts to stop Slade, Deathstroke turns for a fight…something that will level the playing field between the two opponents as they are both currently speeding. However, Wally turns to run.

Cutting back to the Garden State Medical Center, the remaining Titans and Teen Titans wait for Wally’s return…meanwhile Robin (Damian) begins to interrogate Kid Flash. As the two begin to argue over Slade’s motivations (mainly wanting to resurrect his dead son Grant), Nightwing interrupts the two. Realizing that he can help Flash, Kid Flash begins to speed off but his efforts are halted when he learns that his speed is gone (due to Deathstroke having siphoned it off).

As we move on to Los Angeles, Flash suddenly appears before a blonde man in a suit…this person is Slade’s other son Joseph (known to readers of the 1980s “New Teen Titans” as Jericho). Needing help to defeat Slade, Wally pleads with Joseph to tell him about his father. We are then treated to a series of flashbacks that involve Slade’s “parenting” of his boys: taking his boys hunting with Grant running off into the wilderness; Grant running away from home and getting into a fist fight with Slade.

We then see a series of panels with speedster Deathstroke killing several people. As the scene resolves into a hospital room in New York, Slade can be found sitting next to Rose’s bedside as Wintergreen comes to visit. As the two comrades discuss Slade’s plans for reviving Grant, we cut to a scene between Nightwing and Robin who come to an agreement that the Titans and Teen Titans will need to stop their arguing and accusations and work together. Finally contacted by Wally, he informs Dick that he and Jericho will be heading east to a location known as Hatton Corners…the site of the Titans old headquarters and the place where Grant died.

As the issue comes to an end, we can Deathstroke prepping for a major speed burst until he suddenly arrives in the past. Clutching onto his son Grant, Deathstroke holds his son in the final panel.

Well, Part 3 of the “Lazarus Contract” has come and gone and answers are swimming past our eyes.

Although it was a bit obvious that Slade Wilson was setting out to revive his son Grant, it was interesting that he would attempt to siphon off the Speed Force energy from our two resident Flashes…both named Wally West. In this issue, Deathstroke finally succeeds in returning to the past but not before he kills a few people for good measure. I would assume that these were outstanding contracts of his own, as Slade comments to that fact. Either Slade was wishing to finish up any contracts under his name before his potential success/failure or he wanted to ensure there was plenty of cash to provide for Rose’s healthcare. Either way, it showed that Slade (even though quite evil) is a man of his word. Although this point did not need to be displayed (simply see Deathstroke’s reasons for taking up Grant’s contract in the epic storyline “The Judas Contract”), it was nice to hammer the point home that his word is an important bond. This could also somehow play a point of the “deal” that was struck between Slade and Dick Grayson.

Speaking of the “deal,” we finally learn in this issue what the deal was. An agreement that Slade would stop hunting the Teen Titans in exchange for Dick training Rose…however; this is not a simple combat lesson. Slade wishes for his daughter to be different, to hold a different set of morals and guidelines than himself. At some point, Dick Grayson must have secretly taught Rose his own moral compass…and succeeded enough that Slade is still holding up his end of the bargain.

There were a few Easter Eggs in this issue that draw back to the Teen Titans history. The most obvious is the title of the story itself: “The Lazarus Contract”…strikingly similar to “The Judas Contract.” Both stories are grounded in a contract that was taken up by Grant Wilson (aka Ravager) and initiated by the organization known as HIVE. Both stories revolve around the villainous Deathstroke who is seeking a goal that revolves around the Titans (Judas focuses on the Titans’ death, while Lazarus sees Deathstroke manipulating the team to aide in his son’s resurrection). It is also interesting to note that both “Judas” and “Lazarus” are biblical figures…Judas was the Apostle that betrayed Jesus (similar to how Terra helped to take out the Titans) and Lazarus was a dead man that was resurrected (similar to how I assume Grant will make a return).

One neat call back was the mentioning of Hatton Corners that everyone seems to be heading towards. Originating in the “Brave and the Bold #54,” Hatton Corners was the name of a small town that was saved by the first incarnation of the Teen Titans (Robin, Aqualad and Kid Flash) as they battled against the malevolent Mr. Twister (who we saw in the “Titans Hunt” miniseries that led into “Rebirth”).

Overall this has been an interesting story and I like how Priest and the other writers expanded a bit on Slade’s history with his sons. I was always under the impression that Grant was the favored son, while Joseph was the outcast…but this issue seems to suggest the opposite. The art as always was excellent and the connecting covers continue to be a favourite of mine.