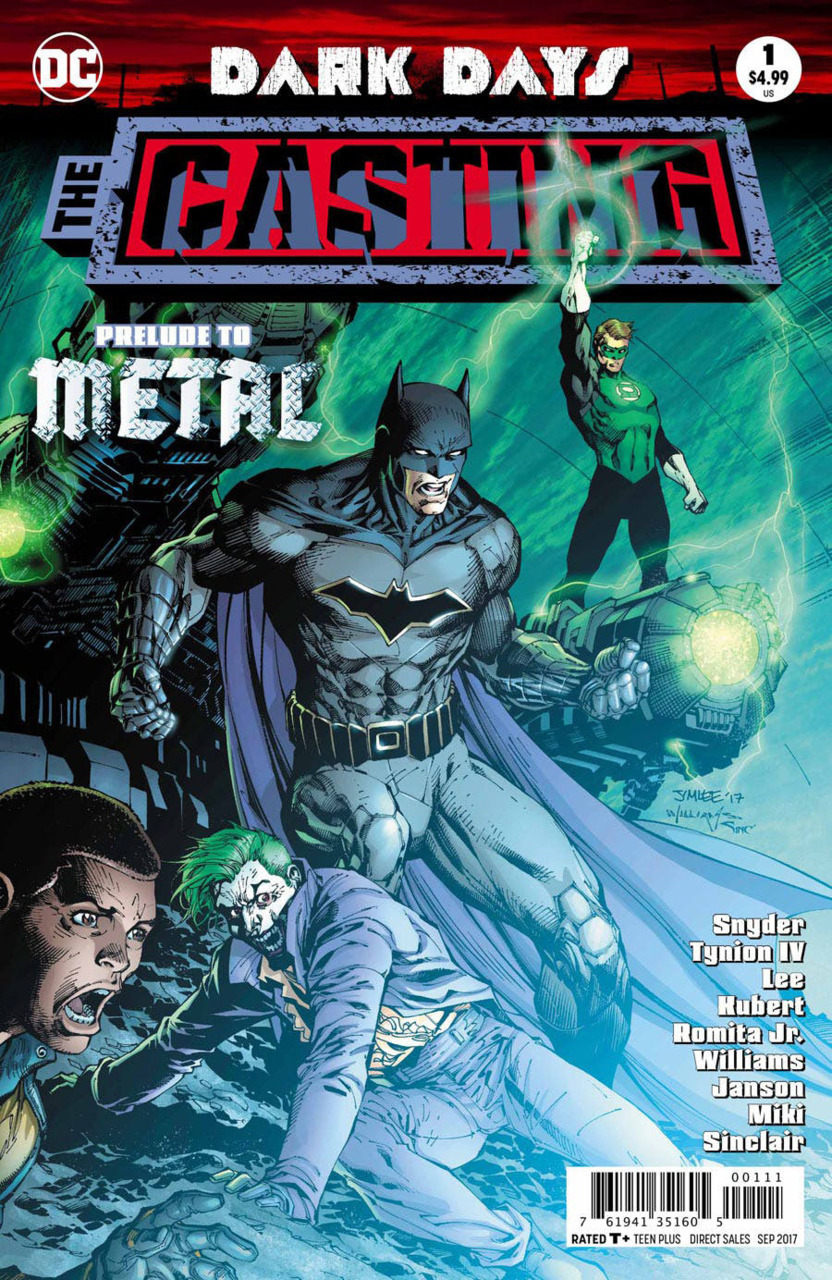 The Short Story: Batman goes to a dark place as the DC Universe looks to having a potential Crisis.

Synopsis (spoilers): We continue to read from the journal entries of Carter Hall, aka Hawkman, as he and Hawkgirl walk through the hallways of a museum. They come to an exhibit with a group of hooded figures. Among them being Ra’s and Mary, Queen of Blood. A hooded wizard pulls out a dagger that emits sparks, and he stabs a wooden plank, causing the entire room to light up. A time laps occurs, as we follow Carter and Shiera while they explore various caves around the world. Finding stories of a demon who took the form of a bat, and fought against the birds. The two realized that it was the metal that carried such dark power. And to stop it, they needed to destroy it. But it had an allure to it. It held such power, they wished to learn from it. They created science facilities, and formed teams such as the Challengers of the Unknown and the Blackhawks… Until one day, when they found the Abyss. Carter stared into it, and something stared back. He now wonders if this research is doing any good, or if he’s dooming them all instead. Either way, he has to see this through. He’s going in…

Meanwhile, in Greece, a medieval-armor-clad Batman fights a griffin and is outmatched until Wonder Woman shows up and tells him to fly away, and he does so. She asks Batman why he is there, and he explains that he needs to speak to Hephaestus. Diana reveals to him however, that the gods have abandoned the earth. They believe a war is coming that will change everything… but she sees that deep down, Bruce already knows this. She gives him Apollo’s sunblade, and tells him that he will be able to shine a light on the darkness ahead with it, and also warns him to not throw that away in exchange for the darkness.

Batman follows the sword’s direction into the Sonoran Desert in Arizona. He’s about to call in the Outsiders, when Dubbilex (for reference, he’s the mutant telepath in the opening episodes of Young Justice) shows up and warns Batman of the darkness that is approaching. He collapses in exhaustion, and Talia al Ghul shows up. She talks of the war that is coming, and that there is no way to prevent it. The only way, is by arming yourself. She knows Batman has one of the “potentials” living under his roof – he’s not blind to the situation. She came here to retrieve the knife… And Batman offers her a trade. The eighth form of metal (the sunblade) for the ninth. She accepts, telling him that the knife carries great power. The power of Shazam…

In the Batcave, Joker taunts Duke until he snaps, but this ends up freeing the Joker instead. The power shuts down, and Hal still can’t use his ring for anything. The two find Joker in the cave, beating on the cloning machine with a crowbar. Hal, again, tries to stop him, but his ring still won’t work. Hal gets knocked off the ledge of the cave when Duke tackles Joker. He begins beating him as Joker tells him this has all happened before. He tells him of the Meta gene flowing through Duke’s blood – from the metal. It’s just another mineral in his body. Batman didn’t take him in to be another Robin. He has another role to play, but Joker is here to stop that. He’s here to kill Duke. He knocks him off the ledge, but he comes back on top of the Batwing with Hal Jordan at the controls. Hal informs Joker that he’s a member of the Air Force, and sends a claw to hold Joker in place. Duke looses it, and passes out as a bright light emits from his eyes. Joker disappears in the confusion, and Batman finally makes it back home. Batman pulls out the dagger, and it begins to do something to Duke. Hal loans him his ring, and he’s able to create a construct of the vision he sees in his head. Batman carefully placed the dagger in a particular spot in the room surrounded by other metal items in the DCU, and takes his place on the machine. He blacks out for a moment, not understanding what happened… all he saw was darkness.

Three thousand miles below Gotham, shrouded creatures talk of how they’ve hidden what was in the abyss from Batman. The dark days are over, and the Dark Knights are coming, as we see the various evil incarnations of Batman. “And with them, the true father of Batman.”

Analysis: The concept of this story truly intrigues me. And what is to come sounds fascinating… but the execution of this book had some to be desired. I really like how Snyder and Tynion break the book up. It creates an interesting dynamic throughout the book that keeps you on your toes, but the page turns felt pretty weak and forced in some moments. Also, the opening scene taking place in a museum felt weird. All the characters involved have been alive for centuries. That scene would have felt more powerful if it took place in ancient Egypt, or something similar. Batman getting involved with the Ancient Greek gods was a cool idea that I feel has yet to be explored, so good on these guys for heading into uncharted waters. Batman trading a weapon that emits light and banishes darkness for one that embraces the darkness was a nice touch as a METAphor (creepy voice: we are all tied to the metal), as you could say that’s what Batman has already committed to in his life… Or, could it be foreshadowing what is to come?… I really like that Carter Hall started up the Challengers of the Unknown as well as the Blackhawks. I don’t know if that was in the past continuity, but I like it. I also wonder if they will come into conflict with Batman down the line.

It kept emphasizing bats vs birds, not bats vs hawks so that got me thinking… is that all birds? Primarily, Batman’s partners have a bird theme. Gotham City even has a team called the Birds of Prey… one of Snyder’s biggest additions to the Batman Universe were the Court of Owls and their Talons. I don’t know that I want all of the Robins taking sides against Batman, but from a narrative point of view it makes sense. I love the scale of his comic. I love that these writers remembered that Hal Jordan is a member of the Air Force, because it seems most forget that. I don’t know what to think about us meeting the true father of Batman. I hope it’s not as straightforward as it sounds. I hate that we don’t get an explanation for how Joker is back. Last we saw him was Endgame, and he was “normal” again. I’d like to have seen that transition back into the psychopath – that would have been a really interesting story… instead, that was just kinda dropped. I really don’t like that. Nor do I know what to think of all these hints that he is this immortal demon who comes back again and again, but it ties everything Snyder has done up very nicely. I don’t know why they decided to do two number one issues as a lead-in, because I don’t think you could read this without the previous book, but it probably had some sales bump because of it.

I felt like the planning of the artist was really well done up until the last scene. We start off again with Andy Kubert and Klaus Janson. Kubert’s work is much better than last issue… it’s more him. And that brings me with my problem with his art… the second half of this comic. He gets back into that weird Frank Miller Dark Knight Returns mode, and it just doesn’t work here. It worked well for DK3, let it stay there. I really don’t like Klaus Janson on his pencils, but I do like Klaus on Romita. Swap their inkers, and this book gets a lot better. Look at Kubert’s work on Damian Son of Batman, and you’ll see what I mean. His artwork has taken a serious backslide, and it needs to stop.

Next is Jim Lee and Scott Williams. The two have been a pair for a long time, but it’s Lee’s pencils who take a hit here. I don’t know if it was time restraints or what, but his work is not up to par here. Now don’t get me wrong – bad Jim Lee is still better than ninety percent of what we usually see, but his body form was off, and his facial features were off. Especially on Joker in that first scene. Not to mention that on the cover, he drew Joker completely different for some unknown reason…

John Romita Jr. and Danny Miki do the scenes with “Knight” Batman. Not only does that sound like an action figure, but it also would be an amazing action figure. These guys knock it out of the park here. They absolutely killed it. Their Wonder Woman looks amazing, Batman looks super cool, and the storytelling is top notch. These guys were definitely the standout of this issue. In the last scene, things get jumbled up, as all three teams end up drawing a few pages in this scene, as if Lee wasn’t fast enough to finish it.

Alex Sinclair and Jeremiah Skipper color this book, and they do a great job working together. Their colors were solid all issue long. Steve Wands letters this book, and does amazing. I really like the font and letter boxes he uses for Hawkman. It adds a nice touch.

Overall: This book is supposed to get you excited for Metal, and it accomplishes that. It has great concepts, ideas, and art teams, but the execution isn’t quite there.