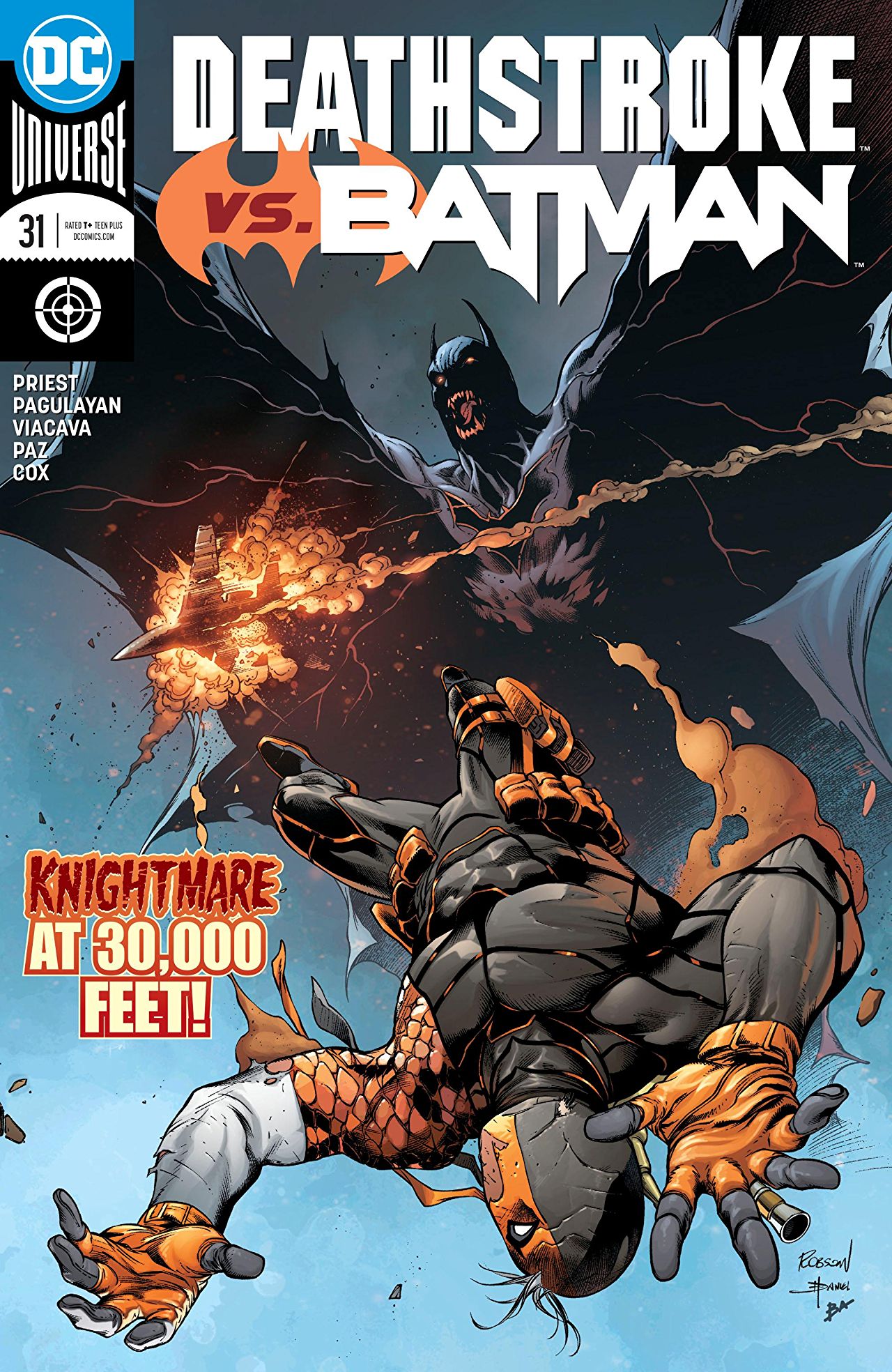 Overview: As Deathstroke’s plane is shot down in the Middle East, Bruce Wayne faces threats that are more underhanded nature in Gotham.

Synopsis (spoilers ahead): In flashback, Joseph Wilson gives us Deathstroke’s backstory – lying about his age to join the army and escape his father. How the military gave him structure without forcing him to make moral choices.

Today, Slade and Wintergreen fly to Saudi Arabia for a new assassination job. Their jet, disguised as an ExFed delivery plane, is shot down by handheld missile launcher, and while Wintergreen takes the only parachute, Slade puts on his Ikon suit, which will help him survive an unaided sky jump along with his rapid healing and enhanced strength. Slade loses his sword in the crash and turns on his AI version of Wintergreen to help him locate the weapon. However, before he can get up from his impact crater, Batman appears, repeating his promise that “Deathstroke is closed”.

Flashback Robin tells us about his relationship with Batman – how he had to assume that his father figure loved him, and the desire to earn the right to be his son, despite being a weapon in Batman’s war against crime.

Now, in Gotham, Bruce Wayne researches Slade’s family. He recalls Slade’s threat that Deathstroke allows Batman and Robin to go on living, and relives his parent’s deaths. The emotions cause him to destroy the computer monitor he’s using to research, and Commissioner Gordon enters, asking if he’s redecorating. Gordon tells Bruce that someone just stole Wayne Enterprise’s new microprocessor, technology so advanced that the US government took an interest.

In Saudi Arabia, Deathstroke tackles Batman and discovers it’s another decoy, like the one that fooled him last issue. He strips the imposter of the Batsuit and burns it, before heading off to retrieve his sword, hoping to find the group that shot the plane down.

In Gotham, Bruce takes two of his security personnel to confront the petty thief who stole his technology in a staged bar robbery. The thief tells him how he got the job from a woman who sounded Russian, and Wayne leaves, after giving the man a tax form so that he can keep his payout after the FBI arrests him.

Deathstroke is greeted by a sniper shot as the group which shot him down surrounds him, and their leader, a woman, appears with his sword and attacks.

Adeline Kane, director of the freelance intelligence contracting project codenamed Defiance, enters the Gotham US Federal building, where Batman confronts her. He tells her he knows that she stole the Wayne technology, and she proposes that they help each other.

In the parking lot, Alfred, who’s been driving Bruce around in a taxi, calls Wintergreen to warn him about a wrinkle in their plan to save Bruce and Slade from themselves. Wintergreen is furious about being shot down and thinks both are too far gone, but Alfred insists they keep going.

As Slade faces the woman who stole his sword, he reveals that he knows her identity: Talia Al Ghul. She tells the “man of rage” that she has much to tell him about his son, and kisses him deeply.

Analysis: As with the previous chapter, the parallels between Batman and Deathstroke inform the structure of this narrative. We have another iteration of the analysis and critique of both Bruce and Slade as fathers from Joseph and Robin. My colleague at TBU believes that the costume indicates that this Robin is Dick, and there’s a strong case for that, but the sheer level of rage and frustration indicates that it might be Jason to me, especially since in Justice League, Priest wrote Dick and Bruce’s relationship as much more supportive. However, time is a great healer, and a Robin just about to transition to Nightwing might have a lot more rage about his father figure than one who’s been his own man for several years. On his blog, Priest has explicitly refused to confirm the identity of the Robin in the interviews, saying only that the footage is quite old.

The parallels continue with the appearance of both Adeline Kane and Talia Al Ghul, the former wife and lover of Slade and Bruce, and mothers of their sons. For all the online furor over Priest’s deliberate stirring the pot about Damian’s paternity at C2E2 last month, it’s clear that the real drama is about much more than who is Robin’s father. In fact, the final line, “I have so much to tell you of your son” by Talia is indicative that there’s something deeper going on. Since if Priest really wanted to create a question, he would have written the line as “about OUR son” – so it seems as always with Priest, there are wheels within wheels. And Talia’s own plots are still to be revealed at the end of the issue. For example, we don’t know if Batman contracted her to take down the plane, or if she took over the group he set up, or if it’s completely independent.

The plot strand where Bruce follows his stolen technology from the bar to Adeline Kane has a deep strain of Priest’s characteristic dark humor. Batman’s immense detective skills are consistently set up and then knocked down, without detracting from his real skill and intelligence. The sheer level of plotting that Priest has put into the conflict between these two puts previous clashes in other writer’s runs to shame. Where writers like Tony Daniel and James Bonny have simply had an over the top fight scene (with admittedly gorgeous art) where Deathstroke analyzes Batman’s fighting style, here both players have plots that stretch out over days and many continents, while still having the direct fist on face action that satisfies our desire for direct action.

The fighting and plotting are both beautifully rendered by Carlo Pagulayan’s pencils, precise and incredibly detailed as always, enhanced by Jason Paz’s very fine inking and Larry Hama’s expert storytelling assistance in layouts. Special attention from colorist Jeromy Cox to things like the purple of Batman’s cape and the sheer, lean menace of Slade’s Rebirth costume, with it’s black, gold, and white color scheme – so different than the bulky intimidation of the “classic” costume seen in Pete Woods’ rendering in Justice League or John Romita Jr. and Victor Bogdanovic’s depiction in The Silencer, but still so recognizably Deathstroke.

Final Thoughts: Kicking the action and stakes up several notches, new pieces place themselves on the board in the game between Batman and Deathstroke.