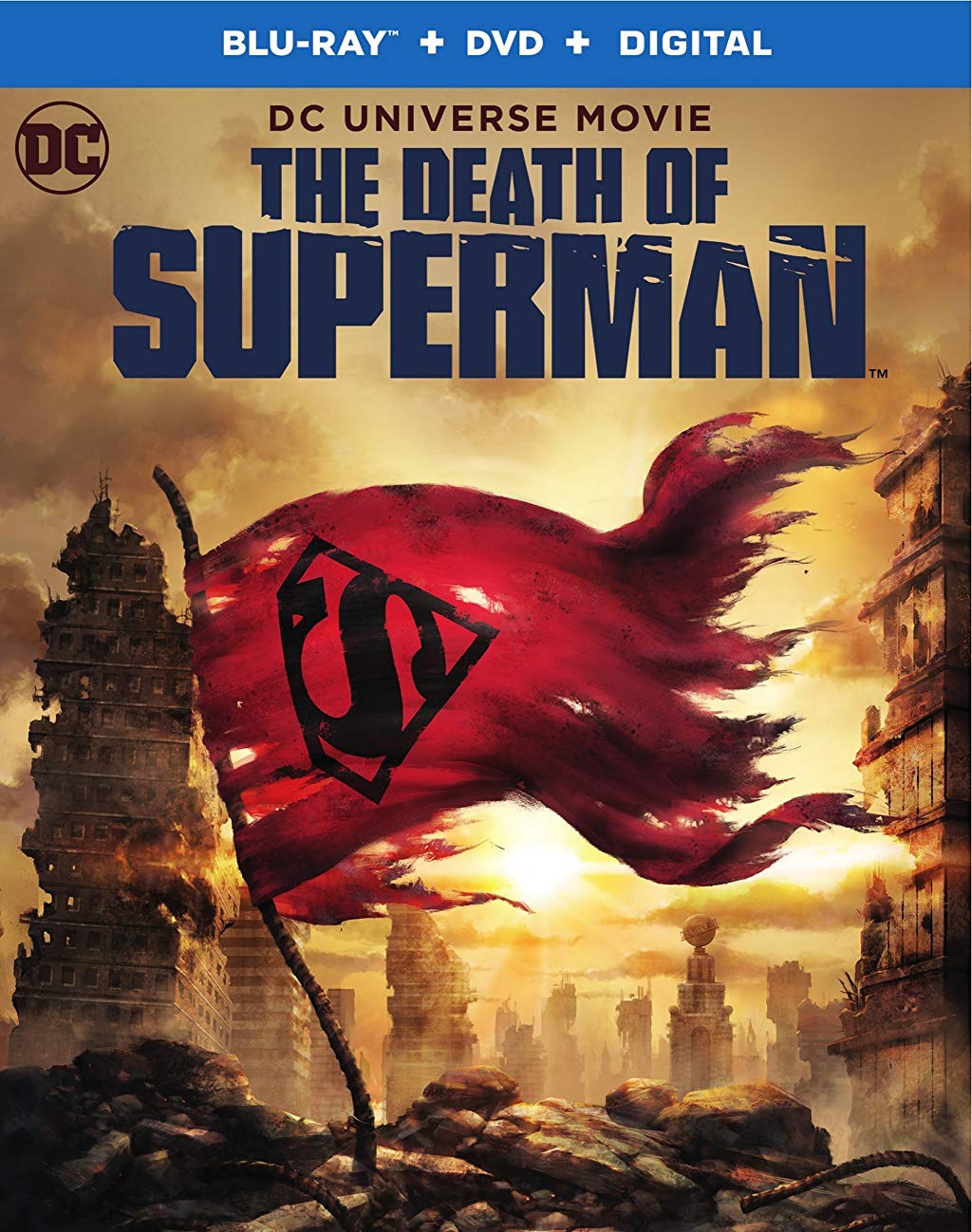 Overview: The latest offering from Warner Bros. Animations is an animated adaptation of 1993’s Death of Superman storyline.

Synopsis (spoilers ahead): As Superman learns to let Lois Lane into his life, an unstoppable monster dubbed “Doomsday” lands violently on earth and begins a path of destruction, killing indiscriminately.  As Lex Luthor looks on in interest, the Justice League tries to stop the monster but is quickly all taken down.  Just as Superman reveals his identity to Lois Lane, he is called away and is forced to make the ultimate sacrifice to defeat the monster.

Analysis: Co-directed by Sam Liu (All-Star Superman, The Killing Joke, and Batman: Gotham by Gaslight) and Jake Castorena (Justice League: Action) and written by comic book veteran Peter Tomasi, the film is fairly straightforward in that its focus is a grudge match between Superman and Doomsday but I think that the film did a good job in giving the story more of an emotional core in focussing the film around Clark and Lois’ relationship. There is something wonderfully tragic about Superman finally letting his guard down to Lois only to have him die a brutal death in front of her. I think there is some great moments at the end of the story where Lois, along with Clark’s parents, aren’t able to mourn for their loved one in public.

Real life married couple, Jerry O’Connell and Rebecca Romijn, have chemistry as Clark and Lois.   My preferred version of Superman is that he’s a regular guy who can do amazing things and I think that this is what O’Connell is going for in his performance.  The Office’s Rainn Wilson is on paper a perfect Lex Luthor and I think that he is fine given what he had to work with, but Lex in this, as written, seem a bit too cartoonishly focused on proving he’s smarter than everyone else, and I think while that is definitely part of Lex Luthor’s character, it shouldn’t be the sole focus every time Lex opens his mouth.

The film balances a large supporting cast well in bringing in Superman’s larger supporting cast like Bibbo, Maggie Sawyer and Cat Grant into the story and I enjoyed the banter between the Justice League during their downtime.  The Flash taking a dig at Batman’s parental responsibilities was a fun moment.

The film is well produced.  The animation did a fantastic job of capturing the sheer brutality of the fight between Superman and Doomsday and makes good use of the freedom that its PG-13 rating offers.  I especially liked the sequence where Superman tries to fly Doomsday into space, only to have Doomsday fling him around by his cape and bashing away at him as they plummet back to earth.

As far as adapting the source material, I think its safe to say that in modern comics, nothing else has quite had the mainstream cultural impact that 1992-1993’s Death of Superman storyline.  You can’t undersell how huge an event it was, with the death of the Man of Steel in Superman #75 selling over six million copies. I was twelve when that issue happened and while I was aware of the event and would thumb through the issues as they came out, my biggest memory of the event is the black Superman armband that Batman and Robin wore during the first couple issues of the Knightfall event.  As I sat down to review this movie, I thought I should actually sit down and read the source material.   I think its fair to say that the Death of Superman is better as an idea and as a cultural phenomenon then it is a truly great comic. I think that my biggest issue with the story is that it comes for a time when the focus of the business was the individual issues, not how it reads as one big story, and as a result, the story doesn’t feel as big as a deal as it should.  It’s also basically a story where Superman fights a no reason monster and it feels sloppy that there’s not some larger reason that Doomsday attacks Earth that connects to Superman and the eventually multiple “Supermen” that try to take his place.

That brings us to this adaptation of the Death of Superman.  Warner Animation has already had one kick at that particular can with 2007’s Superman: Doomsday which borrowed more of the concept than anything else.

This film remains more or less faithful to the structure of the source material.  Doomsday comes to Earth as an unstoppable force that bulldozes the Justice League, leaving Superman to make the ultimate sacrifice.  One of the changes that the film does make is in swapping out the 1992 Justice Leaguer roster which included Maxima, Ice, Fire, and everyone’s favorite character…Bloodwynd with the current team of heavy hitters like Batman, Wonder Woman and the Flash. (It is interesting to remember there was a time before Grant Morrison’s 1997 JLA when the Justice League was a collection of Z-list superheroes).

There are some fun nods to the original source material.  Lex Luthor in 1992 looked a lot different to the Lex Luthor we all know and love and there is a fun nod to that in the film for instance.  I also appreciated how the film did a great job of seeding the second part of the story, like setting up the four “Supermen” in an organic way throughout the story.

I also like that, unlike the original comic, Tomasi tries to give some sort of reason for Doomsday to appear on earth, explaining through dialogue that Doomsday is a biological weapon that hones in on major urban centers and destroys all challengers, which is more than the source material gives us.

It’s interesting that the filmmakers chose to set this film in the DC Universe series of films that started with Justice League: War instead of making it more of a standalone film because there is really no reason to connect this film to the previous films.  There are passing references to previous films with Superman and Wonder Woman acknowledging their past relationship, but other than that, there’s not really any history that the film is relying on.  It actually seems in some ways, that the film is being used as something of a soft reboot to bring this ongoing animated continuity more in line with the DC Universe Pre-New 52 that we seem to be getting post Rebirth in the comics.  Superman and Lois Lane are an item again.  Wonder Woman, over the course of the film, starts to resemble her look from the comics.  I think its very telling that after Superman’s death, the statue that is erected to memorialize him is wearing the classic Superman costume that he has just returned to in the comics and I can’t help but wonder if this film is signaling towards a more classic approach to the characters.

I do find it interesting that the story chose to borrow from Batman v Superman: Dawn of Justice’s Doomsday fight in having Superman be stabbed by one of Doomsday’s bone shards as opposed to just being killed by the sheer force of the blow to kill Doomsday.

Final Thoughts: An entertaining and faithful trip adaptation of a classic storyline.  This makes me very excited to see what will happen in the second half of the story this winter.

Editor’s Note: The Death of Superman is now available on Digital HD, DVD, and Blu-ray. You can order your copy, and help support TBU in the process, by heading over to Amazon.