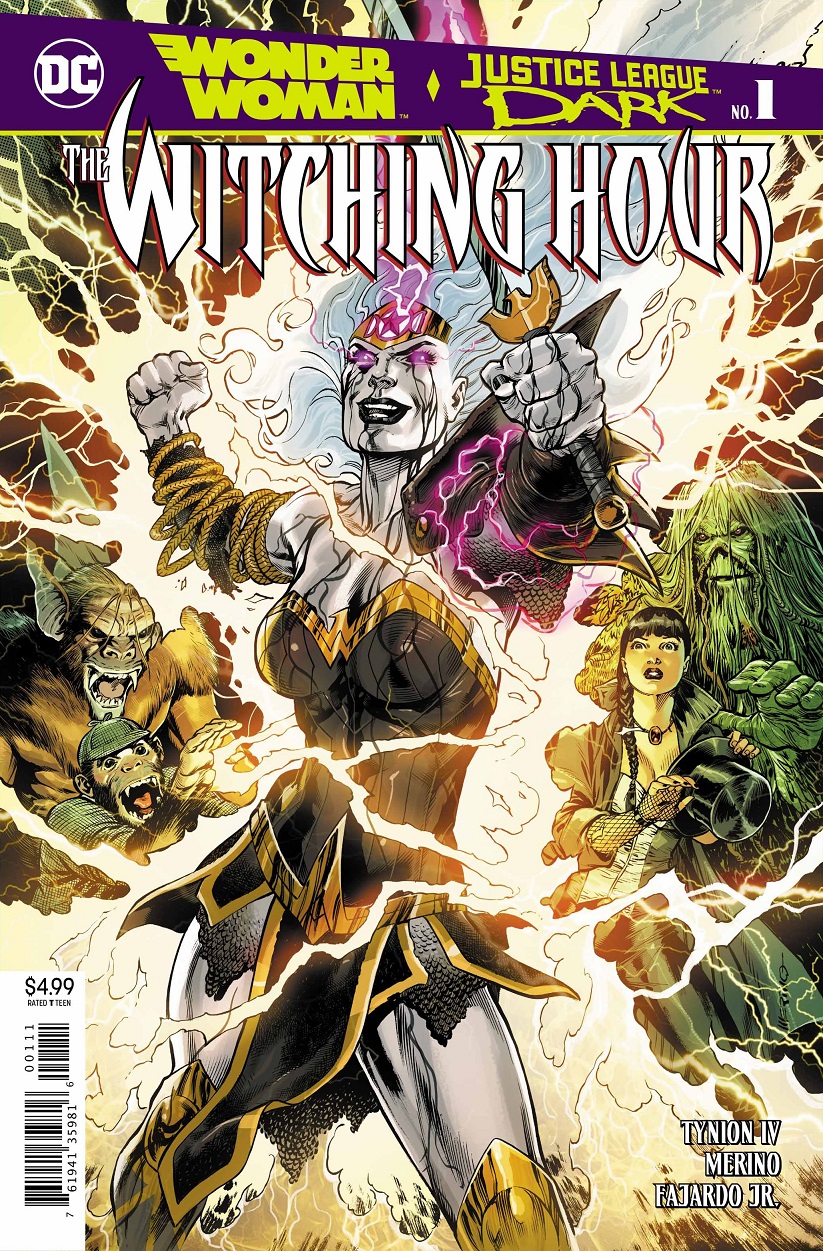 Editor’s Note: TBU does not typically review crossovers outside of the main Bat-Books, because simply put, there is a lot of them. However, since this story piqued the interest of the normal reviewer of Justice League Dark, they felt necessary to cover this one-shot dealing with the Wonder Woman crossover.

Synopsis (spoilers ahead): In Themyscira years ago, Diana runs away from witches deep within the murky forests. She prayed to the gods for deliverance, but deliverance did not come for the Witching Hour was upon her. The three-headed witches chanted “He-ca-te” multiple times as they chase Diana. As she fell on the forest floor, the witch goddess approached with the branding iron in hand. The lasting memory of that night was intense pain.

The next morning, all the witches stood in front of Queen Hippolyta to answer for what they had done to Diana. These witches stood and proclaimed they helped little Diana find her way home. Diana, now placated, leaves the court, but Hippolyta demands these witches to stay. She knows they did something to her little girl. She probes deeper into their defense, and they hold firm to their positions.

In the Hall of Justice, Martian Manhunter calls a meeting of the Justice League. Diana and Zatanna apprise the League of the current state of their investigations into magic. Zatanna conjures an image of the Upside-Down Man, the face of their enemy. Diana shares he is the face of the cosmic horrors, The Otherkind. He had the power to turn Swamp Thing into ash, turn Detective Chimp into a puddle of flesh, and pull the demon blood out of John Constantine. His power is immense. She also informs them of another threat, Dr. Fate. He is the reason the Otherkind are coming to Earth.

John Stewart tells the League he will seek the Guardian’s help in this matter. And, Aquaman shares he will ask the Silent School for their help. As the meeting adjourns, J’onn asks Zatanna to stay behind. Bruce tells Zatanna he has never seen Diana like this – afraid. He knows there is something they are not telling the League, and he knows they have their reasons. But, he needs to know if Diana is up to this challenge. Solemnly, Zatanna shares “she hopes so.” With Zatanna having left the meeting, Bruce turns to the rest of the League and asks “Who else is concerned?”

Zatanna catches up with Diana and asks why she had not shared with the League this powerful source of magic which resides in her. Diana states since they do not know much about the power, it is not the appropriate time to inform them.

The goddess, that the witches of Themyscira serve, wipes the minds of the Justice League regarding Diana’s and Zatanna’s update.

In Detective Chimp’s bar, a gathering of witches across the cosmos gather to practice their magic. The goddess inhabits one of the witches and burns the rest of them alive.

As the Justice League Dark entered their headquarters, the witchmark now appears on Diana’s forehead and she glows white with power. The goddess now appears to the team, and Zatanna immediately recognizes her as Hecate, the goddess of magic. She states her father taught her to pay homage to her when she was a little girl. Detective Chimp runs upstairs and pleads for the Justice League to help, but Hecate makes it to where the League does not recognize his presence.

Swamp Thing gathers the team and takes them into a closet, which happens to be a back entrance to Detective Chimp’s bar. As the team settles in, they walk into the main area and sees the charred bodies everywhere. John Constantine sits alone – traumatized by the carnage. He shares they are all going to die – for The Witching Hour now has begun.

Analysis: I have read other reviews which said this issue was boring. I have no idea why they think that. The Witching Hour is so good. This issue picks up where Justice League Dark #3 left off. We learn where this power within Diana comes from.

Hecate is a goddess in Greek mythology of magic, witchcraft, sorcery, and necromancy. According to the Encyclopedia Britannica, Hecate was represented as single-formed, clad in a long robe, holding burning torches; in later representations, she was triple-formed, with three bodies standing back-to-back, probably so that she could look in all directions at once from the crossroads. Otto Seemann states in his book “The Mythology of Greece and Rome”, Hecate was generally represented as three-formed. This has been speculated as being connected with the appearance of the full moon, half moon, and new moon. It only makes sense for a goddess of witchcraft to be worshiped by this cult of Amazonians.

In comics, it is thought the Greek Pantheon, although immensely powerful, are not the most powerful beings in the DC mythos. If the Otherkind, including the Upside-down Man, are as powerful as they appear since they are warping magic and crushing DC greatest magicians and sorcerers, then how can Hecate stand against him? Surely they would overtake her. But, her power (residing in Diana) is able to push him back to his realm.

This issue leaves us with a few questions: What is the witchmark? How is Diana related to Hecate? How powerful is Hecate? What is Hecate’s endgame?

The art in this issue is incredible. Jesus Merino’s meticulousness is seen on each page. With the craziness of magic, he brings Tynion’s vision to life. To me, Romulo Fajardo Jr. is in the upper echelon of DC colorists. In every story I have read where he is the colorist, the colors give life to each story.

Final Thoughts: Crossovers are hit or miss for me, but the first issue of The Witching Hour is a strong start for this crossover.