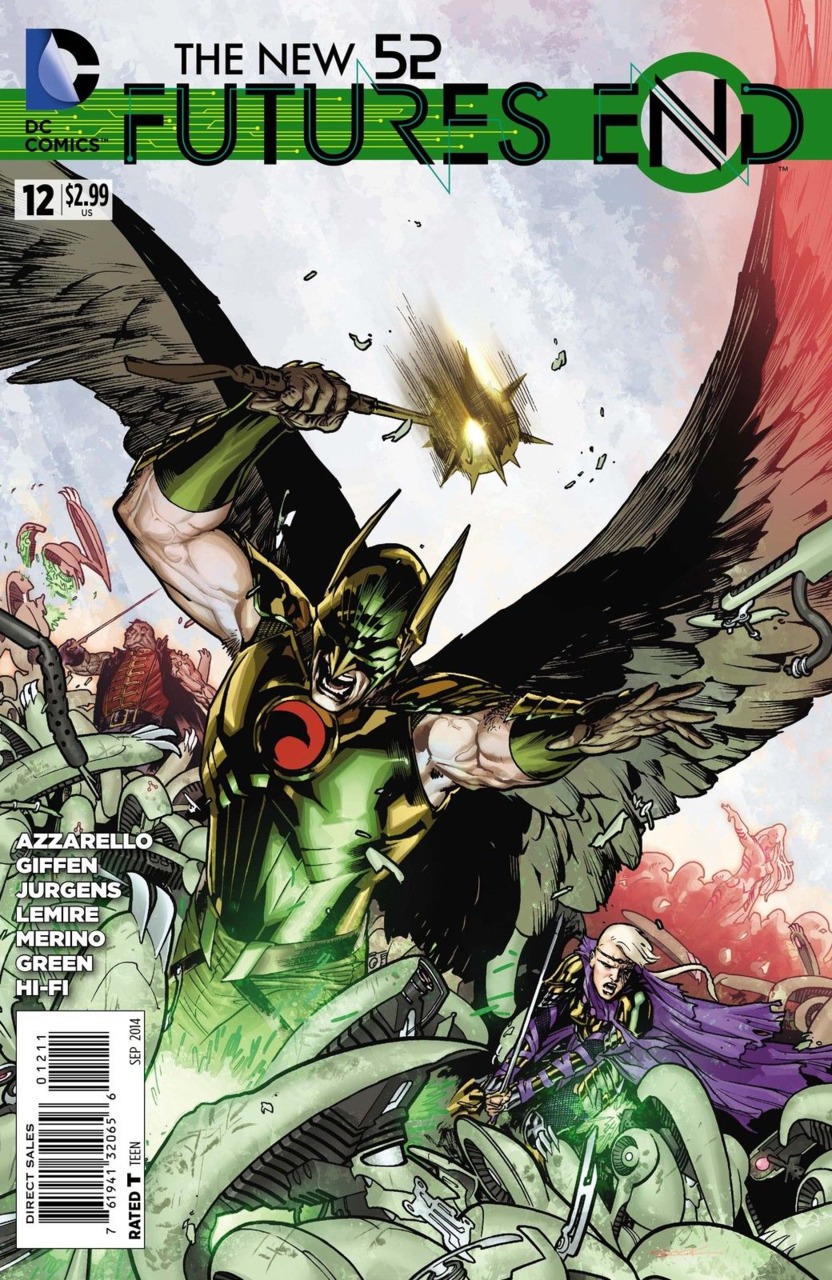 Since the beginning of Futures End, I haven’t been completely sold on what I’ve read so far. When I heard about it, initially, I was excited because I love Brian Azzarello & Jeff Lemire’s writing. I was sure it was going to be great. But twelve issues in & their stories are the only ones I seem to be interested in. Everything else, I have little reason to care. Hopefully that’ll change, but as of now, I’m not into this weekly, like I am with Eternal.

There are five stories in this comic, and the first one by Lemire is okay. The last one by Azzarello has really caught my attention, and shows the 35 years later dystopian future that we are trying to prevent. This is the first time we’ve seen this timeline since the #0 issue on FCBD.

The art in this series is still alright. It’s nothing spectacular, & there’s nothing that really stands out. Jesus Merino is on for this issue. But like I’ve said before, Hi-Fi on colors is doing a solid job keeping the tone & feel from each issue consistent. The cover by Ryan Sook looks really cool, as have all of his covers, and this is the scene we actually open with.

Frankenstein, Hawkman, & Amethyst don’t know where they have crash landed. They are met by these robot drones. Frankenstein tries to give them a pleasant greeting, when the drones begin to attack them. Our heroes fight back, and a drone scratches Frankenstein’s face, causing him to bleed. Apparently, this is something new, and it’s yet to be determined why. Is it because of the drone? Is it the bonding of Hawkman’s arm? Who knows. The team then spot Engineer, Hawkman’s teammate from Stormwatch. She is unresponsive, though, and attacks them. The loose signal with SHADE.

Faraday is talking to a woman, who I thought was Harper Row (5 years from now), he calls her Courtney, she says her name is Mercy… I don’t know. I feel like I’m missing something here. I’ve looked around to see if any other reviews understood this scene, & nothing. Confusing stuff. Don’t get it. Anyways he threatens her. She seems to possibly have powers maybe, kinda? And he has a sniper take a shot near her head, because he can & he leaves. She talks on the phone with someone, & I don’t know what’s happening.

Justin is still with Voodoo. Just in case you forgot about that from last week.

Ethan… I’m assuming Boyer? (The guy superman was looking for in #10) is with a hulked out woman called Rampage… But she hates being called that. Her name is Kitty, and she broke him out of jail so he can turn her back to normal. He straps her down, hooks her up, and turns on the machine, which seemingly explodes & kills her as he goes to a part.

Now for the best part. Thirty-five years from now, we see an aged Joker being fed by a machine. Robot Frankenstein, robot Gorilla Grodd, & robot Lobo open his cell, telling him that he needs to come with them. Brother Eye has plans for him. As they walk through Arkham Asylum, we see Two-Face, with his good side replaced with robot tech. They take Joker to the back room for “surgery”, where they have old, one armed Bruce strapped to a table…

Woah. What’s happening here? Are they going to merge the two? Scary stuff, you guys.

Although the issue was weak overall, the last bit carries the whole issue for me.