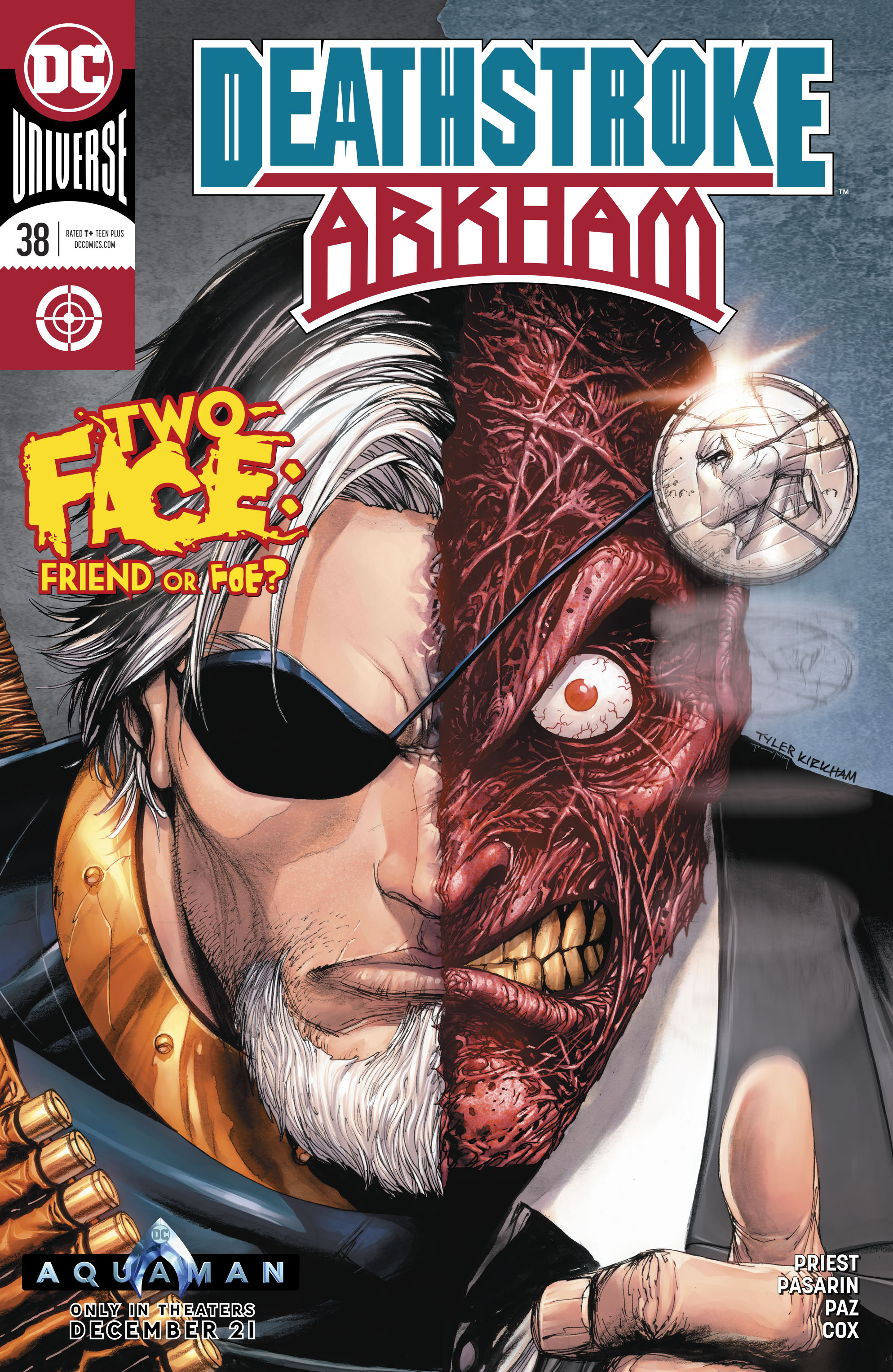 Overview: As Slade, Joseph, and Rose face mounting challenges all over the world, surprises await them all!

Synopsis (spoilers ahead): An old couple is awakened by the terrifying ramblings of someone who claims to not be insane. However, he appears to have gotten the wrong apartment. Finding Hosun’s apartment, he launches into the same speech, but Hosun interrupts him. Introducing himself as “Death Masque,” the two exchange information, with Masque suggesting that Hosun, not Dr. Ikon, put the artificial Wintergreen in Slade’s head. Hosun doesn’t deny it, and Masque reveals himself as Dev, from Slade’s previously believed hallucinatory intergalactic adventures.

Meanwhile, Slade fights the Arkham guards, losing because his powers are suppressed. They leave him unconscious and bloody on the floor of his cell.

In Minneapolis, Slade’s son Joseph wakes up as Wintergreen tells him that Two-Face shot him with one of Slade’s non-lethal knockout bullets.

In Vietnam, Two-Face and Rose fight viciously in a rice paddy. Two-Face easily evades her attacks, claiming that his training by Batman supersedes her training by Nightwing and that he’s brought her home.

Slade’s doctor comes to his cell, taking him on a walk. She lectures him about the state of mental health and criminality in America. She also observes that even depowered, Slade could have escaped, and that he both wants something from her and likes her. He insists that he and Dev had an interplanetary adventure, despite her denial.

Back in Minneapolis, Joseph flies Wintergreen to the airport, where Wintergreen declares that to stop Two-Face, they must break Slade out of jail.

In the meantime, Two-Face and Rose continue fighting, with Rose getting the worst of it. Two-Face claims that he wants to help Deathstroke become a better killer by removing his children, Slade’s greatest weakness. Rose asks why he didn’t kill her in Minnesota, and he says that the scarred coin let her live. He then theorizes that instead of being possessed by a 3000-year-old Hmong warrior princess, Rose has a second personality based on her childhood with her mother. As Two-Face leads her through the jungle, they come upon a group of Hmong armed with swords.

As Slade attempts to remember where the alien beacon calling the enemy empire he and Dev fought is in Arkham, he believes he remembers it somewhere in Gotham. He promises to come back, saying he never breaks his word. Shaken, the doctor leaves him, and one of the patients milling about says that Slade tried to kill Batman, giving him a flower and starting a chant of “One of us.” The other patients surround him, grab him, and carry him in mosh-pit style to Dr. Strange, where the doctor is apparently working with Hugo, Two-Face (both here and in Vietnam), and a whole crowd of villains.

Analysis: In part three of Deathstroke: Arkham, writer Christopher Priest continues his examination of Deathstroke and his deeply messed-up family. Whereas the first issue of this arc, titled “The Republic,” showed Slade grappling with the idea of being a Just Man from Plato’s famous philosophical text, the second, “Twenty-Three”, showed the passage of time. This issue, titled “Community”, shows all three members of the Wilson family – Slade, Joseph, and Rose – forced to make hard choices when confronted with failures in their own plans, to compromise with other people to achieve their ends. Slade finally shows vulnerability to his therapist in Arkham – which may be ill-advised, considering the final page showing her in the league of villains, Rose seems to be tempted by Two-Face’s offer to help her with her Willow problem, and Wintergreen confronts Joseph with the necessity of freeing his father, the last thing he wants to do.

Fernando Pasarin’s previous work for Justice League and Batgirl left me extremely cold towards his distinctive round faces and often awkward anatomy. However, in this book, his fight choreography and use of panels are quite engrossing. The battle between Rose and Two-Face in the Vietnamese rice paddy is stunning, starting with Two-Face seemingly alone in a beautiful field, then Rose attacking him in a stunning flying kick. Though series regular Carlo Pagulayan’s art tends to be more immediately appealing, Pasarin’s knowledge of action layouts provides really excellent momentum and enjoyment in Priest’s spare but consistent employment of at least one action scene per book.

Pasarin really impressed me in this issue. The repeated images of Slade on the floor of his cell, and especially the fight between Rose and Harvey in Vietnam is gorgeous. Jeromy Cox’s colors and Jason Paz’s inks continue to provide a sense of visual continuity despite the shifting artists. And Pasarin provides a detailed view of the Minneapolis/St. Paul airport, which as a Minnesotan who just flew home for Thanksgiving, makes me quite happy.

Priest and his team continue to provide one of the twistiest, most convoluted, and emotionally engaging books on the stands every month, and this issue is a masterwork of construction. Despite not resolving any major conflicts, as we’re probably only to the midpoint of the arc, this issue both satisfies and leaves you eager for next month’s installment, just as a great comic should.

Let me know what you think on twitter @ibmmiller, or join the conversation in our Discord!

Final Thoughts: Priest continues weaving an intricate tale of shifting realities, motivations, and betrayals, as Deathstroke and his family are dragged to the far ends of the earth.