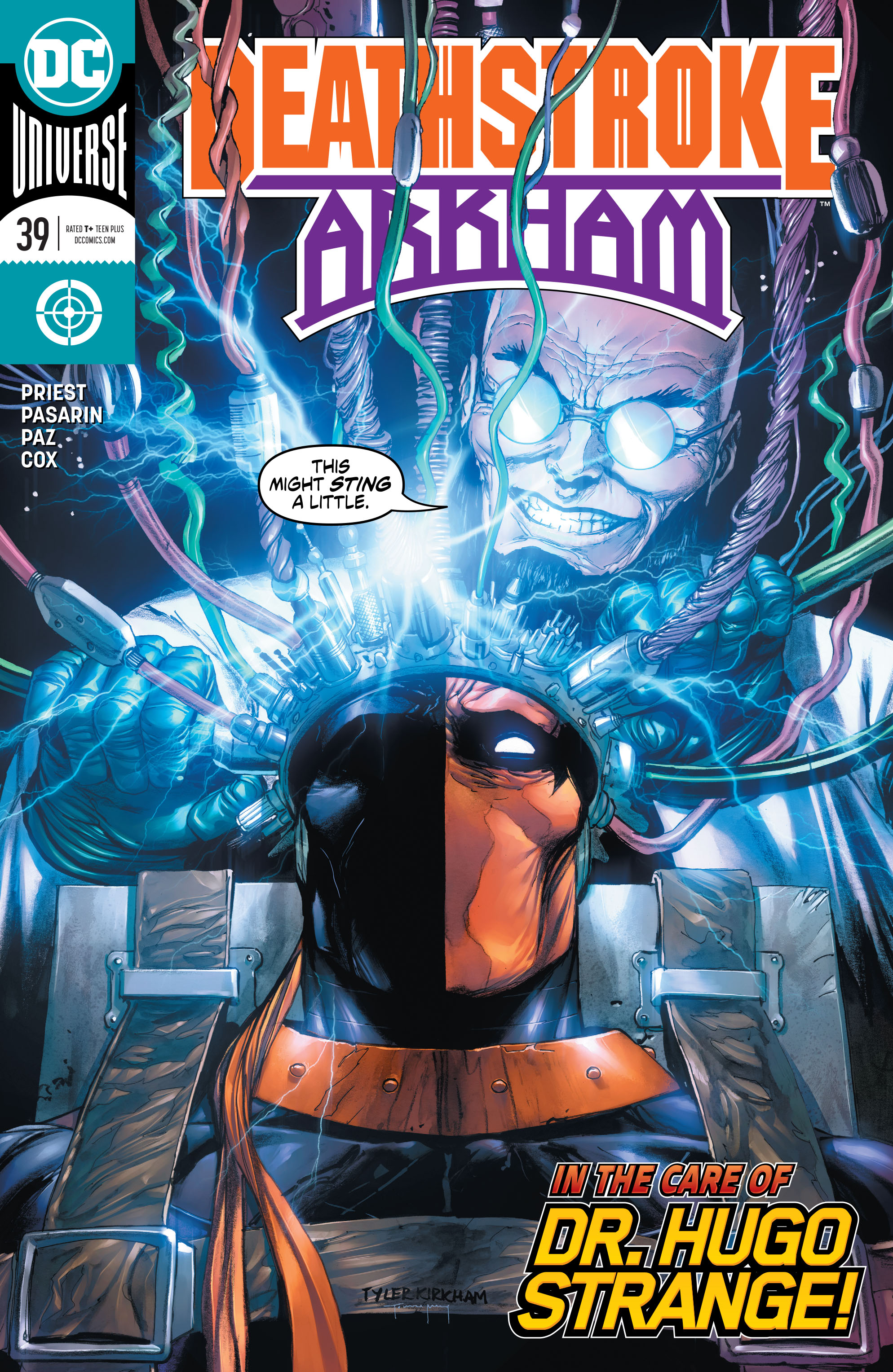 Overview: As Dr. Strange reveals his part in Deathstroke’s last three weeks at Arkham, his family and “friends” converge on the Asylum as well.

Synopsis (spoilers ahead): Devon, Deathstroke’s fellow Arkham inmate, now calling himself “Death Masque,” recounts the epic battle against the alien Pulorian race to Hosun, Deathstroke’s former tech guy (and currently married to Rose, Slade’s daughter). Because the Justice League wouldn’t take his call for help (both because he’s still locked in his cell, due to the time travel wonkiness of the Zeta Beam technology which teleported him to the distant galactic conflict, and because he’s, well, Deathstroke), he manages to use the same Zeta Beam technology to gather a large force of supervillains like Giganta, Grodd, Red Lion, the Royal Flush gang, Dr. Isherwood in his new monstrous form, Merlyn, Solomon Grundy, Black Manta, Deadshot, Reverse Flash, Mr. Freeze, Killer Croc, Dr. Light, and Damage.

Devon, being conspicuously strange and annoying as he and Hosun ride the bus, explains that the Zeta Beams also wiped everyone’s minds, except for his (because of the tinfoil in his underwear). As they arrive in Gotham, a police officer accosts them for Death Masque’s very real ray guns and swords.

Slade shows up for a therapy session with Candace, his doctor at Arkham, seemingly in the French Riviera, but really part of Arkham’s virtual reality therapy program. He asks her once again to let him out to stop the Pulorians, promising to return.

The scene smashes to Slade, lying curled up on the floor of his completely frozen cell, the wall completely smashed. Hugo Strange lets him know that he’s been given activated charcoal to flush the drugs suppressing his powers and mind out of his body. Strange leans of Slade’s sword, saying he’s a friend, as Two-Face stands behind him. Strange claims that he used a mind-altering drug on Dr. Destiny, allowing him to take control of the whole Asylum. Slade asks about Candace, and Strange points to the doctor suspended on a meat hook, saying that she represents his link to humanity, causing damage to his soul. His proposal – allow Mr. Zsasz to kill her, freeing Slade to be the best killer in the world.

In Vietnam, a Hmong elder examines Rose’s sword, which once belonged to a Hmong warrior princess, and was time-traveled by Slade from nine hundred years in the future to land in Rose’s hands many months ago. The elder believes that Rose isn’t possessed by the warrior princess, merely nuts. Rose storms out of the building, with Two-Face trying to convince her to work with the tribe to rid her of her “Willow” personality/possession.

Back in Gotham, Hosun and Devon sit in the back of a police car. Devon wakes up from his taser nap and uses his technology to eject the police officer from the car so he can find and destroy the Pulorian homing beacon which will lead their armada to Earth.

In Arkham, Joseph Wilson works with Wintergreen to break Slade out by taking control of Solomon Grundy’s body.

In Slade’s cell, Zsasz and Slade face off, with the tick-marked butcher seeming to gain the upper hand. Two-Face claims that everyone except Slade is under Strange’s control, but is shot by Candace, who croaks “What is real?”  Slade loses his temper, taking the knife from Zsasz, and throwing it through Candace’s heart, trying to break Strange’s control over his reality. Strange claims that the Two-Face who was just shot was merely a reanimated corpse and all of his manipulation of Slade was to fix him by removing his last connection to his humanity in killing an innocent who reminded him of the girl he loved like another daughter, Tanya Spears, the second Power Girl. Before Strange can gloat more, Joseph shows up in Grundy’s body, grabbing the villain, and throwing Slade his gear. Still questioning reality – especially since Joseph tells him that Rose was kidnapped by Two-Face, who he just saw shot through the head – Slade aims his pistol at Strange, just as Devon and Hosun crash through the front gate of Arkham in their stolen police car.

Analysis: In my review of Batman #62, I complained about the glut of reality-warping or bending stories that seem to have invaded comics (providing a somewhat self-indulgent list of the issues which were annoying me). However, like King’s issue, this comic provides an example of why the narrative technique of playing with the reader and the protagonist’s apprehension of reality is so attractive to a writer like Christopher Priest: it allows for both hilarity and deeply emotional tragedy. The horror Slade feels at killing Candace is matched by the anger Rose feels about her impossible situation in Vietnam for sincerity and effect, while the ludicrous alien invasion plotline (and constant Deadpool jokes) of Devon’s odd-couple road trip with straight-man Hosun provide a real question about what the stakes of this completely bonkers story are. Next issue, hopefully, we will get some answers about the two Two-Faces, whether Rose can be free of her compulsion to run around in strange outfits at night, and, of course, the alien invasion. All of these plotlines are juggled expertly by Priest and his artists, but the issue does present a challenge even to the experienced reader of this run, requiring multiple reads to really figure out how everything fits together.

As befits a writer of Priest’s craft, he also weaves his thematic preoccupations with this run into this literally crazy collision of stories. Hugo Strange manipulates Slade into a near-total rejection of his attempts to walk a less destructive path in killing Candace, and Slade’s reaction to that murder, and how it will affect his relationship with his children, ex-wife, and Wintergreen will no doubt be severely adversely affected. Rose’s journey provides a strong mirror image of Slade’s – while Slade loses more and more of his humanity, often by his own choice, Rose loses her ability to choose because of the mystery of her “Willow” personality/possession, leading her down the dark path of death. The optimistic reader hopes that Rose will choose the path of righteousness and reject the violence that Willow and her father embrace – but Rose has chosen to reject any firm commitment to good or evil the entire series, leaving her path forward extremely unclear, especially with her relationship with Hosun clearly at a breaking point.

Series main artist Carlo Pagulayan returns briefly for part of this issue, providing some truly lovely splash pages of Deathstroke and Devon’s battle against the aliens, as well as a nice series of reaction shots of the Justice League to Slade’s call for help. Fernando Pasarin continues to provide most of the main art for this arc, ably assisted by inker Jason Paz (and others) and colorist Jeromy Cox. Cox embraces the blacks, instead of relying on too many blues and grays, which greatly enhances the linework by Pasarin, which can be a bit drab when not colored with an eye to strong contrast, as in his Batgirl run.

Dave Johnson provides a substitute variant cover, replacing Francesco Mattina at the last minute, possibly because of claims of uncredited copying. The image – a two-tone picture of Deathstroke deflecting bullets with his sword – is reasonably exciting, but doesn’t really provide much of a splash. Tyler Kirkham’s main cover does connect strongly to the thematic conflict between Strange and Slade in the issue.

One more issue wraps this arc up, rounding it out at five issues. Deathstroke #41 provides a transition/prologue to the Teen Titans crossover with the ominous title of “The Terminus Agenda”. Hopefully, that doesn’t signal the end of any beloved characters! This crossover will likely last at least through issue 43 or 44, as crossovers are almost always at least four issues long (as seen in The Lazarus Contract), sometimes six (as in Night of the Monster Men). After that, we have six to seven issues to issue #50, which we believe will close out the series (as indicated by a panel discussion between Priest and Dan Didio in which Didio promised to keep Priest on the book that long).

Final Thoughts: All of the plotlines begin to collide in the penultimate issue of “Arkham.”