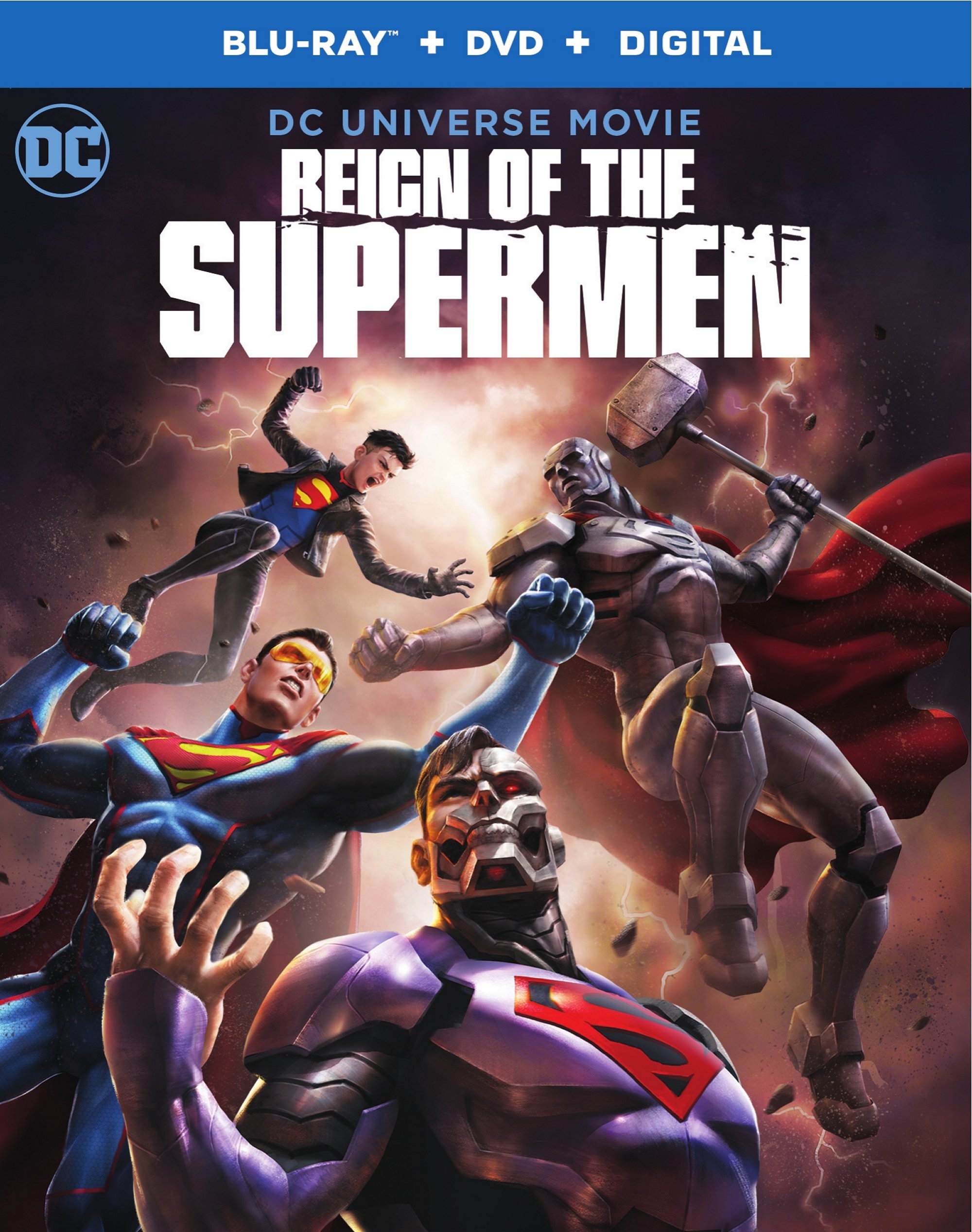 Synopsis (spoilers ahead): The film follows Lois Lane as she comes to terms with the death of Superman as she sets off to investigate the appearance of four mysterious Supermen, each claiming to be the resurrected genuine article.  The film then follows the appearance of Superboy, the Eradicator, Steel, and Cyborg Superman as they are each revealed to be frauds.   The real Superman, complete with mullet and black suit, appears in the final act, having been resurrected by his Kryptonian guardian, the Eradicator, to face off against Cyborg Superman, who has been empowered by Darkseid to destroy both Superman’s reputation and the world.

Analysis: Reign of the Superman is the second half of Warner Animation’s adaptation of the massive Death of Superman event that ran in the comics from 1992 to 1993.  Sam Liu returns to direct the second half of the story from a script by Jim Krieg and Tim Sheridan, which provides the film a good sense of continuity from the previous film.

It’s funny how the first time that Warner Bros. adapted the Death of Superman in animation back in 2007 with Superman: Doomsday, the biggest complaint that was levied against the movie was that it was so far removed from the source material, that it didn’t seem like the same story.  This time out, the creators clearly went out of their way to stay as close as possible to the source material, which I think actually works against the film.

Don’t get me wrong, I like the idea of a Superman film where the main character is Lois Lane, not Superman and the start of the movie does a great job of setting up Lois as a woman dealing with a terrible loss and you really do feel Superman’s absence at the start of the film in a way that feels very personal. Voice actress Rebecca Romijn sells a strong, smart yet vulnerable Lois that fits this story well.  I also enjoyed how the film uses some elements from earlier films, like Superman and Wonder Woman’s brief relationship, and mines them for enjoyable character moments like Lois and Wonder Woman’s meeting in the film.

Where I think the film goes off track is that it tries to be a little too reverential to the four “Supermen” in the film, which bogs it down in details that I don’t think the film has the time to really explore.  The film takes gives so much time to Superboy, Eradicator, and Steel, along with Cyborg Superman’s villain plot, and by the time Superman actually does return, it feels like it comes out of nowhere.

In the mid 90s, Kevin Smith was hired to adapt The Death of Superman into a feature film (which on a side note featured a cameo appearance by Batman).  The script was then heavily rewritten under director Tim Burton and was ultimately canceled, but Smith’s original script is still pretty easy to find online.  In that script, Smith chose to streamline the story to something of a buddy comedy between a resurrected, powerless Superman and the cold artificial intelligence of the Eradicator. In that script, Superman learns to be a hero without his powers before regaining his abilities through the sacrifice of the Eradicator, who in doing so, learns the value of human life.  While Smith’s script is far from perfect, I think that an approach that was more focused on Superman having to earn his return to the world would make for a far more satisfying story then what’s presented here.   As it stands, it feels a little like the movie forgot that Superman has to show up in this movie.  I know that’s what happens in the source material, but that doesn’t seem like a good enough reason to structure the movie this way.   In following the source material too closely in this instance, I think that it leads to a film that doesn’t completely hold up as a movie in its own right in the way that the previous film was so successful.

The character who gets the biggest focus in this story is its villain, Cyborg Superman.  Now Cyborg Superman is a character like Boba Fett, where I think that most of his popularity comes from that fact that he looks cool, especially in the post-Terminator 2 mid-90s.  The thing is, that looking cool is really the only thing that’s interesting about this character.  The film follows Hank Henshaw’s doomed and vengeful astronaut, who for some reason turns himself into a doppelganger for Superman, in this version with the aid of Darkseid, who is a smart substitution for Mongul in the original story.  There’s nothing presented in the story as to why he would come back as a cyborg as opposed to a fully formed Superman imposter, except that he has to because the story demands it.  I think that a little more thought should have gone into developing the origin of this character.   It would have made for a more satisfying reveal if Henshaw showed up in the film as a fully formed Superman, and then as the film when on, slowly revealed that under his flesh was machine parts as he puts his plan into place.   This is also a film with a room full of botched Superman clones and it would have been easy to have Darkseid put Henshaw’s consciousness into a reanimated, half machine, clone of Superman. I also think that Henshaw’s rage at Superman feels a little too unreasonable to be taken seriously and I think that Superman should have played more of a role in the death of his wife to earn Henshaw’s rage and give the character more relatable motivations.

Superboy gets a decent amount to do in the story, and I like that the film seems to be intentionally avoiding a more established version of this character on Young Justice.  I also appreciated that they lean into how very 90s the look of Superboy is by having Superboy having been fed a diet of bad 90s sitcoms as he was being grown in a lab.  I do feel that Superboy does come across as a little bland, which I think comes down to voice actor Cameron Monaghan, who does great work elsewhere in shows like Shameless and Gotham, but here lacks energy and feels miscast.

Steel is well executed and well performed by Black Lightening’s Cress Williams, but doesn’t really have a lot to do in the story and his involvement here seems perfunctory, as was the Eradicator who after watching the movie twice I still almost forget was in the movie.  Neither character in this film really seems to have an arc in this film to follow, and in a story that was spilt up to accommodate all of these characters, it’s a shame that we don’t get more from them.

The film is well animated and the action set pieces are well staged.  I still find myself wishing that they would move away from the aesthetic they continue to use for these DC Universe Animated films.  There’s something a little off-model, particularly in the designs for Superman, Batman, and Wonder Woman and as the comics have shifted back towards classic looks for these characters, I can’t help but wish that these connected films would do the same.

Final Thoughts: As fans, I think we all appreciated it when the people behind the media that we consume take the source material as seriously as we do.  I can absolutely understand where the film-makers are coming from in trying to do right by one of the biggest stories in Superman’s 80-year career. But a film is not a comic book and there are things in long form sequential storytelling that just doesn’t work in as an eighty-seven-minute movie that has to be a satisfying film in its own right.   This movie is entertaining, and I enjoyed watching it, but I don’t know how often I’ll revisit it.

Editor’s Note: Reign of the Supermen is now available on Digital HD, Blu-ray and 4K. You can order your copy, and help support TBU in the process, by heading over to Amazon.