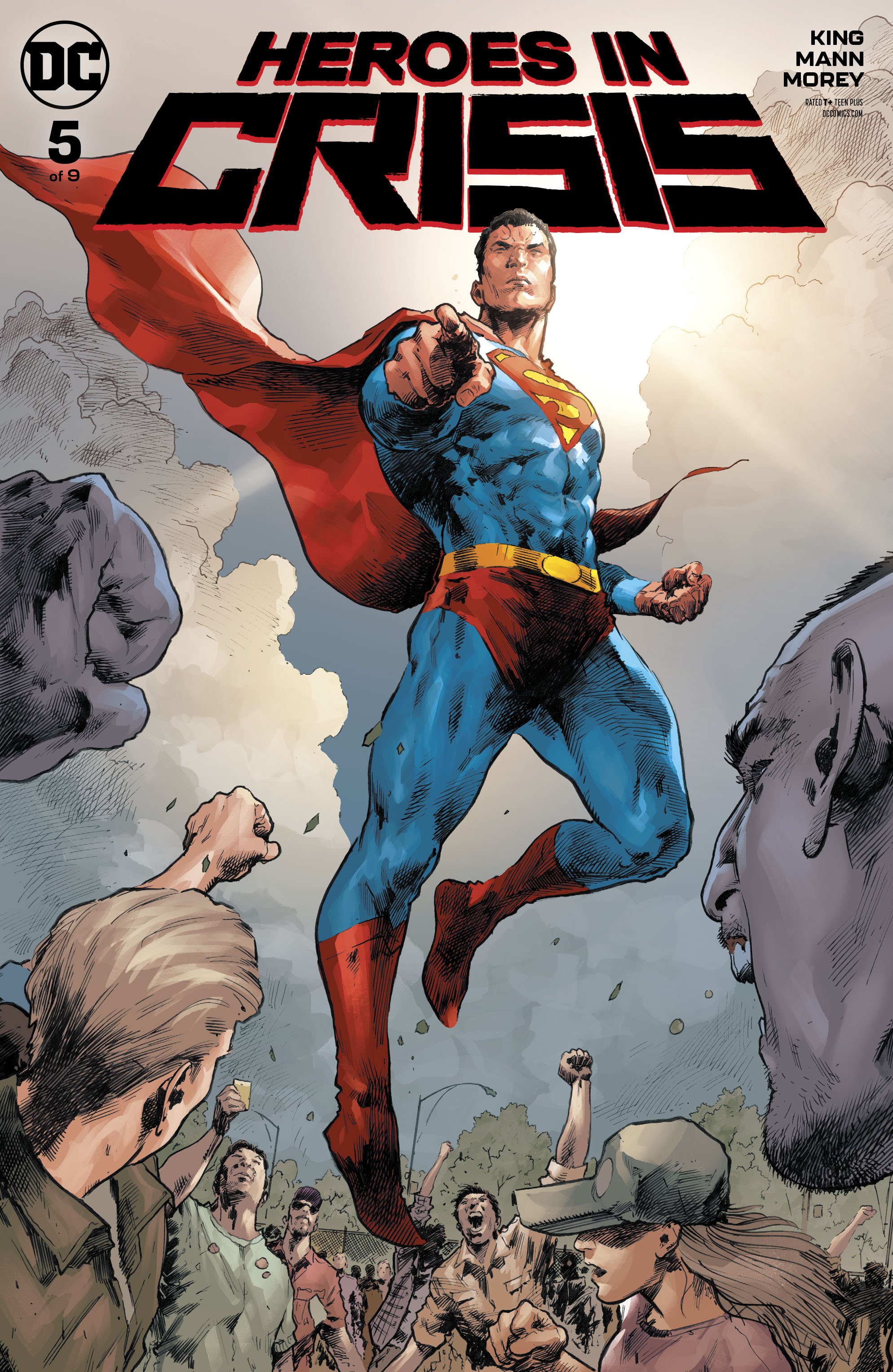 Overview: Superman and Wonder Woman address the public, Batgirl and Harley do some investigating, and Booster Gold and Blue Beetle try and execute the “dumbest idea ever” (their words!).

Synopsis (spoilers ahead): The issue opens into a session of Booster Gold in Sanctuary talking about his misadventure with an alternate universe Batman.

In the present, Booster and Blue Beetle have drinks and come up with a “dumb idea” to solve the murder case on their own.

We see a session Commander Steel had at Sanctuary about how he constantly dies and is reborn.

In the Batcave, Batman gives Skeets to Batgirl to investigate after he tried and found nothing.

At their apartment, Clark tries to type up a statement to deliver to the world while Lois tries to convince him to go to sleep.  Clark struggles to find the right words and expresses concern because he can hear how scared people are.

We see Solstice at Sanctuary trying and failing to control her power.

Batgirl takes Skeets to a playground and ties him to a slide.  She reveals that Harley will be the one doing the interrogating because she can be “bad” in ways that Batman and Batgirl can’t.

Booster Gold breaks into Flash’s lab and somehow manages to knock him out.

We see The Protector at Sanctuary talking about drug abuse.

Superman, with Wonder Woman at his side, delivers a speech to the world that is inspiring and reassuring.

Booster and Beetle try and solve the murders themselves.  Booster has a theory that the body of Wally is somehow five days too old.  As he mentions this, Harley and Batgirl find their hiding place.

An unknown figure with a red glove picks up a rose from Gotham Harbour.  Presumably the same rose that Harley threw into the water in a previous issue.

The issue concludes with Harley at Sanctuary talking about the domestic violence she endured at the hands of the Joker.

Analysis: The subject matter of this issue is very heavy stuff.  Not that the series has shied away from this in the past, but this issue takes the reader on a very emotional ride from start to finish.  It’s all very well done and I found the Sanctuary sessions with Booster and Harley to be especially good.  Booster using the blood on his glasses as a way to metaphorically talk about how some things can’t be unseen was brilliant.  Harley’s description of domestic violence was difficult to read because of how shocking and incredibly depressing the account of the incident is, but that’s why the page works for the dark subject matter.  Mann’s use of the nine-panel grid works really well to convey the emotion to the reader.

The real standout of this issue for me is Superman.  In one speech, King shows us why Superman is such a beacon of hope to everyone in the DC Universe.  The speech itself reassures people that they are safe, but also subtly and gently chastises people for thinking that their heroes don’t have emotions and problems like everyone else.  It’s a delicate balance that only someone like Superman can manage and Tom King writes it perfectly.  I also liked how we got to see different parts of the DC Universe while Superman was making the speech.  It reinforces the idea that the speech is meant for and applies to everyone.  The one thing I did not like about the speech is that Wonder Woman doesn’t say anything.  I understand why Batman is not there, but I feel like the speech would have been even better if both Superman and Wonder Woman talked.  But overall, everything Superman says in this issue is up there with some of the best Superman writing in the character’s illustrious history.  The scene where Clark was writing the scene was also excellent.  In one panel, Clark turns to Lois and says he can hear how scared everyone is of them.  Moore’s artwork does a wonderful job showing the stress on Clark’s face as he explains that the whole point is that no one should be scared.

While the issue does a great job exploring the psychological nature of heroes and what they mean to the public, the murder mystery aspect isn’t ignored.  While I’m not sure that Booster and Beetle’s plan would work, it does lead to one of the most important clues to this point.  Booster explains how the time travel police check to see if people are cheating and then mentions that Wally’s body is five days too old.  Given Wally is a speedster who can time travel, it’s a strong hint that Wally might be involved beyond being just a victim.  We also get a new mystery as we are left in suspense over who picks up the rose from the water.  Given the red glove, perhaps it’s Wally from a different time from the Wally who is dead?

The art in this book (and series) is nothing short of some of the best in any DC book right now.  Moore handles some of the pages in this book and his style meshes seamlessly with Mann’s.  Some of the highlights of the art are the double page where the title is worked into the scene of the apartment, the scene of Harley and Batgirl leaping off a rooftop with a beautiful building behind them, and the page with the dragon and a character I’m not familiar with (editor’s note: It was Shining Knight).  These are just a few examples, but the truth is you won’t be disappointed with a single page or panel in this book.  Morey’s colors set the tone on each page; from bright and optimistic on some pages to more subdued and melancholy on others.

Final Thoughts: Another great issue at the halfway point of this series.