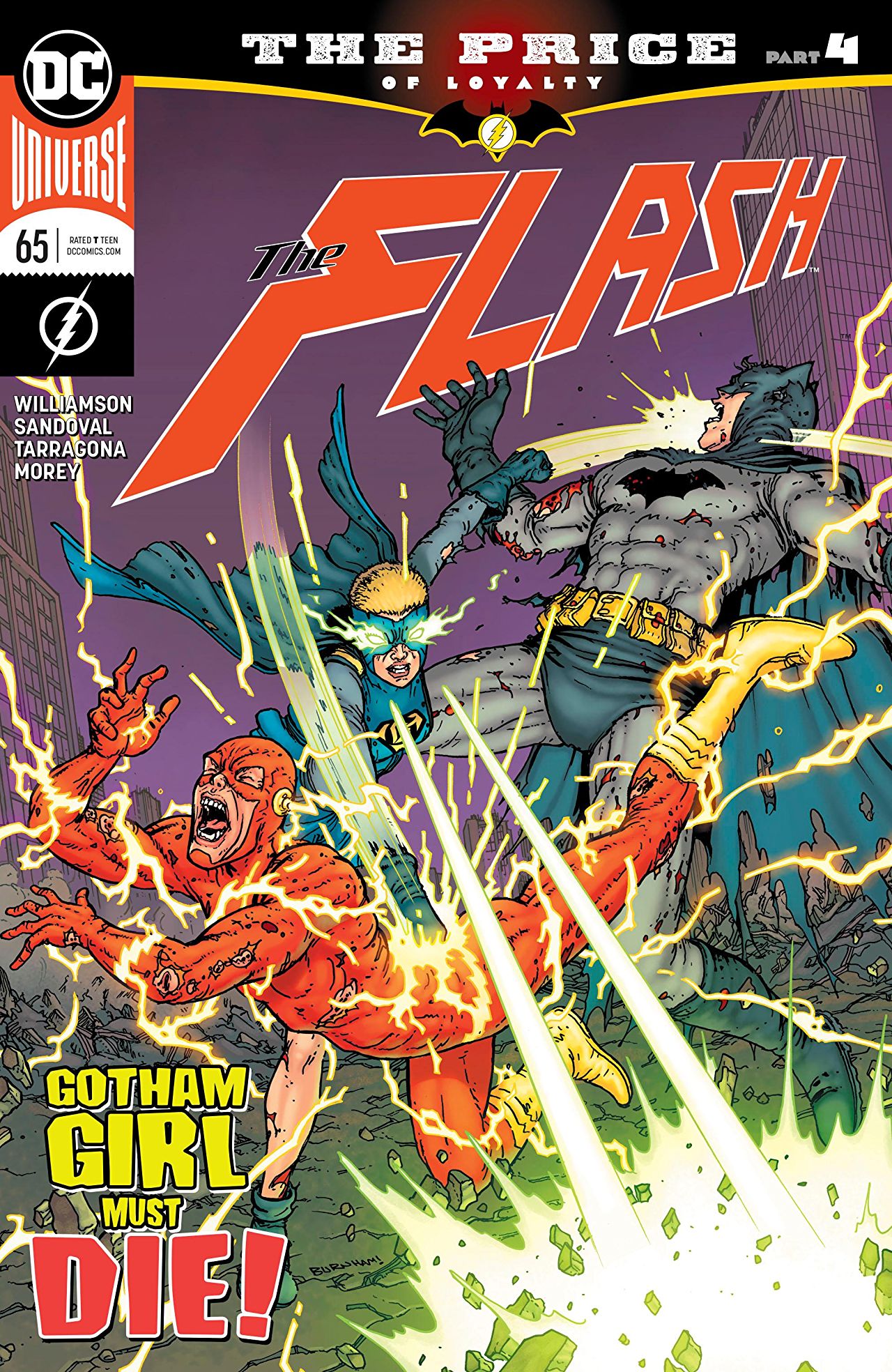 Overview: “The Price” concludes the confrontation between Gotham Girl, Flash, and Batman with dark promises for the future…

Editor’s Note: This issue is the final part of a four-part crossover between Batman and The Flash. The crossover started in Batman #64, then The Flash #64 and then last week’s Batman #65.

Synopsis (spoilers ahead): The title card reads “…at what cost…” as Flash narrates his memory of discovering Wally’s death in Heroes in Crisis. In the present, Flash and Batman struggle to save Central City’s residents from a super-charged Gotham Girl’s heat visions. The two heroes struggle to reason with Claire, trying to convince her that her rage is causing her to betray her own values, and her powers are killing her. She responds that without her powers, she is nothing, before collapsing, vomiting gray-green liquid as a reaction to the super-Venom drug that boosted her powers.

Batman and Flash desperately perform CPR on Claire, with Barry flashing back to Wally’s life and death – especially death. Losing his temper, he uses his super speed in compressing Gotham Girl’s chest, starting her heart again. However, expelling the Venom seems to have erased her memories of what she’s done for the past several days as well as stopped her rage.

Iris West crawls over the rubble and gives both heroes, but particularly Batman a piece of her mind, ending with a resounding slap to Batman’s face.

In the Batcave, they put Claire in suspended animation to help her heal and prevent her from killing herself with her powers. Barry and Bruce agonize about the price heroism brings to their lives – costing their allies pain, relationships, and far too often, their lives. Batman pushes a little too far, throwing that Flash forgot Wally for years (during the n52) in his face, and Barry pushes his speed faster than all of Batman’s countermeasures can follow, ending with a fully powered punch hovering just a centimeter from Batman’s nose. He refuses to unleash on Batman, saying “I’m not you,” and leaves.

Iris leaves Barry a letter containing her obituary for Wally. She also says goodbye, unwilling for now to pay the price of loving a superhero, leaving Flash, like Batman, alone.

Analysis: The final issue of the Batman/Flash crossover concludes with nothing learned about either the Heroes in Crisis event or Batman’s conflict with Bane, as it’s set in the middle of the former and before Batman learns of Bane’s involvement in “The Tyrant Wing”. As a result, the entire event ends up being more or less a “filler arc”, with no major changes to character relationships or status. Claire is in stasis, effectively out of the action…just as she has been for the past forty issues (since Batman #24, disregarding her cameo in Batgirl and the Birds of Prey). Batman and the Flash end the event at odds, and Iris leaves Flash, but these events likely won’t affect the ongoing status of either Batman or The Flash series that significantly. There is a chance that Tom King and Josh Williamson may use these events as elements in ongoing storylines, as we saw with Thomas Wayne’s Flashpoint Batman appearing as one of Bane’s allies after “The Button,” but the whole thing doesn’t seem to provide much more than a month off for Tom King to write a television pilot without affecting his ongoing plan for the Batman title.

A few nice character interactions, particularly for Barry, which is fitting for the Flash title, but on the whole, nothing much is said about the “price” that heroes and their families and loved ones pay for being heroes. It drives people away? It hurts people? We’ve seen this over and over again since the Killing Joke. The consequences for heroism often feel manufactured, with X sidekick character being trotted out to be maimed or killed since DC won’t kill most of its main characters. X sidekick spends some time out of action, but usually returns again (see Donovan Morgan Grant’s excellent article on death in Batman comics this week!), thus devaluing their pain and loss when it happens again.

Gotham Girl, the supposed focus for this crossover, ends in stasis. Her out of character actions and motivations are explained away as effects of the super-Venom, leaving her open for Tom King to bring back in his Death of Batman story promised in Batman #5. Hopefully, that integration will lead to a more satisfying conclusion than this tale.

Artist Rafa Sandoval’s work continues to be appealing, but a bit overly pleasant and smooth for the darkness and rough emotional edges this story calls for. The art team definitely turns in an A-list quality production, but suffers a bit in effect due to the disconnect between Guillem March’s more exaggerated, expressionistic figures in the Batman issues and Sandoval’s more “realistic” and appealing technique.

Final Thoughts: Though it contains a few nice character interactions, “The Price” ends much as did “The Button” – without progressing much forward or saying anything particularly interesting about its characters.