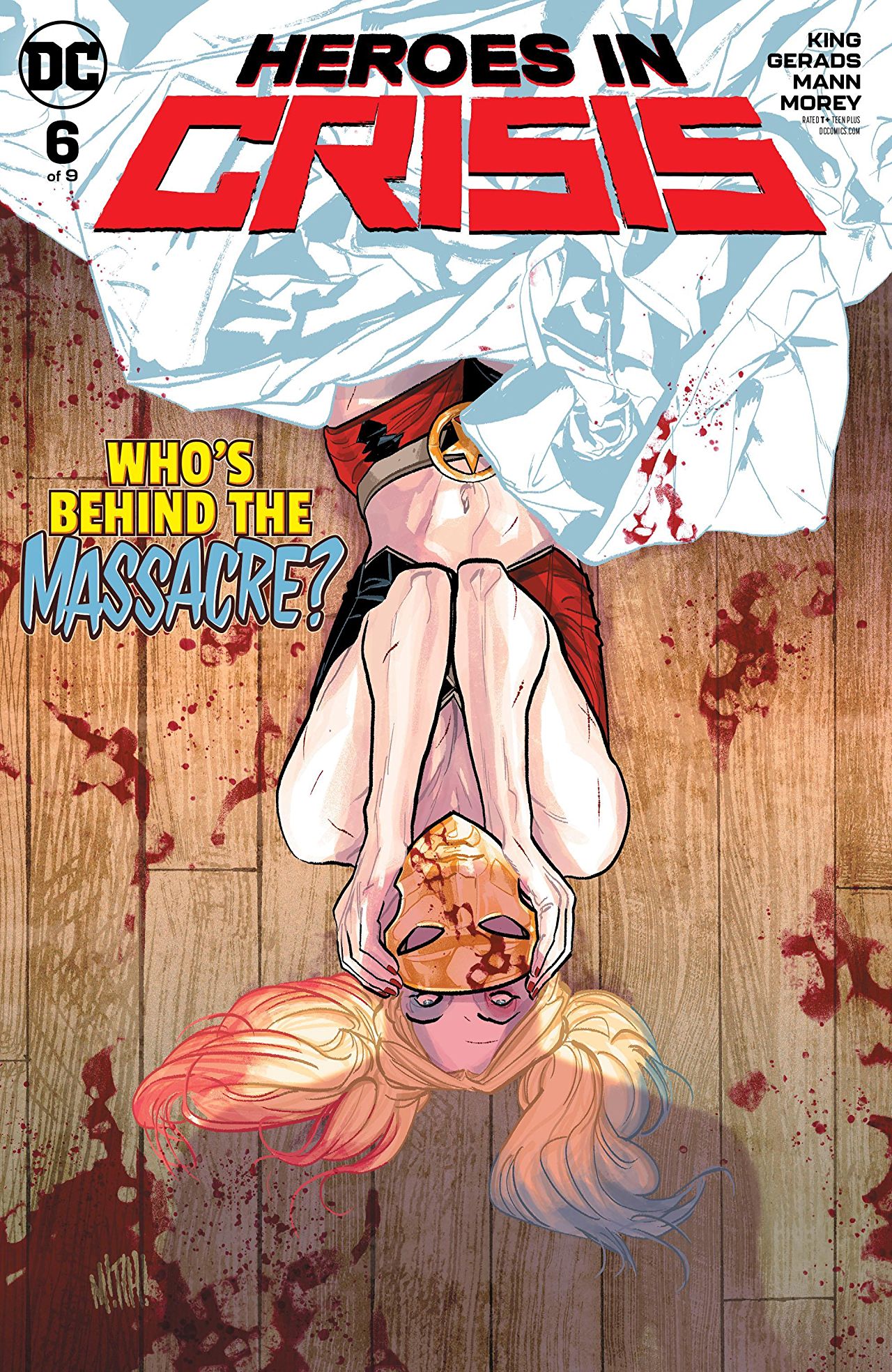 Overview: An examination of the psyche of some of the patients at Sanctuary as well as more information about the tragic deaths is told.

Synopsis (spoilers ahead): The issue opens with Gnarrk, Wally and Harley talking about what it means to be saved and to save people.

We see Gnarrk in a simulation in Sanctuary reminisce about the prehistoric world he belongs to by comparing it to a passage by Keats.

We see a flashback of the moment from DCU Rebirth #1 where Barry remembers Wally and embraces him.  Wally asks Barry where his family is.

Harley hangs out in Ivy’s room at Sanctuary before the tragic events in the first issue.

Gnarrk remains in a simulation at Sanctuary and this time tries to think about his past life within the context of Hobbesian theory.

There’s a flashback of Wally meeting Superman, Nightwing, Donna Troy, and Arsenal for the first time.  They are all happy to see him and call him “hope”, but Wally himself doesn’t feel that way.

Ivy lets Harley use the Sanctuary to try and work out her issues with Joker by punching an artificial construct of him.  It does not make Harley feel better.

Gnarrk now thinks about his past life from the perspective of Rousseau’s ideology.

Wally thinks about how he felt that he couldn’t be “hope” without his family.

Harley and Ivy talk about why hitting Joker didn’t work.

Gnarrk debates with himself about whether his old life or new life was better.

Ivy and Harley have fun in a field with killing artificial constructs of Joker.

Gnarrk reaches a conclusion with his own internal debate just as the alarms in Sanctuary go off.  Wally tells himself to slow down.  Ivy hears the alarm and leaves the chamber saying that she will be back.  Gnarrk dies in the field outside thinking of Plato.  Inside, Wally holds Roy’s lifeless body and says that he didn’t want to be alone.  At that moment, Wally appears to be shot through the chest by an energy pulse from Booster Gold’s ring.  Harley appears at the door in a moment seen in a previous issue.

The issue concludes with Commander Steel, Blue Jay, Solstice, Kid Devil, Hot Spot, Nemesis, Arsenal, Gunfire and Tattooed Man all answer what is presumably some variation of the question of “how many have you saved?” in sessions at Sanctuary.

Analysis: I recommend giving this issue a second read before forming an opinion on it because it may be hard to appreciate all of it on the first read.  I’m quite sure I still did not catch all the subtleties here, but I definitely appreciated it more on the second read.  The issue itself isn’t intended to be a happy one.  It’s one that will have you feeling a little off balance and perhaps questioning the meaning of life in a very philosophical way.  There are only a few new details in here about what might have happened at Sanctuary, but what is implied is more tragic than what many initially expected.

The standout for me in this issue is Gnarrk.  I confess I’ve never heard of the character prior to reading this issue, but his story is fairly straightforward; he’s a caveman who was literally frozen and then revived in the modern world.  Despite his humble beginnings, Gnarrk has clearly spent much of his recent history reading some of the best poets and academics in the Western canon.  Using their writing to express what he’s thinking, Gnarrk compares and contrasts his current life to his previous life.  My take away from Gnarrk’s ruminations is that we have collectively reached a point where we have the luxury to theorize about life in the way Hobbes and Rousseau have done, but perhaps this also means we miss out on the purity of living in the moment as the Keats poem describes.  The work of Hobbes and Rousseau is great and represents a form of intellectual progress, but as Gnarrk says, we may also be over-thinking and intellectualizing simple things because we need something to worry about or because we want to avoid confronting problems.  While Gnarrk’s thoughts are stimulating, King always connects it to other characters and plot threads in the story so it always feels like it’s adding to the story.  There are a few levels to what Gnarrk talks about in this issue and I can see people interpreting it in different ways.  I encourage you to share your interpretations in the comments below or on our Discord server.

The other standout is Wally West.  This issue showcases Wally at his most vulnerable and really gives us insight into what he’s been going through since returning to the DC Universe.  While this story does make me feel a little upset because it feels like a middle finger to the positivity the Rebirth era was supposed to be about, I can also recognize that this examination of Wally’s psyche is well done and makes logical sense.  Wally was supposed to be a symbol of hope and everyone treated him that way.  However, in their joy of his return, no one seemed to see how sad Wally was to return and not have his family anymore.  The way Gerads sets up the page with Wally hugging Superman and his fellow Titans perfectly captured this.  They are telling him how happy they are he’s back and what he represents to them, but because they are embracing him they can’t see the sadness on his face.  The lack of color and background here was a nice touch because it really gives the sense of Wally feeling isolated and alone.  Wally feels the pressure of their expectations; how can he be hope to so many people when he doesn’t feel that himself?  Ultimately, Wally’s feeling of isolation and depression over the loss of his family appears to motivate him to use the speed force to see them.  I use the word “appears” because we still need to wait for future issues to clarify what happened at the end of this one.  But it appears like Wally did something with his powers that went out of control and unintentionally killed people at Sanctuary.  It also appears that Booster saw this and killed Wally out of some misplaced sense of justice because he thought what Wally did was intentional.  The last few sentences are just me speculating on what happened, but if it’s true, it could be one of the most tragic sequences of events I’ve ever read in a comic book.

Harley is also featured fairly prominently in this issue, but unlike previous issues, her part seems a little disconnected from everything else that’s going on.  I appreciate her bonding with Ivy and I think it’s good that she’s working out her anger at the Joker but I didn’t really understand why she was in this issue.  Perhaps I missed something or it will make more sense when reading the next issue.

I’ve been a fan of Mitch Gerads’ art for a long time.  I loved his work in Sheriff of Babylon and more recently in Mister Miracle.  He continues doing amazing work in his first issue in this series.  He’s been working with Tom King for a long time and the two work really well together.  When a writer and artist are on the same page, it usually makes a fantastic book.  With a story like this, the most important thing to convey is emotion and Gerads does this with the posture of the characters, the facial expressions and the layout of the pages themselves.  A really great book all around.

Final Thoughts: A deep dive into the psyche of Wally West and Gnarrk.  Definitely an issue you don’t want to miss.