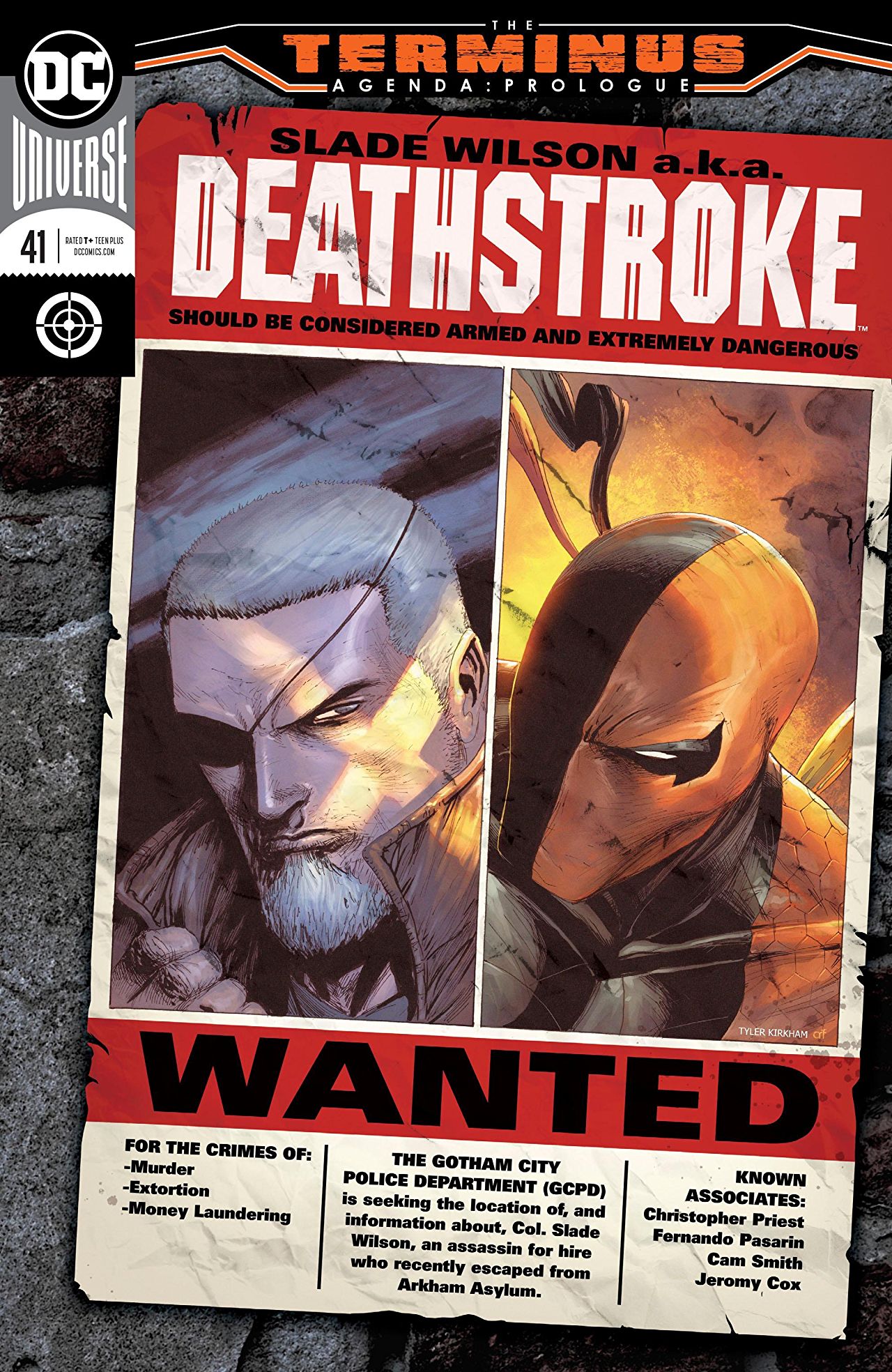 Overview: Deathstroke struggles to pick up the pieces of his life after escaping from Arkham, as a conflict with the Teen Titans looms.

Synopsis (spoilers ahead): In Gotham City, Deathstroke battles the Electrocutioner on a bus, while his true face as Slade Wilson is plastered on billboards after his escape from Arkham and murder of several apparent homeless men (though Deathstroke still believes that they were Pulorians, the evil alien invaders). Slade, unwilling to let someone who shoots at him live, corners Electrocutioner, telling him that he originally had a different target.

Half an hour later, Jim Gordon surveys the crime scene, then questions Wintergreen, sitting in the back of a police car.

We flashback to one of Slade’s therapy sessions with his doctor, Candace, who he killed believing her to be a delusion of Hugo Strange at the end of the last arc. Despite Deathstroke’s characteristic “fronting,” the warmth he feels towards Candace is clear to both of them.

Hours later, Rose Wilson, the Ravager, stands over her sleeping father in her Brooklyn apartment, cocking a pistol at him. He wakes and asks her to research his latest hit, looking for the reason someone wants his target dead.

In Gordon’s office, Jim continues to interrogate Wintergreen, who refuses to give straight answers about his work for Deathstroke. Gordon intends to persecute Slade until he’s caught, funded by Wayne Enterprises. Only one of the fifty tourists on the bus was killed – Deathstroke’s target, an elderly grandmother.

Rose, now in her Ravager gear, examines the scene in Gotham Square with Deathstroke. His recent escape from Arkham has spurred a Deathstroke craze, and cosplayers and people selling Deathstroke balloons (actually panhandlers Slade hired himself) provide perfect cover for him to walk freely in his own gear. Rose says her research on the woman Slade killed reveals she was clean, but points out a lead in Atlantic City.

On GCPD’s rooftop, next to the Bat-Signal, Gordon ponders the question of killing, even as an appointed state representative of the people. Wintergreen questions the distinction between Gordon’s relationship with Batman and his own with Deathstroke. Gordon admits the similarity, but points out that Batman hasn’t killed innocent grandmothers.

In Atlantic City, aboard a casino cruise liner, Slade and Rose, dressed to the nines, confront an old hitman, now a dealer at the casino. He insists he got out because he developed a conscience, providing a parallel to the difficulties in Slade’s own career caused by his love (however dysfunctional and buried under selfishness) for his family. The Electrocutioner interrupts, trying to wipe Slade out after Deathstroke let him go on the bus. Rose throws Slade’s sword into the villain, taking him out of the fight. She tells him that Hosun, Slade’s former assistant and her current husband, has confirmed that the casino dealer isn’t the target, and the innocent grandmother was the intended hit all along. Hosun tried to find out the name of the client, but only found a code name: “The Other.” Casino security tries to restrain Slade, but he throws them off, only for Electrocutioner to pull a gun on him. The casino dealer disarms Electrocutioner, then shoots himself out of guilt for his former life (and fear of more attention from Deathstroke and his rivals).

As Jim walks Wintergreen out of the GCPD, Wintergreen cagily says that he views his work with and for Deathstroke as a trap of conscience – attempting to restrain a man who could perhaps destroy the world. Before Wintergreen leaves, Jim asks if he’s ever heard of “The Other,” and Wintergreen stares at him, before bidding him goodnight and walking away.

In LA, Joseph Wilson, Slade’s living son, speaks with Robin, Damian Wayne. Joey attempts to persuade Damian to relinquish his plan to take Deathstroke down, but when Robin refuses, he gives Damian advice on where he can attack Slade without warning. To be continued in Teen Titans #28!

Analysis: After the mind-bending Deathstroke: Arkham arc, Christopher Priest brings his focus onto Deathstroke and Rose’s relationship – appropriate, as the book is headed straight for another confrontation between the World’s Deadliest Assassin and the Teen Titans. As Rose has been trained by Titans, and in other continuities even been part of the team, the renewed focus on her struggle between the desire for her father’s love and approval and her hope to escape his villainy fits the upcoming arc quite well. After over a year where Rose has donned the strange garb of the ancient Hmong warrior princess possessing her, it’s quite nice to see her in her Ravager gear again – though that gear itself symbolizes her moral struggle.

Slade himself struggles with the consequences of his life. In the span of days, he’s killed two innocent women (the woman on the bus in this issue, and his Arkham therapist), and possibly killed a handful of innocent homeless men (who might also be invading aliens). Throughout the run, Slade has never shown remorse for a single kill. The only death which disturbed him was that of Power Girl, Tanya Spears – and that led to his abandonment of heroism and descent into madness. With his identity as Deathstroke now made public knowledge by a furious Jim Gordon, Deathstroke contemplates two former villains hiding in retirement. It seems clear that Slade doesn’t see a way out of his current life – he can’t be good (as Defiance proved – simply “not being evil” isn’t a rejection of the selfishness that motivates him), he can’t quit, and he doesn’t desire death, since still has two of his children and his ex-wife alive.

Twice in this issue, the name of “The Other” shows up as a shadowy force behind the scenes. This double mention clearly signals a huge upcoming plot point – but will “The Terminus Agenda” crossover be similar to Deathstroke vs. Batman, where Slade and the Teen Titans face a greater threat playing them both against each other? Or is this a plot point coming after Slade and the Teen Titans face each other?

Artist Fernando Pasarin provides really nice layouts and action, though his faces still tend to be unappealing in their roundness and strange neck contortions. Colorist Jeromy Cox receives an assist from Carrie Strachan, and the two create strong, detailed, bright spreads overcast by an unsettling blue, giving the whole book a sense of real unreality and tension.

Final Thoughts: Priest and Pasarin masterfully bridge the gap between Slade’s Arkham narrative into his conflict with the Teen Titans.