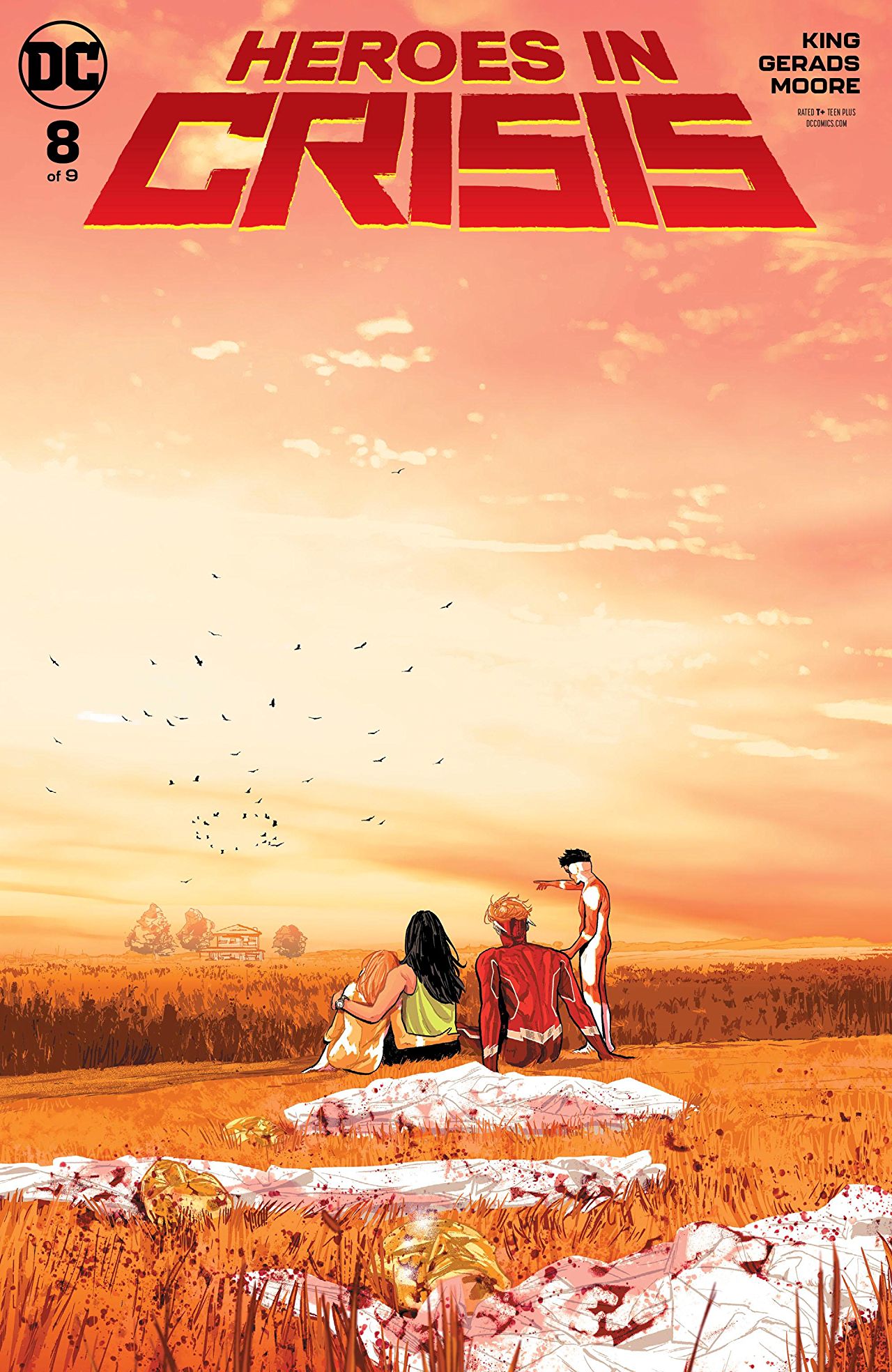 Overview: The culprit of the Sanctuary murders confesses.

Synopsis (spoilers ahead): Wally West starts off by saying that what follows is his confession.  He explains how he was at Sanctuary to get help but never really felt like it was working.  He felt alone and as if he was the only person struggling with pain.  In order to reassure himself that he wasn’t alone, he decides to go and collect every scrap in information on everyone at Sanctuary.  After looking at it, he feels overwhelmed emotionally by all the pain and goes outside to get some air.  This triggers an alarm and other patients at Sanctuary come out to help him.  Wally accidentally loses control of the speed force and kills everyone.

Shaken by what has happened, he realizes that Booster Gold and Harley Quinn are the only two who haven’t exited Sanctuary.  Wally uses his speed and access to Sanctuary’s tech to make it appear to Booster and Harley that the other person killed everyone.  Wally steals Booster’s tech and time travels five days into the future where he kills himself.  He brings his dead body back to the past where he makes it appear as he died alongside everyone else.  His purpose was to give himself time to do something good in the five days and tell the truth.  His confession is revealed to be a video sent to Lois Lane.

Analysis: I thought this was a very heavy issue and one that requires a second read to fully process.  The general reaction of comic fans seems to be outrage over the depiction of Wally West.  I’d like to offer a counterpoint to that.  I don’t have the same attachment to Wally as a character as others may have, but I do not think the character is “ruined” or anything like that.  I thought this issue was well written and meant to be something that does feel personal to readers.  Right from the first page, we have three panels of Wally looking directly at the reader almost as if he’s speaking to us when he offers his explanation of what happened.

Wally’s trauma isn’t only the loss of his family, it’s the loss of an entire timeline.  He’s questioning reality itself and feels completely disconnected from everyone.  He doesn’t even feel that his friends are being truthful when they call him a “symbol of hope”.  He feels alone despite Sanctuary telling him that he isn’t.  He can’t trust Sanctuary because he feels like he can’t trust reality.  In a moment of weakness, he decides to find out for himself if he isn’t alone.  Paradoxically, when he realized how much pain others were dealing with, he wants to be alone with his own.  His actions after accidentally killing everyone are not those of a person who is thinking rationally and are not in line with how Wally has historically been depicted, but I will say that they do “make sense” for someone in his emotional state.  Wally must feel shame, guilt and a need to rectify his own mistakes.  I think these three sentiments were the driving force behind him trying to cover things up for five days.  I also do not think his confession video to Lois is the full extent of him “doing something as good as what (he’s) done bad”.  I think we will see him do something in the final issue that will undo the deaths.

The standout page in this issue for me is Wally explaining why he chose the Puddler’s name because it sums up what this entire story has been about.  When Wally is talking about the Puddlers dying young to make metal to make the world beautiful, he’s really talking about how he views the role of heroes in the world.  Heroes take on all that is wrong and corrupt in the world.  They absorb pain and sometimes die just to make the world a better place.  I think that’s what he thinks everyone at Sanctuary is dealing with.

The art was very good, which is to be expected from stars like Gerads and Moore.  This might be the first King and Gerads story I’ve read that doesn’t feature a single page with a nine-panel grid.  I think that was a good decision for this issue because it makes everything feel closer and more intimate if that makes any sense.

Final Thoughts: A very well crafted issue that explains the complicated emotions Wally is dealing with as he struggles to get rectify events that spiraled out of his control.  I encourage everyone to read it and reserve judgment until the story has concluded next month.