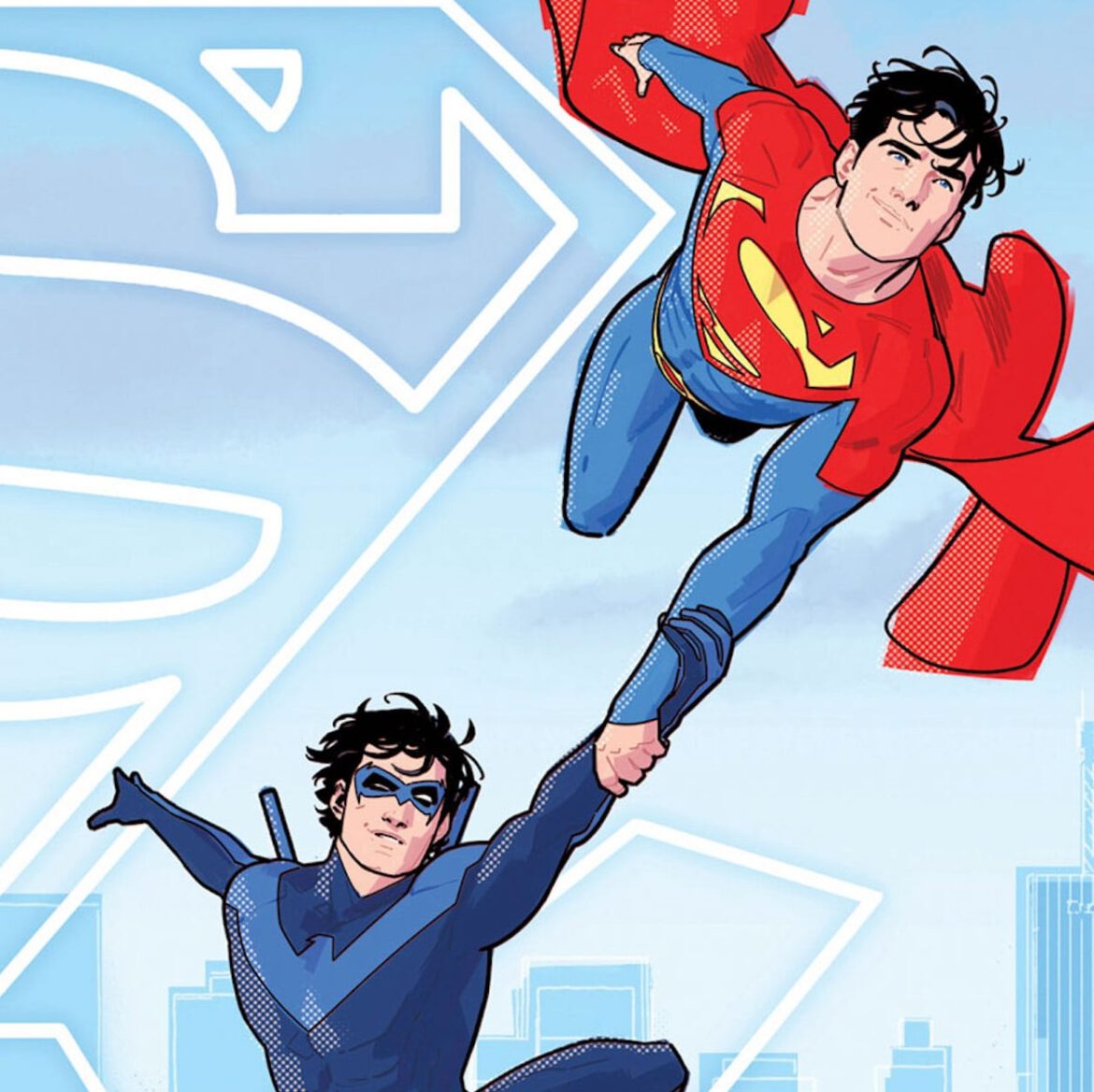 Overview: In Superman: Son of Kal-El #9, we see the conclusion to the World’s Finest Sons investigation into Luthor’s involvement in the murdered superheroes, which started in Nightwing #89.

Synopsis (spoilers ahead): Continuing where we last left off, Superman: Son of Kal-El #9 has Nightwing begin taking down subsidiary illegal businesses related to Lexcorp, all for the purpose of baiting the Rising. When the three superpowered killers appear, Superman (Jon Kent) arrives and easily holds them at bay. Knowing one of their members is about to be compromised, President Bendix activates a bomb in one of his men’s brains, blasting him into a spray of light in Jon’s own hands.

At the Kent household, Dick and Lois discuss Truth’s mutual goals for disseminating corruption alongside Dick’s use of his fortune. Dick thinks Lois would be the perfect figure to lead Truth into a more trusted reputation, rather than continue to hide in secrecy. Upstairs, Jon’s reeling from the battle earlier that day. Dick relays to him that the feelings of guilt aren’t unique to only him and that what they can do for each other is be there for one another. Jon tells Dick about his five-year imprisonment on the Phantom Earth and confesses that he wished Dick were there to save him like he had years before when Jon was a boy. Dick offers Jon mentorship before Jay runs through the wall presenting released footage of the exploding Rising henchman in Jon’s arms from earlier. Lois agrees to join Truth to ride head on the story, and Dick once again promises Jon that he’ll no longer have to be alone.

Yes, Jon has the captioned narration, but I feel that the focus is on the guest star in a way that doesn’t differentiate from how the Blüdhaven hero is written in his monthly series. I’m trying not to lay this observation on too thick as heavy criticism, but Taylor clearly adores Dick Grayson. During the fight, even when Dick is out of the action, we focus on him falling and flying to safety. The key moment, Jon experiencing in slow motion the Rising member’s death, is rightfully kept in his head, but the rest of Superman: Son of Kal-El #9 reads almost as though Nightwing’s been out of action for a while and this is his big return. Except it’s not, which makes it feel like a Nightwing book.

I’m just working my way through the appropriate measurement of focus for a traditional team-up. When Robin (Tim Drake) appeared in Taylor’s third issue of the Nightwing run, the focus was on his interplay with Dick rather than showing him off. That was a clear nod to the early days of Chuck Dixon, so the context and intent is different. Here, Taylor’s main thematic interest is building another brotherly relationship between Dick and a younger hero. I can’t say it doesn’t work, especially with their “origin story” of meeting we saw in the last issue. I suppose my confusion is why this had to be a crossover and only a two-parter at that. Will Dick be in the next issue of Son of Kal-El? Will the murdered heroes plot be resolved in Superman SOK #10 or Nightwing #90? And are we going to see the Truth organization included more in Nightwing adventures as Dick continues his work to rehabilitate Bludhaven?

None of these questions are disqualifying the enjoyment of the issue. Bruno Redondo pulls double duty penciling this guest appearance, and at the moment he’s probably my favorite DC artist working in the biz today. That’s saying quite a lot, with the likes of Dan Mora, Gleb Melnikov, and especially Jorge Jiminez all vying for the title of rising stars. Redondo has such a command over facial expressions and anatomy, as well as storytelling chops to keep me stuck on the panels a second longer than I typically might. There’s another fun gag with Dick’s t-shirt being a Comics Code Authority sticker, and an even funnier sign on the van the gun smugglers are using at the very beginning. It’s all great stuff.

In the end, I think while this might be a Nightwing issue in disguise of a Trojan Horse Jon Kent comic; it runs the long game of continuing to cement Jon’s place in the DC Universe. I’m personally only so familiar with Jon Kent. I read the odd Super Sons issue here or there, and like most of DC fandom was confused as to why he was suddenly aged up to an older teenager. But in addition to being Metropolis’ Superman and being the first major queer hero in the Superbooks since Maggie Sawyer, investing another hero friendship in Nightwing is a smart move to keep us interested. It could’ve been other characters, like another Titan or Conner or Tim, but Dick is probably the most reliable character to confide in, so it works as a function of preserving legacy.

Another solid Taylor and Redondo issue, even if it's odd to be reading this as a Superman comic, and not Nightwing, despite almost everything to the contrary.