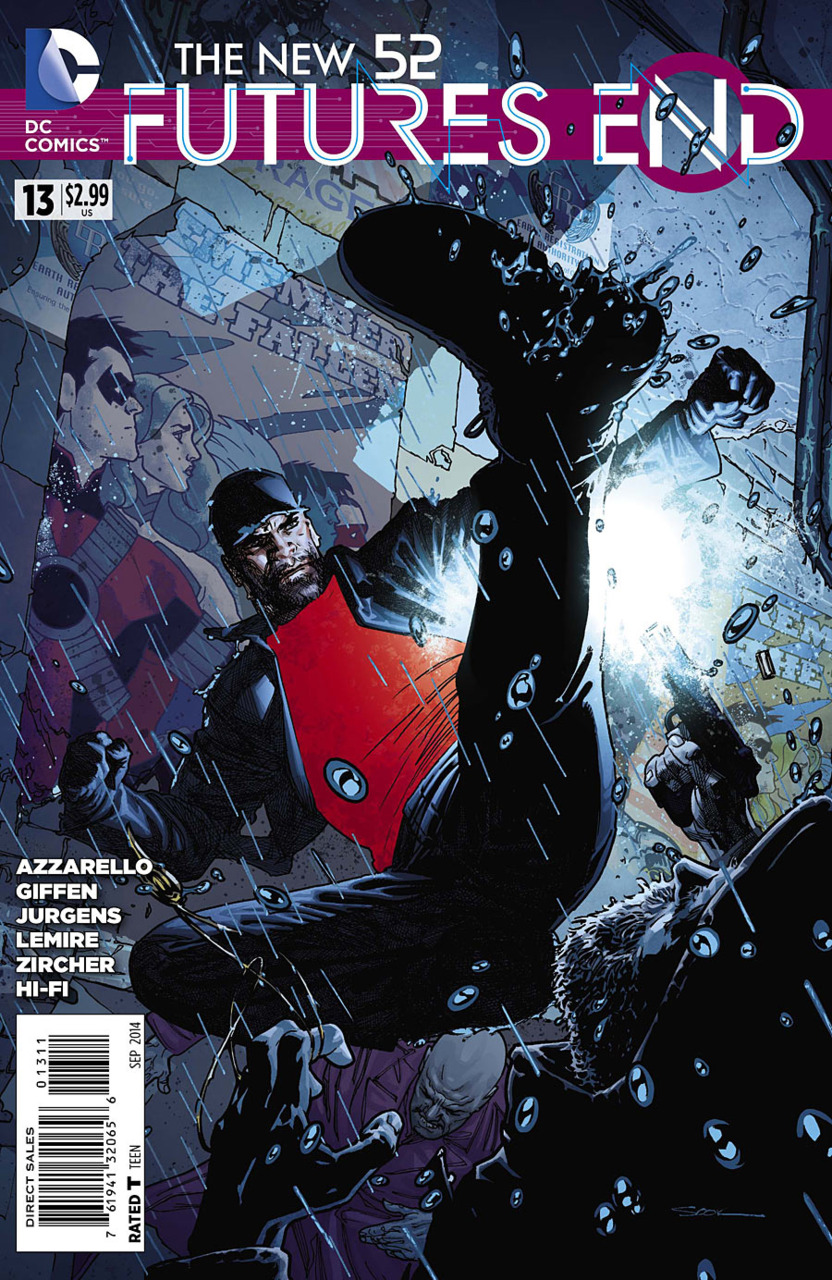 Futures End still is not at the pace that Batman Eternal is at now, but it hints at some very cool things coming up. However, I do feel like I say that every week. I’m getting bored of the building. We just need to get on with it already. Give us a little more story progression! I’m still sticking with it though and I hope it pays off.

As I look at the covers for future issues and the interior art for next issue, I can start to see the connection. Emiko says that Barda’s friends are still alive & held prisoner. Is this Barda from Apocalypse, or from Earth-2? With the World’s End weekly and with Earth 2 having a battle with Apokolips coming, I could see the tie in there, where the New Gods help the Earth-2 heroes fight Apocalypse. Thus, when they come to Earth Prime, they imprison them all.

Tim seems to be getting back in the swing of things, even if he doesn’t want to, or isn’t aware of it.

We really get to see a side of Mr. Terrific that we haven’t seen so far. He really feels the weight of the world on his shoulders and therefore lets his morality take a back seat. So he’s probably not the jerk, that we’ve seen him as so far.

Grifter is learning more about the creepy place he is being held.

Some Kirby creations are hinted at, that I hope makes it into the book soon. And a very popular villain begins to make his play.

We open in the Wounded Duck bar, where a man is robbing Madison and “Cal” (Tim Drake). He takes the money, as well as the necklace that Tim gave her. Once he’s gone, Madison is shaken up & is surprised that Tim didn’t fight back, still thinking that Lois is right and “Cal” was Red Robin. Tim promises to get her a new one. Later that night, Tim tracks down the thief and a dealer of his. Tim beats them both and takes the necklace.

Mr. T is having trouble sleeping, continuing to think of the new Batman, as well as the new robotic android that he says “shouldn’t exist”.

On Cadmus Island, Fifty Sue and Grifter are trying to sneak in and have a look at the base. They find a group of ‘Earth-2 normals’ who are scientists building OMAC’s.

Key, Coil and Plastique are talking about the new Batman and how they don’t like the idea of working with Terrifitech’s most wanted. Terry walks in and while Key and Coil tell him that they can’t work with him, Plastique makes a paper airplane, and tosses it at Terry, knocking him out, as it explodes on impact.

Barda and Emiko are walking down the while Barda gives us the backstory on how she got to Earth. Coming from her world, she made her way to Earth along with many others. But the war with Earth-2 made this world make them out as invaders. Barda believes that the other heroes from her world, even her husband, was killed in an explosion. But Emiko says that they are alive and held prisoner. A girl comes up & asks for them to help her find her parents. They agree, but the girl leads them to DEATHSTROKE!

While this issue wasn’t anything special, I’m very excited for what it hinted at bringing.