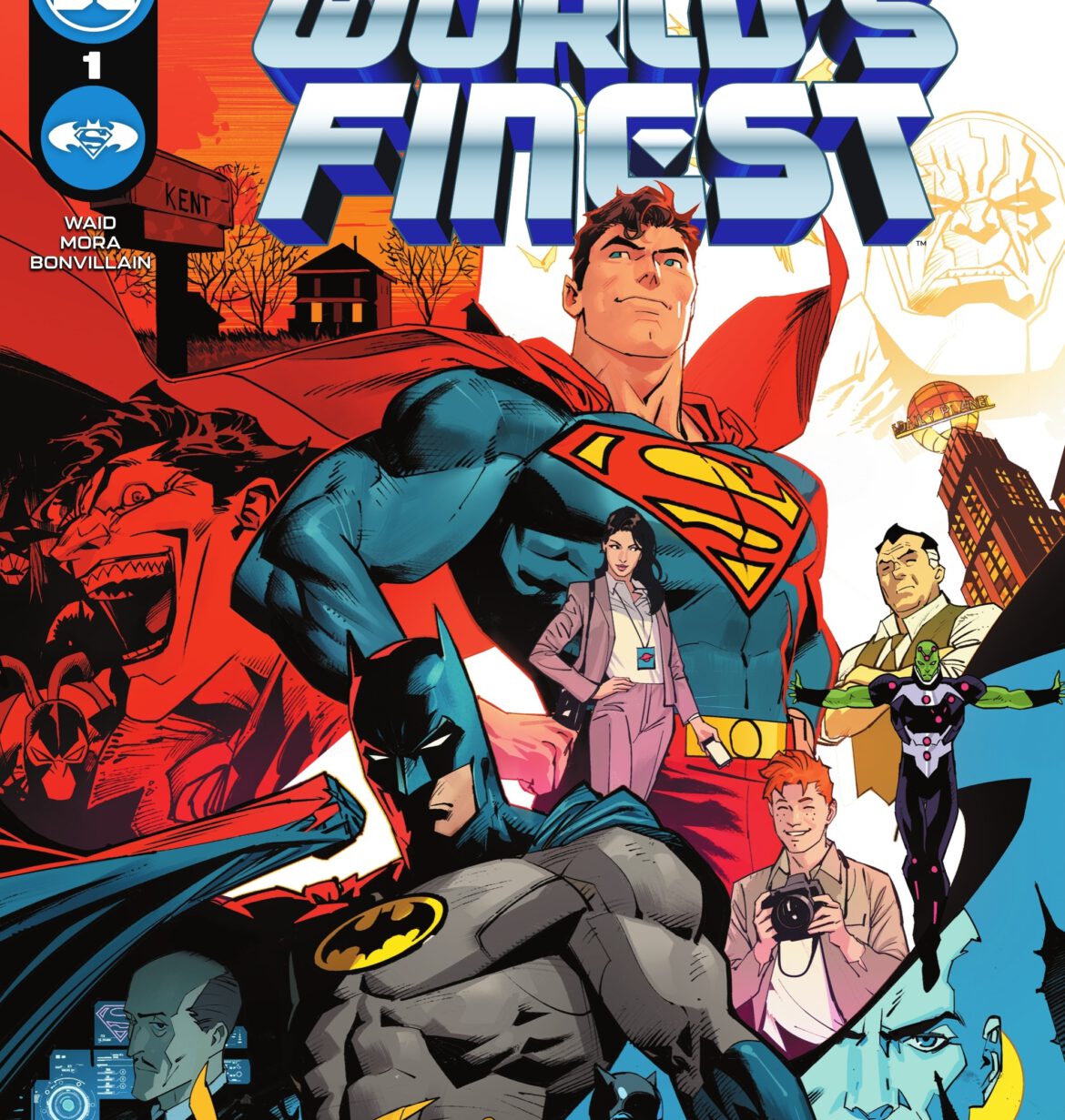 Overview: In Batman/Superman: World’s Finest #1, Superman and Batman are attacked by Metallo and Poison Ivy, who are working for an unknown group of assailants intent on taking Superman down once and for all.

Synopsis (spoilers ahead): Batman/Superman: World’s Finest #1 begins in the not-too-distant past in Metropolis, Poison Ivy attacks the Daily Planet. While Perry White, Jimmy Olsen, and Lois Lane make a run for it, Batman and Robin (Tim Drake) arrive to head off Ivy. Superman joins the fray, asking Batman who gets to turn Ivy into the authorities. Before the heroes can make a decision, Metallo enters.

Batman momentarily ruminates on something Ivy said only a minute ago, that “we were told this would draw out” Superman. Springing into action, Batman tells Superman to get away in order to avoid Metallo’s Kryptonite-powered core.

Ivy’s plants tangle around Batman and Robin, leaving Superman helpless to Metallo’s attack. Batman frees himself, but Ivy counters by tossing Robin off of a rooftop. While Batman leaps to Robin’s rescue, Metallo jams a syringe full of a dozen shards of different Red Kryptonite crystals into Superman’s chest.

After saving Robin, Batman takes down Ivy. Robin, meanwhile, pulls out his battle staff and jams it through Metallo’s Kryptonite heart, but it’s too late. Superman is already screaming from the Red Kryptonite coursing through him.

From afar, two silhouettes watch the battle. They are pleased, noting that the fun is about to begin.

Years before, Batman deduces where Penguin has abducted and held captive Robin (Dick Grayson). He relays this information to Superman, who will be able to circumvent the trap Penguin clearly has laid for Batman.

At Penguin’s secret location, Robin taunts his would-be captor. Penguin reveals that Lex Luthor leveled up Penguin’s arms-dealing game by introducing him to soldiers from the Anti-Universe of Qward. These soldiers are eager to trade their advanced weaponry for resources from Earth.

Superman arrives, distracting Penguin and some soldiers from the Anti-Universe while Batman frees Robin. The three heroes then take down Penguin and his cohorts. After the battle, Batman thanks Superman, promising to always have Superman’s back. The two shake hands.

Back in Metropolis, Superman’s body goes through random, and extremely painful, transmutations atop the Daily Planet. Lois and Jimmy arrive, and together with Batman and Robin, they try to talk through how to help Superman. Before they can contact an appropriate doctor, Superman panics and flies off.

Superman crashes back down to the city level. Jimmy finds him, but before he can ask Superman how to help, the Man of Steel literally transforms into a man of steel.

Just then, Cliff Steele, Rita Farr, and Larry Trainor from the Doom Patrol arrive, and they take Superman with them for Doctor Niles Caulder to analyze. Right as they’re about to leave, Superman transforms back into his normal self and attacks. While Batman, Robin, and the Doom Patrol try to clear the citizens of Metropolis and usher them off to safety, Superman, thinking his friends are General Zod, Ursa, and Non, barrages them.

With the Doom Patrol down, Batman runs towards Superman. Under the spell of Red Kryptonite, Superman sees Batman as Lex Luthor. Batman reasons with Superman, throwing everything he knows about Clark and their shared history in order to convince Superman to trust his voice. He ends his speech by reiterating a line Superman said to him all those years ago when they busted up the Penguin together. Superman realizes that it’s truly Batman and stops.

Different powers start going off, so Superman vibrates at super-speed in order to contain himself. Larry Trainor, the Negative Man, uses his powers to emulate a red sun, depowering and knocking Superman unconscious.

At Caulder Mansion, Negative Man continues to keep Superman under with his powers. When Batman shows the syringe that Superman was injected with, Negative Man notes that he recognizes the horned symbol on it. Before that can be explored further, Elasti-Girl tells them that Dr. Caulder is ready to operate.

Analysis: World’s Finest was a classic DC Comics series that ran from the 1940s through the early 1980s that regularly paired two or more heroes together in order to stop an elaborate crime. While other heroes rotated in and out of the series, two of the more common characters paired together were Superman and Batman, with Robin often joining to round out the trio.

It makes sense then that this revived series harkens back to that classic series with a team-up between Superman, Batman, and Robin. The story, plotting, and pacing of this book feels very much like a classic superhero adventure. Batman/Superman: World’s Finest #1 is fast-paced and light in tone compared to most of the DC Comics on the shelves, but it doesn’t steer clear from danger, either. Writer Mark Waid and artist Dan Mora offer up an exciting team-up that does a great job of balancing classic DC cameos and references with ever-escalating plotting.

For starters, this thirty-two-page story is LOADED with characters. The main battle focuses on Superman, Batman, and Robin (Tim Drake) battling against Poison Ivy and Metallo, but the story manages to weave in Lois Lane, Jimmy Olsen, Perry White, Penguin, and the Doom Patrol, as well as nods to General Zod, Ursa, Non, Lex Luthor, and Robin (Dick Grayson), without coming across as exhausting. That’s a feat in itself, and credit must be paid to artist Dan Mora and colorist Tamra Bonvillain for putting together such a bright, colorful, and eye-catching book.

Mora’s paneling is electrifying, and he’s able to take such a complicated and involved story from Waid and lay it out in a way that crams a lot of movement and action into relatively small spaces without confusing readers. Along the way, Mora treats readers to visual callbacks to classic costumes (like Silver Age Penguin and Dick Grayson’s old-school Robin outfit) and references to DC lore from decades back (like one of Batman’s earliest Batmobiles in the background of the Batcave). It’s visually dense, and one can tell a lot of effort and love was put into making this initial issue worthy of the series’ namesake.

As far as the story goes, much of Batman/Superman: World’s Finest #1 plays out like a refresher course on who everybody is and how they relate to each other, which is paired with that frenzy of aforementioned references and unique cameos. It makes for a great inaugural issue to this new World’s Finest series, and so long as the story grows from here, the potential exists for this to become a gripping read long term. A Superman stricken with Red Kryptonite isn’t the freshest of launching points, but for the relaunch of the World’s Finest series, it works well enough to draw readers into the concept of what this book could be. And what this book could become seems to be a globe-trotting action/adventure.

Right off the bat, readers are introduced to two villains who are only here to lure out Superman, and we’re promised at least two other silhouettes of villains watching from afar. One seems to be Steppenwolf, which would indicate that maybe Darkseid will be involved at some point. It’s hard to guess who the other villain is, but one could presume it’s Lex Luthor (because of course it’s Luthor!).

Before readers can dwell on that too much, the story whisks us away to Caulder Mansion, which sets the precedent that this book will be one in which Batman and Superman will be battling a whole army of foes across a spectrum of classic DC locales. Readers can only wait and see how this series shakes out, but the setup certainly is something to behold.

Batman/Superman: World’s Finest #1 is a colorful throwback to another era, but it’s modern enough to keep readers excited and turning the page.